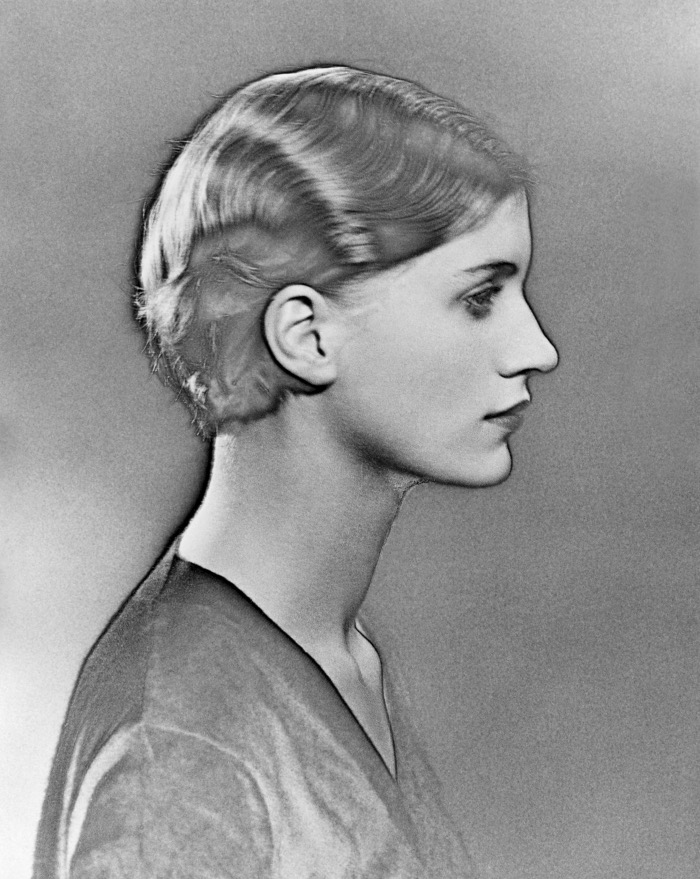 Model, photographer, muse, war reporter and 20th century icon.
Lee Miller was all this and much more!

Her life is inextricably linked to Man Ray, who was first a teacher, then a love and finally a friend. Lee Miller’s photographs recount this bond and also her life dedicated to art and photography.
Lee Miller was a pioneer of surrealism in photography, putting her on an equal footing with Man Ray, whose personality she always overshadowed both during her life and in the years to come.

Life and photographs of Lee Miller 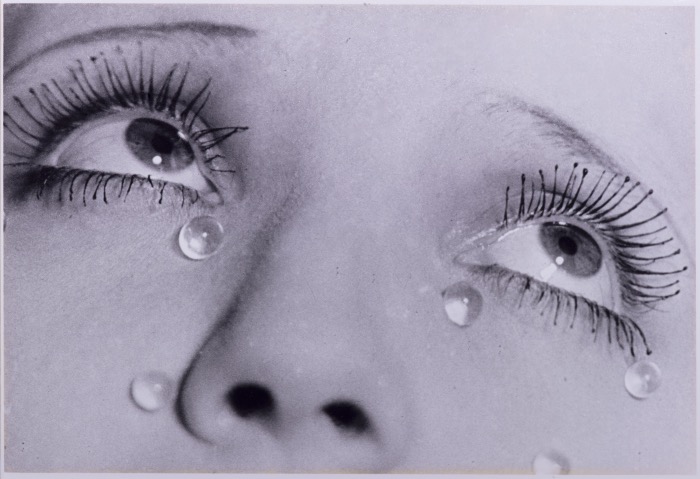 Before Lee Miller’s photographs there was fashion.
She was a model and muse in the 1920s, after a chance meeting with the famous publisher Condé Nast who turned her into a model for ‘Vogue’.
It was then Georges Lepape, the leading fashion illustrator of those years, who portrayed her face for a cover of “Vogue” (USA) in 1927, launching her as a style icon until that notorious shot used without her knowledge for the Kotex tampon advertisement considered scandalous for the time and for which, in part, she decided to leave New York and try to return to Paris and follow her passion for photography.

Back in Paris, Lee Miller worked with George Hoyningen-Huené, a well-known photographer for ‘Vogue’ (France) who revealed her androgynous grace and portrayed her in a jumpsuit and tennis shoes that she wore as an evening dress, and in the famous shot ‘The Divers’, one of the most iconic fashion shots of the 20th century, chosen by Anna Wintour as one of her five favourites from the long history of ‘Vogue’, in which Lee Miller poses with her back to a dock with Horst P. Horst another important name in photography.

Looking at Lee Miller’s photographs, one gets the feeling that he lived an intense life characterised by decisive encounters.
Perhaps the most decisive encounter was with the artist Man Ray, with whom he had a deep and complicated relationship. In fact, he was first his teacher, then a passionate love and finally a friend.

They met in Paris in 1929 and broke up in 1932 after a short period of experimentation, passion and historical photography.
They both exerted a mutual influence on each other’s work, including the photographic technique of solarisation that Man Ray made his own to such an extent that Miller’s work has often been mistakenly attributed to Ray.

The lives of Lee Miller and Man Ray seem to be a whirlwind of decisive encounters, of which we are left with historic shots: Max Ernst, Pablo Picasso, Giorgio de Chirico, Jean Cocteau, Salvador Dali, Dora Maar and Meret Oppenheim.
Surrealism is their defining element and Man Ray’s Surrealist shots of Lee Miller are the most beautiful.
In these images Man Ray tries to investigate and reveal the soul of his muse, her torments, using the camera as an instrument almost as if he wanted to decompose her icy body by portraying the nape, neck and shoulders.

When Lee Miller’s relationship with Man Ray broke down, she returned to New York and opened a successful photography studio, at the time the first founded and run by a female photographer.
The 1930s were an inspiring time for Lee Miller and her famous photographs are of the ‘surrealist holidays’ in the summer of 1937, between Cornwall and the south of France, with Max Ernst, E.L.T.Mesens, Man Ray and Leonora Carrington as well as Pablo Picasso, Dora Maar and Elieen Agar and with what was to become her second husband, the British artist Roland Penrose.

Although the professional and love story between Lee Miller and Man Ray ended, the friendship remained and lasted for almost 50 years. In parallel with their mutual marriages to Aziz Eloui, Roland Penrose and Juliet Browner, the two would always support each other in good times and in more difficult ones, such as during the period when Lee Miller suffered from chronic depression, partly due to a kind of post-traumatic disorder caused by the horrors he had witnessed during World War II. 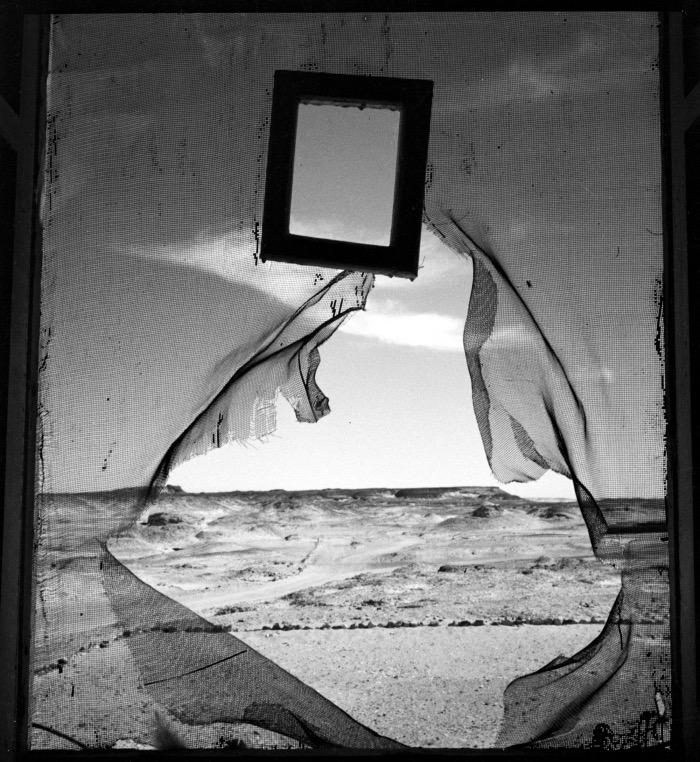 Lee Miller’s story is as gripping as a novel and her life also includes a period spent in Egypt, the homeland of her third husband, Egyptian businessman Aziz Eloui Bey, whom she married in 1934.
Lee Miller was fascinated by the landscape of the desert, the villages and the vestiges of past civilisations, as can be seen in her many fascinating and atmospheric shots, such as the famous ‘Portrait of Space’ with its tent or mosquito net torn towards infinity, which inspired Magritte’s ‘Le baiser‘ (The Kiss) in 1938.

Even her third marriage is destined to be short-lived and in fact Lee Miller soon separates and returns to London, where she works as a photographer for ‘Vogue’ (UK).
It is on the pages of the famous glossy magazine that she publishes fashion and style shots with surrealist lighting and cuts, drawing on her previous life and her connection with Man Ray.

World War II, however, looms over Europe and Lee Miller uses the medium of photography to chronicle it.
She is a war correspondent and photojournalist for “Vogue” and uses her talent to document events such as the London Blitz, the liberation of Paris and the concentration camps of Buchenwald and Dachau.
In 1944 she was credited as a correspondent for the US Army and collaborated with ‘Time Life’ photographer David E. Scherman. His is the iconic shot of Lee Miller in Hitler’s bathtub. 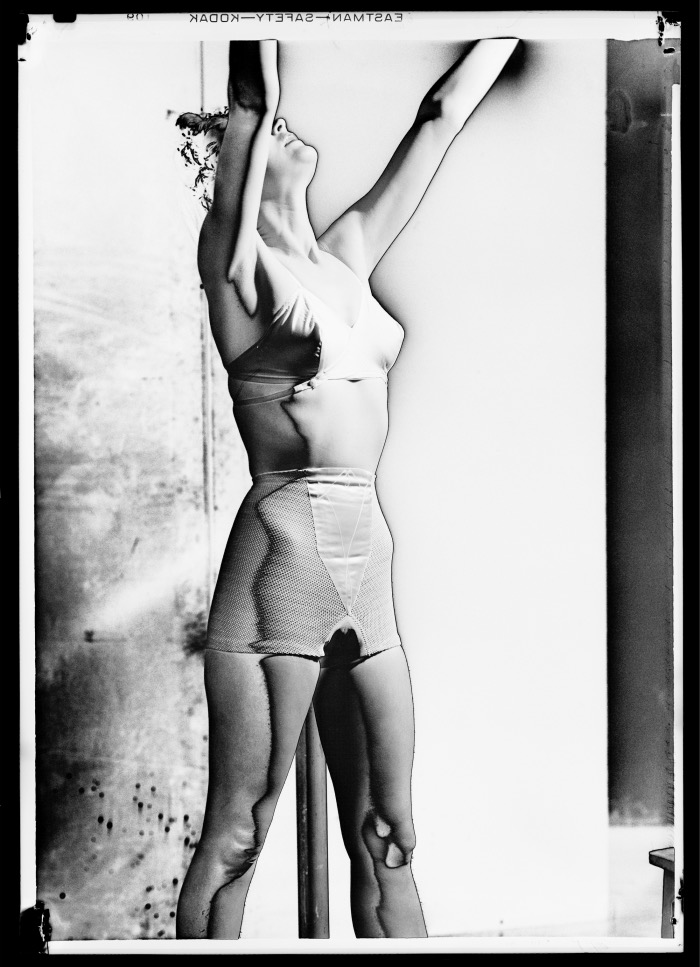 Lee Miller, Corsetry, Solarised Photographs, Vogue Studio, London, England 1942 © Lee Miller Archives England 2022. All Rights Reserved. www.leemiller.co.uk
Here Lee is experimenting again, this time in 1942, in a fashion shoot for underwear at British Vogue Studio in London. As with the silver piano, where she explored the effect of solarisation on the piano’s reflective surface, here she is interested in the effect of the double exposure on the shimmer and stretch of the corset fabric and the shadows on the body.

AN EXHIBITION IN VENICE WITH THE PHOTOGRAPHS OF LEE MILLER

An exhibition in Venice allows visitors to appreciate the photographs of Lee Miller and to discover the contribution she made not only as Man Ray’s muse but above all as a photographer.
For example, it was she who discovered, by chance, and inspired the great surrealist artist with the photographic technique of solarisation.

The exhibition is produced and organised by CMS.Cultura in collaboration with ACP-Palazzo Franchetti under the patronage of the Venice City Council, which has included it in the “Le città in Festa” programme, main sponsor Gruppo Unipol. It presents around 140 photographs by Lee Miller and Man Ray, a number of art objects and video documents, with loans from the Lee Miller Archives and Fondazione Marconi.

The catalogue, published by Skira, is curated by Victoria Noel-Johnson with texts by Ami Bouhassane (Lee Miller’s granddaughter) and Anthony Penrose (Lee Miller’s only son) promoting awareness of the figure of Lee Miller through Lee Miller Archives.

It is thanks to Suzanna, Anthony Penrose’s late wife, that more than 60,000 photographs, negatives, documents, magazines, correspondence and memorabilia were accidentally found in the attic, enabling this exhibition and the rediscovery of Miller’s many lives.

BOOKS TO GET TO KNOW LEE MILLER

Lee Miller/Man Ray. Arte, moda, fotografia. Italian and english edition – A book to learn more about Lee Miller and Man Ray meet in Paris in the late 1920s. She is a famous model for Vogue America and he is already an important Dada-surrealist artist.

Lives of Lee Miller – the biography of the famous photographer, narrated by her son Antony and complete with more than one hundred photographs that render all the charm and strength of an extraordinary and unique woman.