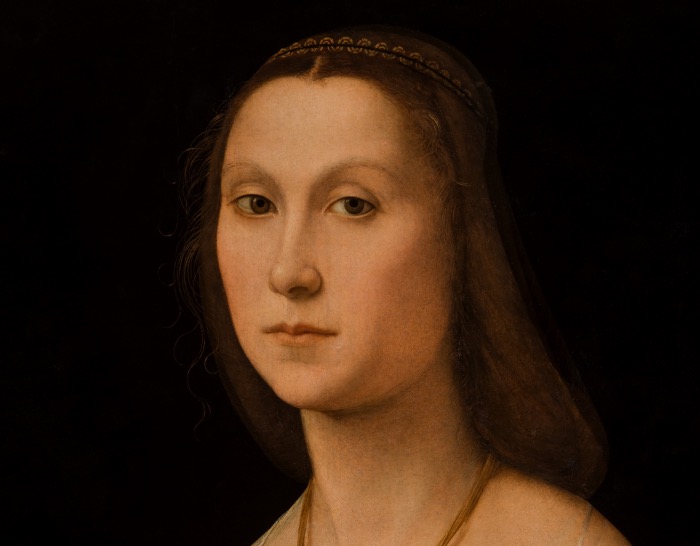 Who was actually Raphael’s young woman (La Muta) and why did the artist correct the work several times?
This portrait has sparked scholarly speculation, prompted investigations in the archives and fuelled many stories, but still has not unravelled its mysteries.

We know almost nothing about the true identity of Raphael’s young woman, but in this post I tell you about the events that have made this work even more fascinating and reveal where you can see it today. 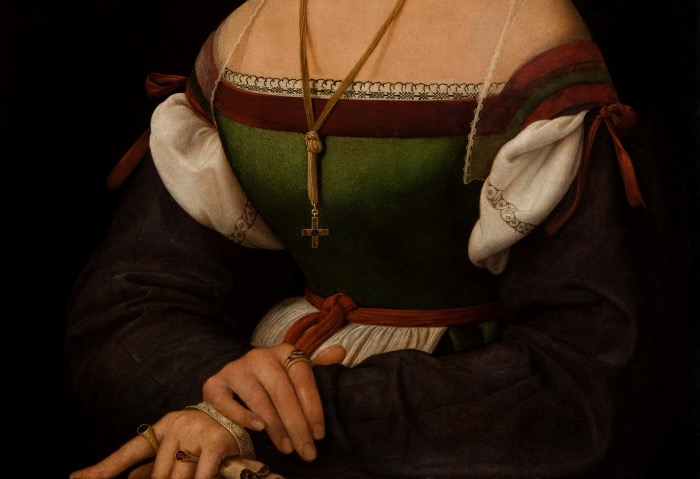 WHO IS THE YOUNG WOMAN BY RAFFAELLO

Among the Urbino artist’s most important works, the Female Portrait known as Raphael’s La Muta is also among his most discussed paintings, mainly because of the identification of the female figure portrayed.
There is no certainty, in fact, as to who is hiding behind the enigmatic face of the young woman portrayed in the painting, whose story begins in early 18th century Florence.

Raphael was one of the great masters of the 16th century, and looking at this work we cannot help but wonder what he is thinking and observing.

In 2014, Raphael’s young woman was subjected to extensive diagnostic investigations that revealed many of the artist’s ‘regrets’, especially in the lines of her face and dress, but did not allow us to proceed with the identification of the figure portrayed.

Some scholars, however, have speculated that the woman portrayed is Giovanna Feltria della Rovere, daughter of Federico da Montefeltro and mother of Francesco Maria, heir to the Duchy of Urbino, who was the one who protected and supported the artist in those years.
It is precisely Raphael’s ‘repentances’ that lead one to suppose that the artist had been able to put his hand to the portrait several times, highlighting its psychological characteristics and deepest feelings that perhaps only he knew.
It was Giovanna herself who wrote a letter of presentation for the gonfalonier Pier Soderini in which she illustrated Raphael’s talent and virtues.
This opened the doors of the Republic of Florence, the heart of Renaissance culture and art, to her pupil.

Despite the veil of mystery that still shrouds it, Raphael’s Female Portrait is one of the most admired works of the Urbino artist along with the fascinating Fornarina.

DESCRIPTION OF THE G BY RAFFAELLO

Raphael’s young woman is portrayed in a three-quarter view, like other portraits of the same period by the artist, who was inspired by the setting of Leonardo da Vinci’s paintings.
The pose allows us to observe the clothing, carefully detailed but not particularly ostentatious, but above all the psychological component.
There is something troubling in this woman’s soul, a veil of sadness in fact seems to be discernible in her eyes and perhaps some regret.

The period in which the painting was made (1507-1508) corresponds to the initial phase of Raphael’s activity, to whom the first important commissions were entrusted, despite the fact that he was only twenty years old.
Between 1503 and 1504, perhaps commissioned by Giovanna Feltria della Rovere, daughter of Federico da Montefeltro and Duchess of Sora, Raphael produced some important works such as St. George and the Dragon, now in the Louvre, and many have speculated that Raphael’s Muta might have been Giovanna herself.

WHERE TO SEE RAFFAELLO’S YOUNG WOMAN

Raphael’s Young Woman is in Urbino, in the Duchess’s Room of the Galleria Nazionale delle Marche.
Its journey, however, begins in Florence.
In fact, we are certain that the painting was in Palazzo Pitti, among the possessions of the Grand Prince of Tuscany Ferdinando de’ Medici, between 1702 and 1710.
Later, in 1713, it was moved to the Medici family’s villa in Poggio a Caiano and 60 years later it can be found in the Uffizi, first in the Hermaphrodite room and then in the Tribuna.

Nothing is known about its location in the 17th century, however, as the hypothesis that it was in both is too general for us to identify the subject of the painting.

Since 1927, it has been in permanent storage at the Galleria Nazionale delle Marche where, in 1975, it was stolen together with other works and then recovered the following year in Switzerland. 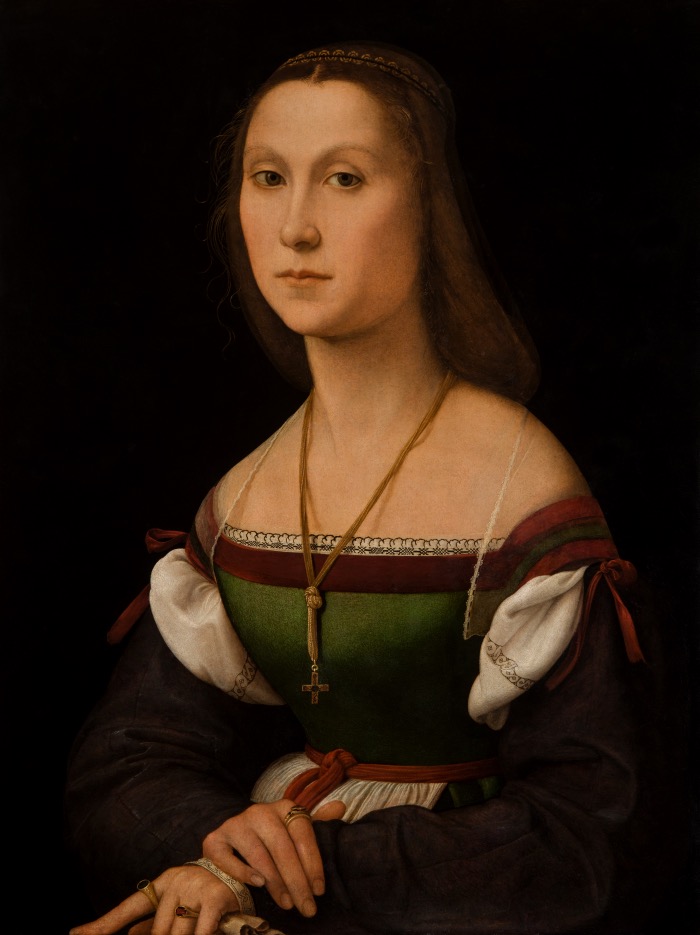