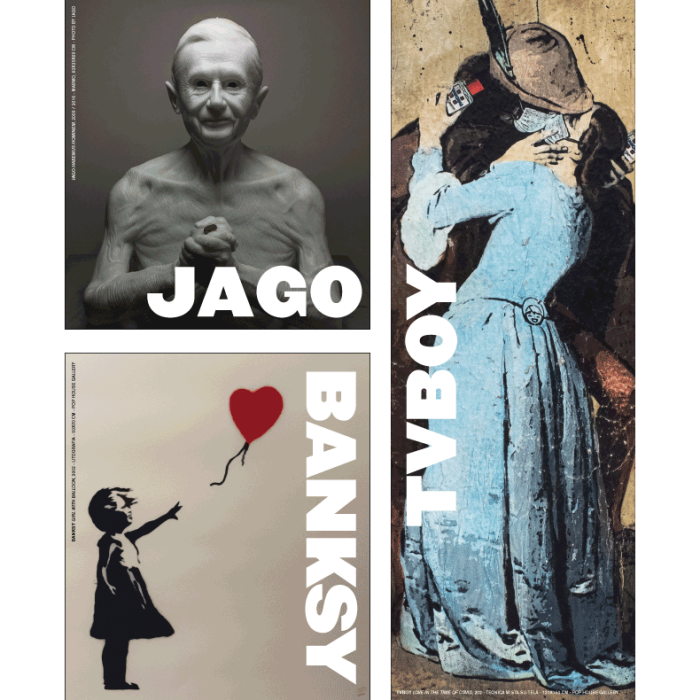 THE COUNTERCURRENT STORIES OF JAGO, BANKSY, TVBOY ON SHOW

The works of Jago, Banksy and TvBoy on display in Bologna to create a ‘virtual’ dialogue between the mysterious British artist and two of Italy’s most influential artists.

What do these three artists have in common to justify an exhibition that, with 60 works on display, presents itself as one of the most important on the contemporary art scene?
What they have in common is the fact that they have subverted the rules of art, refusing to become part of a system that squeezes artists rather than enhancing them, excludes the best to make room for those who are better at fitting into an economic system. 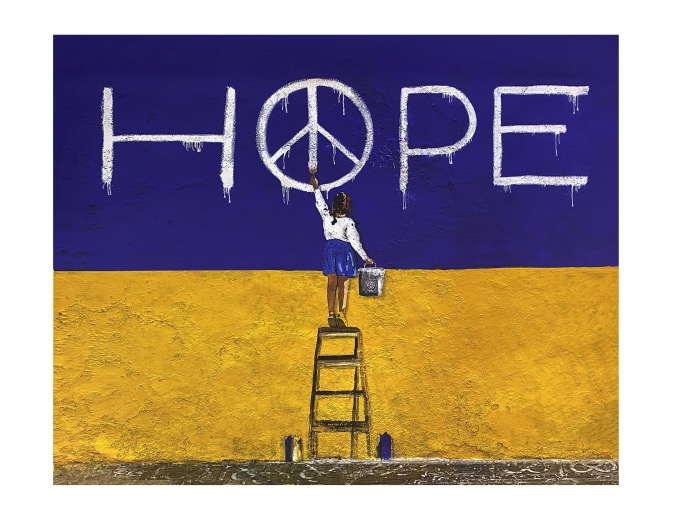 An event like this was needed!
Jago, Banksy and TvBoy on show in Bologna are a slap in the face of the art system that is difficult to change and almost impossible to conquer.

These three artists set a precedent and got their art talked about by reaching the heart of the general public, dispensing with galleries, curators and all those people who should make life easier for an artist but end up complicating it.

The exhibition Jago, Banksy, TvBoy and other countercultural stories takes the form of a triple monograph showing the most significant works by each of them: from Banksy’s Girl with Baloon to Banksy’s Bomb Love; Circulatory Apparatus and Memory of Self and other works by Jago; the Kisses series and the Heroes series by TvBoy, as well as iconic pieces by the artist such as the ‘modernised’ couple that created the huge work that welcomes people to Rome Fiumicino airport or the Gino Strada with the ‘stop war’ sign that appeared on the walls of Milan a few months ago.

These three nuclei are also joined by many works by various generations of artists who have taken inspiration and inspiration from them, or who simply fit into the “countercurrent” path that characterises them: fromObey – on show with his famous Hope poster, created in 2008 to support Barak Obama’s presidential campaign – to Mr. Brainwash (among others, a specimen of his Mona Linesa), from Ravo and The Girl with the Pearl Earring to Laika and her celebrated Not this “game” and Pau with his Santa Suerte series.

The exhibition in Bologna is an itinerary divided into four sections that takes the visitor through the affinities between these artists and relates them to trends in European art and street art. 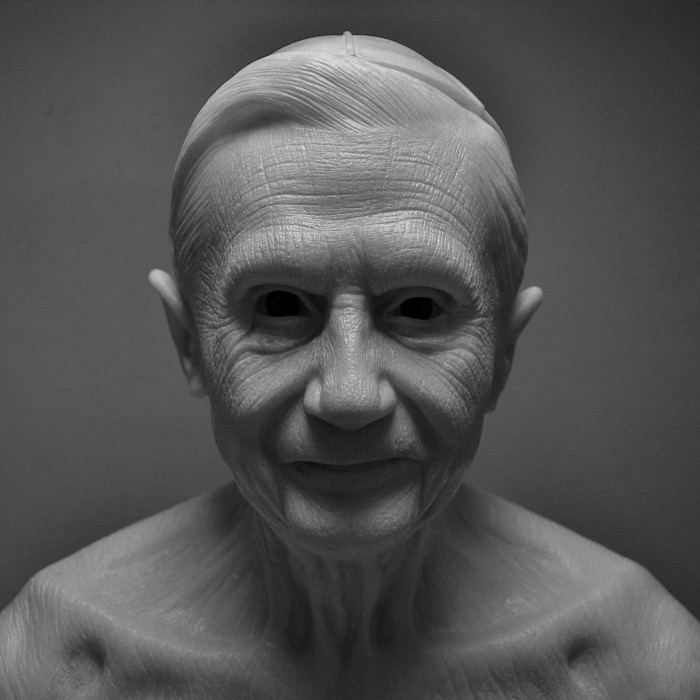 Jago
The first section is dedicated to Jago.
The Italian artist, from Frosinone, is known for his sculptures and is a celebrity on social networks, which he uses to promote his work.
Jago’s artistic research is rooted in traditional techniques and has a direct relationship with the public thanks to the use of videos and social networks to share the production process.

At the age of twenty-four, upon presentation by Maria Teresa Benedetti, he was selected by Vittorio Sgarbi to participate in the LIV Venice Biennale, exhibiting the marble bust of Pope Benedict XVI (2009) that earned him the Medal of the Pontificate. The youthful sculpture was then reworked in 2016, taking the name Habemus Hominem and becoming one of his best-known works.

Since his first solo exhibition in Rome in 2016, he lives and works in Italy, China and America. He has been a guest professor at the New York Academy of Art, where he holds a masterclass and several lectures in 2018.
Following an exhibition at the Armory Show in Manhattan, Jago moved to New York and here he began the realisation of Figlio Velato, permanently exhibited inside the Cappella dei Bianchi, in San Severo Fuori le Mura in Naples.

In 2019, on the occasion of the ESA (European Space Agency) Beyond mission, Jago became the first artist to send a marble sculpture to the International Space Station. The work, entitled The First Baby and depicting a foetus, returned to Earth in February 2020 under the custody of the mission leader, Luca Parmitano.
In November of the same year, he realised the installation Look Down, an image of an infant nude then temporarily located in Piazza del Plebiscito in Naples, now in the Al Haniyah desert in Fujairah (UAE).
On 1 October 2021, he instead installed the work Pieta in the basilica of Santa Maria in Montesanto in Piazza del Popolo in Rome.
In 2022, Jago’s works are on show in Rome, at the Palazzo Bonaparte, with his first major solo exhibition. 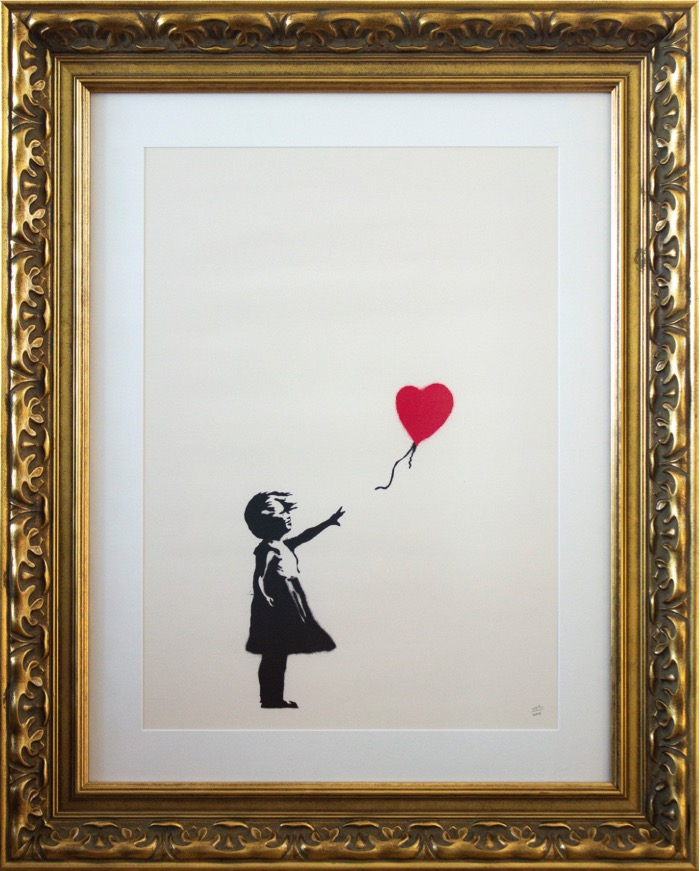 Banksy
The second section is entirely dedicated to Banksy, the British artist who has maintained a mysterious anonymity for years but does not cease to provoke discussion and reflection with his ironic and merciless works against today’s society.

Terrorism, war crimes, economic crisis, bullying, labour abuses, immigration, there is no issue in contemporary society that Banksy does not address.
He is probably the most famous but also the most controversial street artist in the world, who has created with his works a subculture in his own right and capable of generating discussions and alternative points of view, also encouraging a new revolution in the art world.

What is most shocking is the speed, the immediacy in representing burning issues of global current affairs in his works. Banksy does not need a curator to explain his works because they are immediately understandable at all latitudes and by all social strata.
City walls, building staircases, the walls of the most anonymous buildings and the corners of suburban streets are an open-air gallery for Banksy, a space to be conquered by the power of art and to suggest reflections that mark people’s souls and hearts.

While it affects the whole world, Banksy’s artistic production has created a ripple effect, stimulating many young artists to continue to present their works directly in the streets. 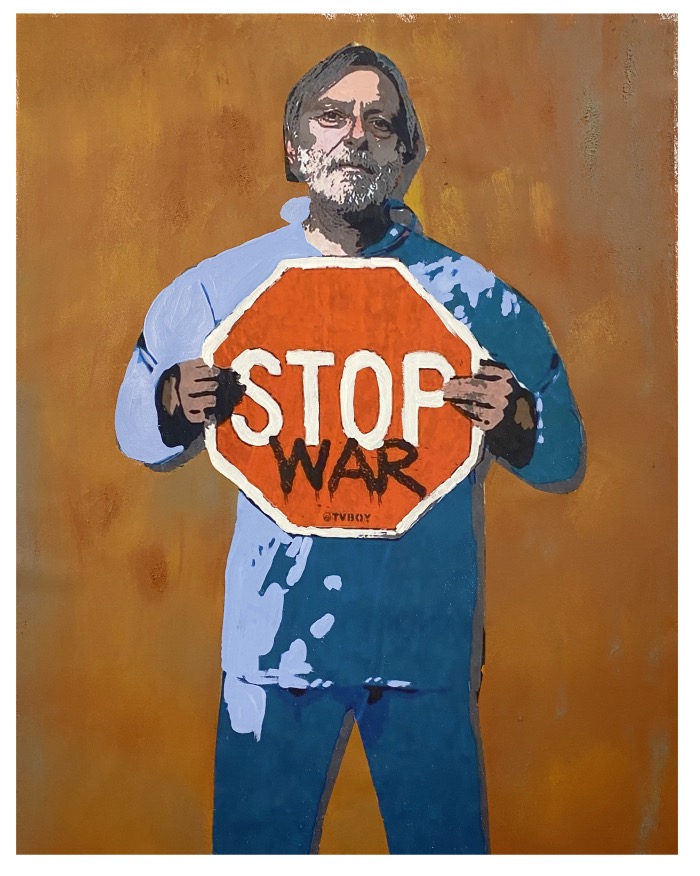 TvBoy
TVBOY, born in Palermo in 1980 but raised in Milan, is one of the most famous Italian street artists at the moment.
In 2007, he is one of the protagonists of the Street Art – Street View exhibition, the first urban art exhibition promoted in Italy by an institution, which in a way will bring about a different public awareness of this type of art.

TVBOY, whose real name is Salvatore Benintende, certainly looks to Pop Art with his works, but also to the world of comics and video games. He has invaded the streets of Italy, and beyond, with his famous ideal kisses between contemporary icons (often in opposition), not infrequently becoming the most popular image in the media to explain political and social changes.

Its strength is its continuous, exaggerated, ravenous production. TVBOY aspires to become an image encyclopaedia of contemporary society and is succeeding.

FROM ANONYMITY TO REALITY, NEW SPATIAL CONCEPTS, BUT WITHOUT LIMITS.
The fourth and final section of the exhibition brings together the sacred and the profane, young promises and recognised masters, classicism and subversion.
Beyond Baroque and Rococo, Andrea Ravo Mattoni’s graffiti brings the masterpieces of modern art normally displayed in museums alive and present.

Technique and size are its hallmark, spray cans replace brushes and canvases become large walls, bringing the most important masterpieces of Italian art outside museums and allowing everyone to experience the painting without any filter or limitation.

The wall, the utmost expression of Street Art, becomes the frame for street signs and wooden fences; elements that we normally find on the street become the protagonists of the works of one of the most famous and controversial street artists, Thierry Guetta, alias Mr Brainwash, who began by befriending and filming some of the world’s most influential artists, including Banksy (followed during his incursions at the Tate Britain and on the wall dividing the West Bank and Israel).
Quotes from the art world, references to consumerism and the culture that has dominated our society in recent decades are amalgamated with an omnivorous ultra-pop vision generating, according to the artist himself, works that make people happy, bringing joy, colour and positive messages. A clear summary to say that life is beautiful!

A strong bond with the material that goes against the current, and imposing itself on today’s digital abuses, is found in Pau’s figures poised between the sacred and the profane.
Matrix carving, home-made printing process and hand retouching of each individual print with mixed techniques are the processes by which Pau creates his personal goddesses of Fortune, an ideal combination of Greek mythology, superstition and Catholic iconography. With Santa Suerte, Justice is represented as a blindfolded goddess, symbolising the principle of her impartiality, portrayed as a woman who cannot look anyone in the face; a vision of Justice that, almost fatally, tends to join that of Fortune!

With the disenchanted and ironic vision of Laika, a synchronically independent, mysterious and free artist, attention remains alive, as tenacious as her posters and stickers, ephemeral tableau vivants, which attract interest and glances as we pass by on the street.

You can say a lot with paper, in fact you can say everything!
Hope is a paper poster that stands for hope and has been the most effective American political illustration since Uncle Sam.
Created by Obey for President Barack Obama’s election campaign, this work is the symbol of a revolution: the victory of the first African-American to hold the office of President of the United States of America. 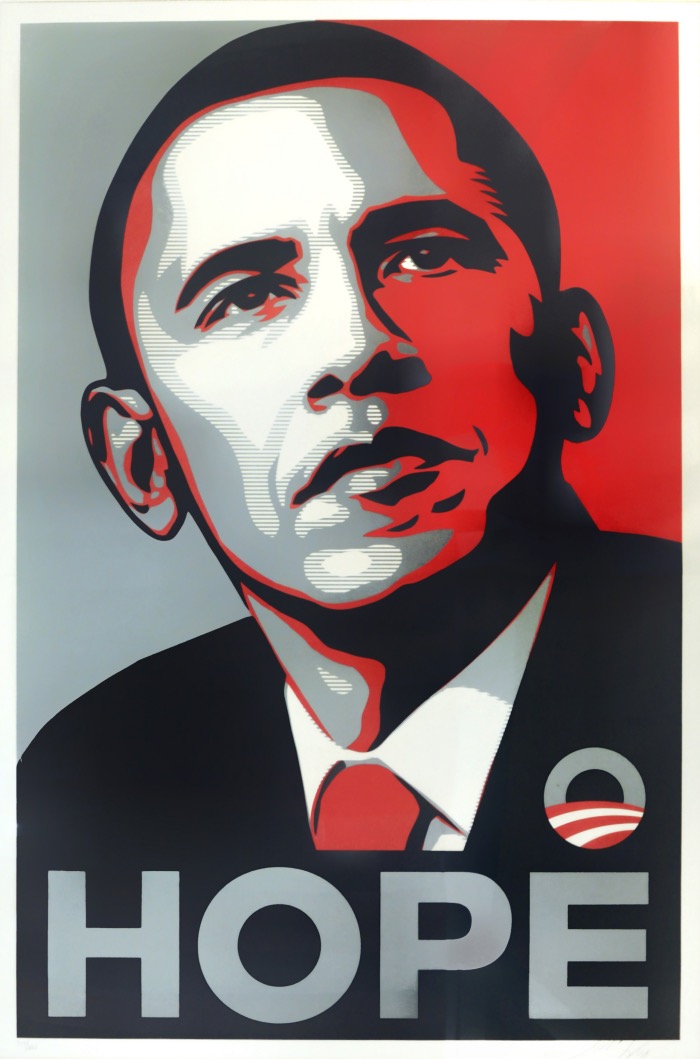 An exhibition that, through 60 works, tells some of the most extreme and transgressive stories of Italian and international public art, through the dialogue between the mysterious English artist and the most influential Italian artists of the moment.