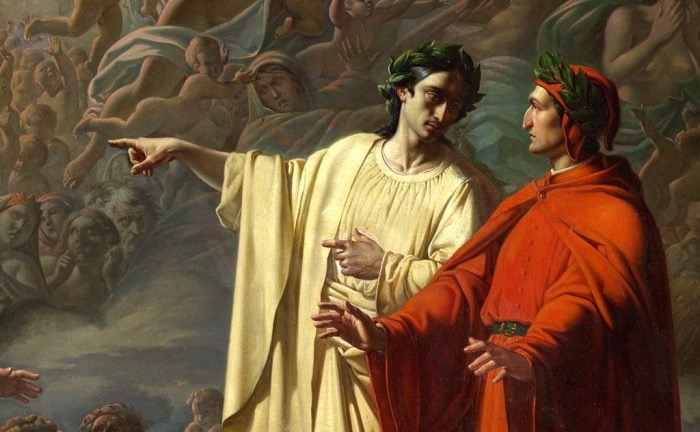 DANTE AT THE ROYAL PALACE: AN EXHIBITION IN NAPLES

At the end of the Dante year, Dante comes to the Royal Palace.
An exhibition in Naples dedicated to the Supreme Poet with paintings by Tommaso De Vivo on the Divine Comedy and other works made in Naples in the nineteenth century.

The exhibition takes place in the spaces of the “Galleria del Genovese”, an ancient passageway between the Palace and the San Carlo Theatre, returned to the public for the occasion.

Dante at the Royal Palace

On the occasion of the seventh centenary of the death of Dante Alighieri, the Royal Palace of Naples celebrates the Supreme Poet with an exhibition centred on three canvases depicting episodes from the Divine Comedy, executed between 1863 and 1865 by the painter Tommaso De Vivo, set up in the spaces of the so-called “Galleria del Genovese”, from 3 December 2021 to 1 March 2022.

In addition to Inferno, the great exhibition on Dante at the Scuderie del Quirinale, there is also this great exhibition entitled “Dante at Palazzo Reale”. Curated by the Palace’s director Mario Epifani and Andrea Mazzucchi, director of the Department of Humanistic Studies at the University of Naples “Federico II”, as well as a member of the National Committee for the celebration of the 700th anniversary of Dante’s death.

The three paintings by De Vivo, made for the King of Italy Vittorio Emanuele II in view of the sixth centenary of the birth of the “Ghibellin fuggiasco” (1865), represent a cycle, now dismembered, to which belong the Inferno, exhibited in the Royal Palace of Naples, the Purgatory, on deposit at the National Library and the Paradise, kept at the Royal Palace of Caserta.

The canvases were recently restored by Miranda Giovarelli and Ugo Varriale, with the collaboration of Francesca Di Martino, in the workshop of the Royal Palace, and then transferred to Forlì, on loan to the Dante exhibition. La visione dell’arte, which was held from April to July in the San Domenico Museums. After their return from the exhibition, the three paintings are now on display in their original location.

De Vivo’s cycle is displayed in comparison with other examples of the fortune of Dante in Neapolitan art in the mid-nineteenth century, from Domenico Morelli’s famous painting of Dante and Virgil in Purgatory (1844) to Antonio Manganaro’s album of lithographs illustrating in a satirical tone The Maritime Exhibition visited by Dante and Virgil (1871). 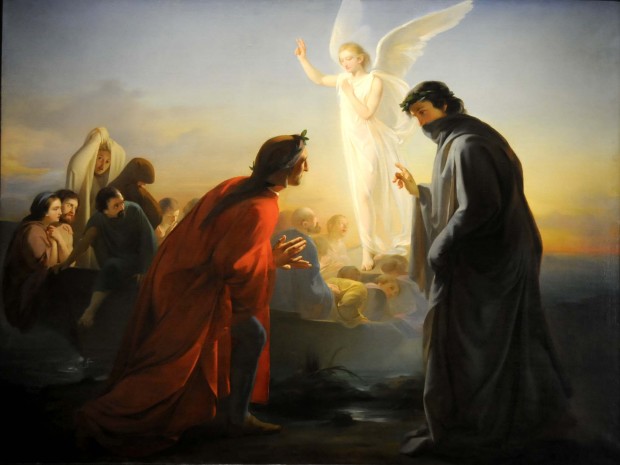 DANTE AT THE ROYAL PALACE: THE EXHIBITION ROUTE IN NAPLES

The exhibition is accessed from the Ambulacro, at the end of the tour of the Appartamento Storico. Through the “Galleria del Genovese”, which was once the link between the Royal Palace and the San Carlo Theatre, the visitor enters the exhibition in the corridor which, on the occasion of the exhibition, is transformed into a forest of moving images thanks to multimedia installations that amplify the effect by reflecting on the nineteenth-century mirrors that decorate it. At the end of the Gallery, images are projected from the theatre’s veil with Apollo presenting Minerva with the most famous poets and artists of all times, including Virgil and Dante with Beatrice.

In the first room there is the painting by Tommaso De Vivo representing Inferno with the Meeting of Dante and Virgil with the great ancient poets in Limbo (canto IV), the first of the three canvases made for Vittorio Emanuele II, which arrived at the Royal Palace at the end of 1863, in view of the sixth centenary of Dante’s death that would be celebrated in 1865 – the first of the united Italy – the year in which the other two paintings were also purchased to complete the cycle.

In this room and the next, a multimedia installation projects illustrations from illuminated manuscripts of the Divine Comedy onto an interactive lectern. The images have been made available by the Department of Humanities of the University of Naples “Federico II”, directed by Andrea Mazzucchi, who has created the Dante Illuminated Project, thanks to which the largest digital archive of illuminated manuscripts of Dante’s Divine Comedy has been set up, freely accessible to specialists, passionate readers and those curious about Dante’s world.

In the second room, Tommaso De Vivo’s Purgatorio dialogues with other works on Dante’s subject produced in Naples around the middle of the 19th century.

In 1844 Domenico Morelli won the competition organised by the Royal Institute of Fine Arts in Naples with a subject taken from the second canto of Purgatory; the painting was bought by the Royal House and placed in the Bourbon guest quarters, now the Prefecture.

Luigi Stanziano’s painting is in line with history painting, between Academicism and Romanticism, in illustrating the legendary episode of the meeting between Dante and Giotto, a year after the celebrations of Dante in 1865.

Like Stanziano’s work, the four porcelain vases with portraits of the greatest Italian poets of the 14th and 16th centuries – Dante Alighieri, Francesco Petrarca, Ludovico Ariosto and Torquato Tasso – belong to the 19th-century collections of the Palazzo Reale.

The album of lithographs published in 1871 by Antonio Manganaro from Apulia illustrates in a satirical tone the first International Maritime Exhibition of Italy, inaugurated in the presence of Umberto and Margherita of Savoy. Imagining himself in the guise of Dante, accompanied by a skeletal Virgil, Manganaro observes the machines, products and inventions on display at the exhibition, amidst caricatures of characters of the time: the fortune of the Supreme Poet lends itself here to an irreverent interpretation of current events.

The exhibition is completed by a painting by Luigi Stanziano depicting Dante in Giotto’s studio and a series of 19th-century vases with portraits of Dante, Petrarch, Ariosto and Tasso from the collections of the Palazzo Reale. The tour is enriched by multimedia projections created by Stefano Gargiulo, artistic director of Kaos Produzioni, which illustrate, through images taken from illuminated manuscripts, Dante’s journey to the afterlife. 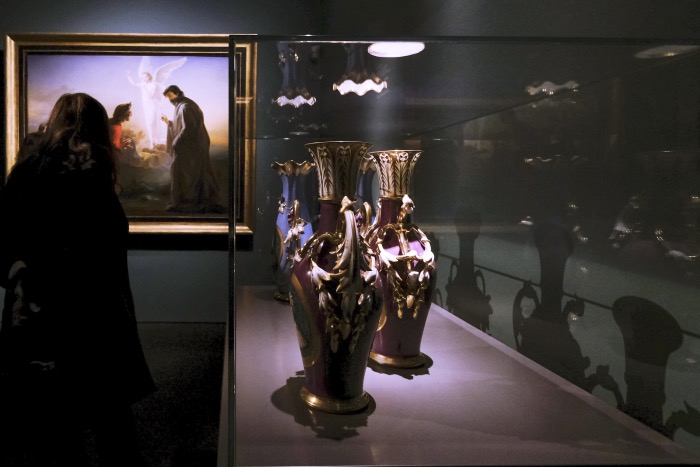 INFORMATION FOR VISITING THE DANTE EXHIBITION AT THE ROYAL PALACE

Opening hours: 9.00-20.00 (last entrance h. 19.00 – closed on Wednesdays).
The visit is included in the ticket for the Historic Apartment of the Royal Palace

The catalogue is printed by Editori Paparo and inaugurates the new series of “Quaderni di Palazzo Reale” (Notebooks of the Royal Palace), published between 1990 and 2014 by the Superintendency and dedicated to the in-depth study of specific themes linked to the history of the Palace and its collections.

The exhibition is organised in collaboration with the Department of Humanities of the University of Naples “Federico II”, the National Library of Naples, the State Archives and the Royal Palace of Caserta.