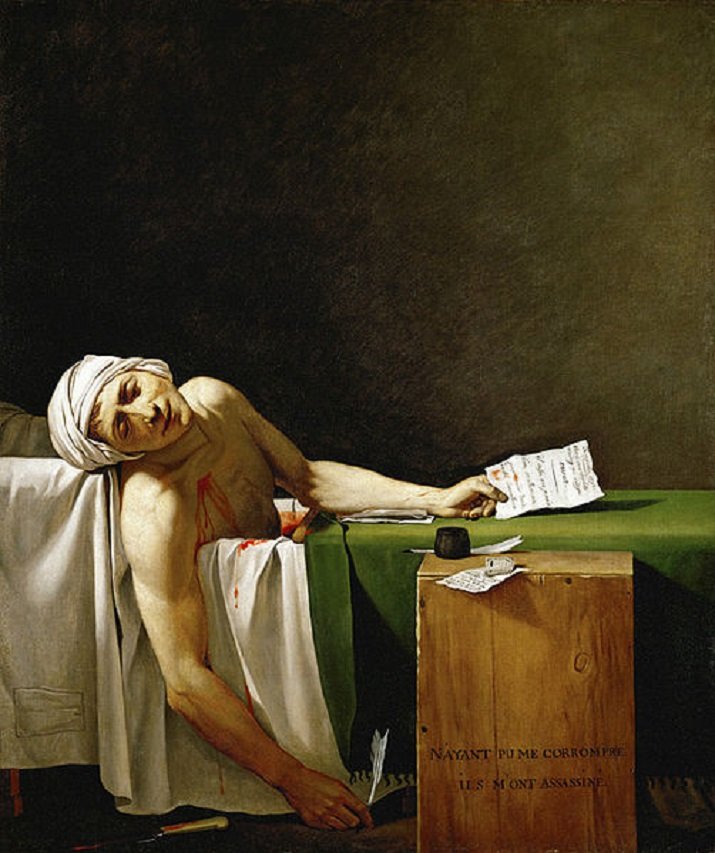 THE DEATH OF MARAT BY DAVID: ANALYSIS AND CURIOUS FACTS

On July 13th 1793 the news of the death of Marat, a protagonist of the French Revolution, shocked France.
Marat was stabbed to death and his murderer, Charlotte Corday, four days after the assassination and after a summary trial, was executed by guillotine.

In this post you’ll discover the history of a masterpiece that depicts one of the most tragic moments in the 18th-century France.

The Death of Marat by David

WHY A PAINTING OF THE DEATH OF MARAT WAS PAINTED

Jacques-Louis David was the official painter of the French Revolution, and in 1792 was also elected as a Deputy of the Convention, and aligned with the Jacobins, who represented the most radical political party during the French Revolution.
So, it was almost automatic for him to be commissioned to execute a painting that would celebrate the Death of Marat, which was considered as a martyrdom.

Marat was a leading figure of the French Revolution.
The Death of Marat was caused by a woman, Charlotte Corday, who believed that he was responsible for the more radical course the Revolution had taken through his role as a journalist and a Jacobin deputy. The woman stabbed Marat while he was immersed in his bathtub and David, one of the most important artists of the 18th century, chose to portray the moment after the murder.

ANALYSIS OF THE DEATH OF MARAT BY DAVID

David did a painting that is the celebration of a martyr of the Revolution.
The room is bare and dark. There’s only Marat lying in the bathtub and few objects of a man who dedicated himself to the good of the French citizens. Marat holds in his hands a pen and a paper his assassin had given him before killing him. On the floor is the murder weapon.

There are a pen and an inkwell on a simple wood box that acts as a desk. On it David painted the inscription: À MARAT, DAVID (TO MARAT, DAVID).

Marat’s pose, with his unmoving arm, draws inspiration from “The Entombment of Christ” by Caravaggio, housed in the Pinacoteca Vaticana, in the Vatican City. 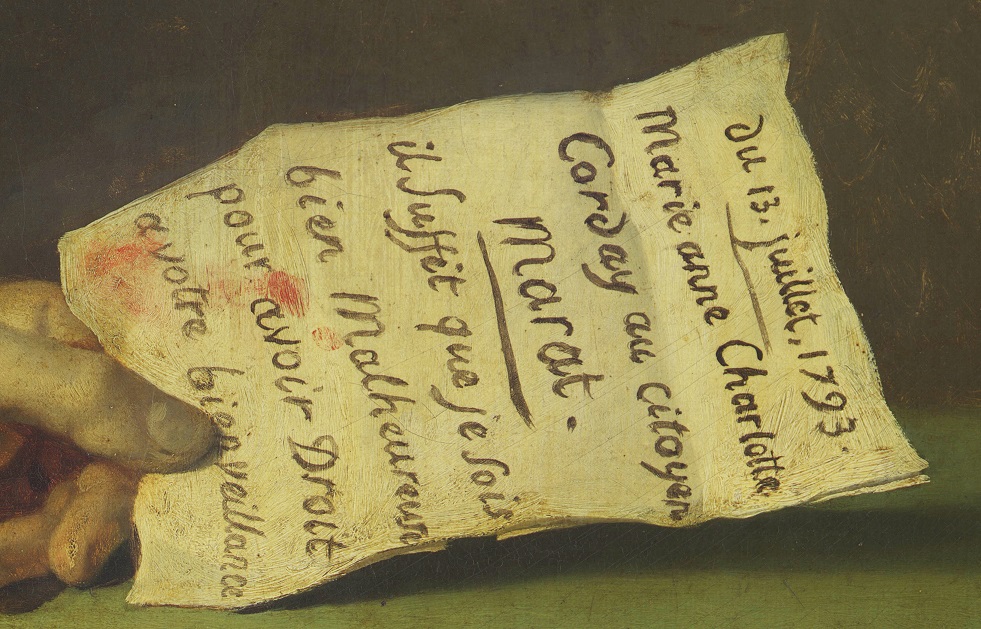 CURIOUS FACTS ABOUT THE DEATH OF MARAT BY DAVID

It may seem odd that the Death of Marat occurred while the hero of the French Revolution was in his bathtub. However, it was not rare.
Marat suffered from a skin disease that obliged him to have long and everyday baths, during which he kept working and meeting any kind of personalities.

There are three versions of this painting.
The first one hangs in the Royal Museums of Fine Arts of Belgium in Brussels, the second is housed in Reims and the third one is part of the  Louvre works.

David was a close friend of Marat and supported politically him on different occasions, especially when they had to vote for the death of the King of France Louis XVI.