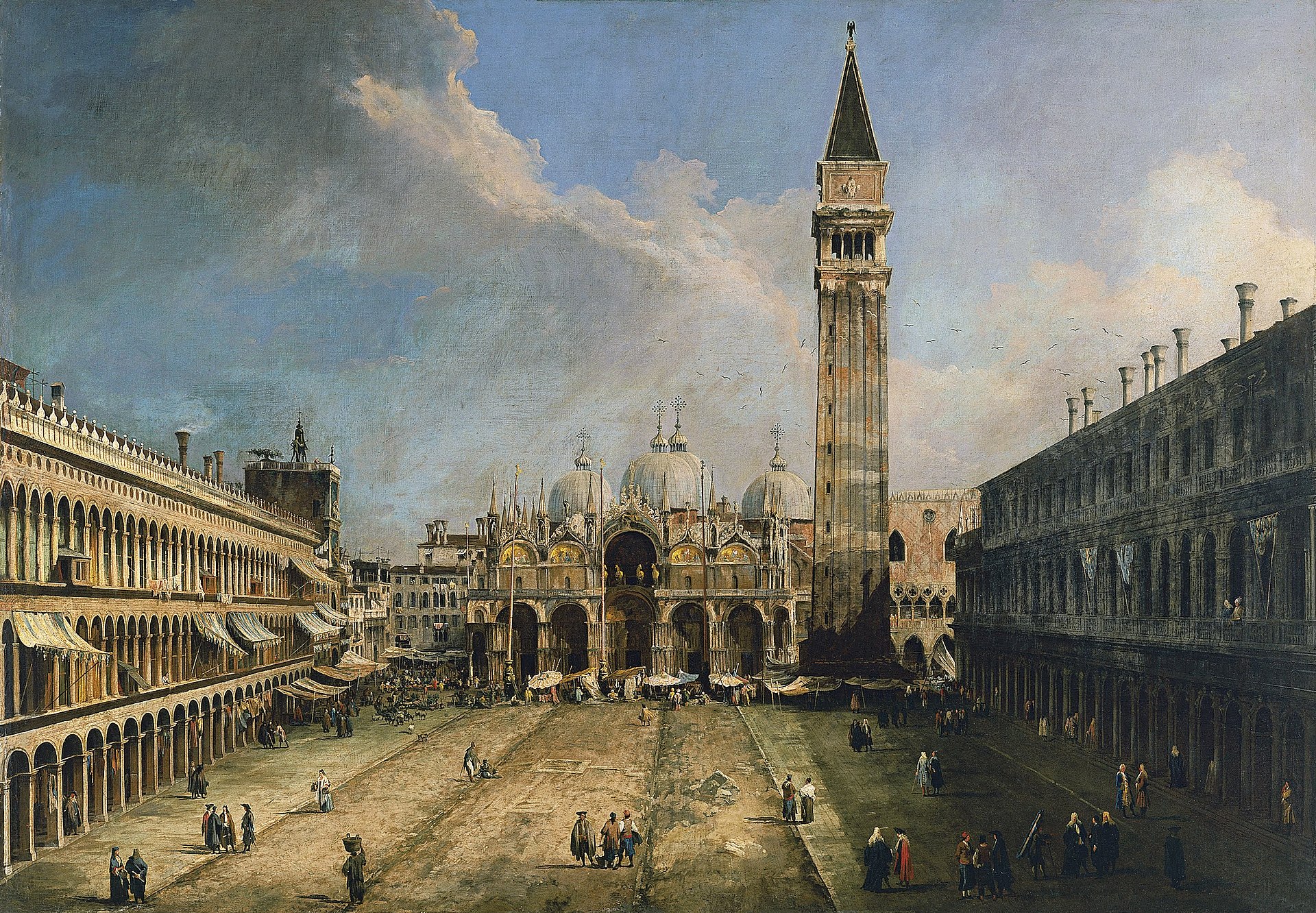 Canaletto’s first steps as a painter of vedute can be traced back to a stay in Rome between 1719 and 1720 when, following his father Bernando Canal, a Venetian theatre set designer, he probably met the vedute artist Gaspare Vanvitelli.

We already know how Canaletto painted, but in a recent essay, Charles Beddington has pointed out that Vanvitelli’s example was certainly the decisive inspiration to embark on a career as a vedutista, pursued by the Venetian artist in a completely original way. 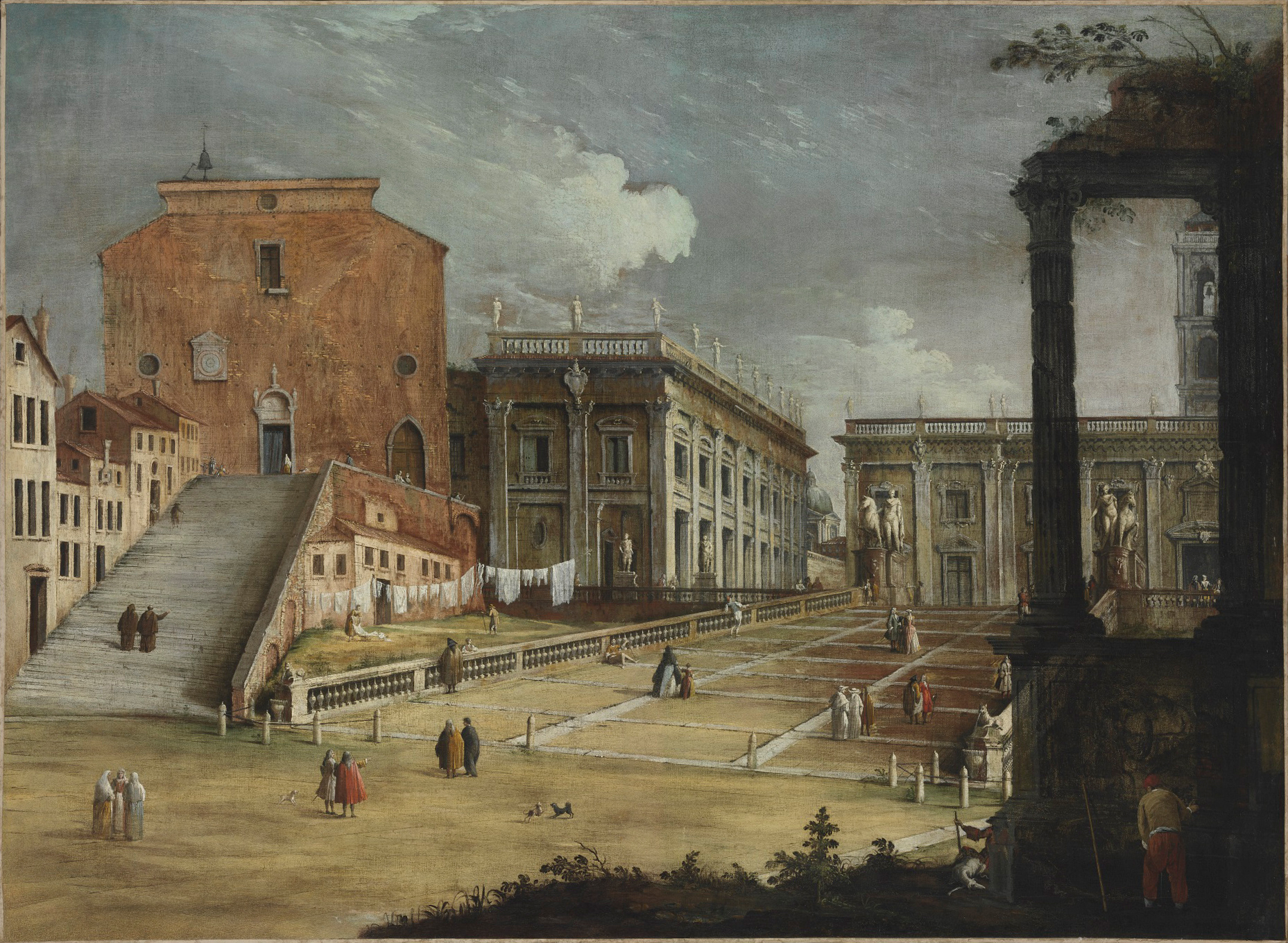 This is what Charles Beddington writes in the essay ‘Roventinizze. Canaletto’ published in the catalogue Canaletto and Venice.

In July 1725, the Veronese painter Alessandro Marchesini (1663-1738) wrote to the Lucchese collector Stefano Conti urging him not to commission any more paintings from Luca Carlevarijs, but to turn to ‘Signor Antonio Canale, who makes in this country universally stodgy everyone who sees his works, which consists on the order of Carlevari but there you see lucer within the sun’.

These words eloquently express how everything in Canaletto’s oeuvre was already seen at this date in terms of attention to light – so much so that Luca Carlevarijs’ work appears linear and flat – and how, at this young age, the artist’s incredibly intuitive response to natural phenomena took the art of veduta to a new level.

The steady development of Canaletto’s art enables his works to be dated accurately, despite the scant support provided by topographical changes and the few works dated with certainty. One of these belongs to the twenty-three views of Rome executed by the painter in 1719-20, early in his career, twenty-two of which are now in the British Museum and one in Darmstadt. Dated ‘AUGUSTO X 1720’, it is his first work with a certain chronological collocation.

The paintings perfectly reflect the story told by Pietro Guarienti, Pierre-Jean Mariette and Antonio Maria Zanetti il Giovane, the three main 18th century biographers of the artist: namely that it was in Rome, while assisting his father in the production of scenic material, that his career as a vedutista began.
In the words of Zanetti:

“In his early years he followed that exercise with his father, useful for loosening the hand and awakening the imagination of youth and forcing it to work with readiness; and he made beautiful drawings for scenarios […]. He then left the theatre, bored by the indiscretion of dramatic poets […] and this was around the year 1719, in which he banned the theatre […].

It would be interesting to believe that these early steps as a vedutista may have been directly inspired by Gaspare Vanvitelli, the Dutch artist who had settled in Rome in the 1770s and is rightly considered the father of the Italian school of 18th century vedutismo. 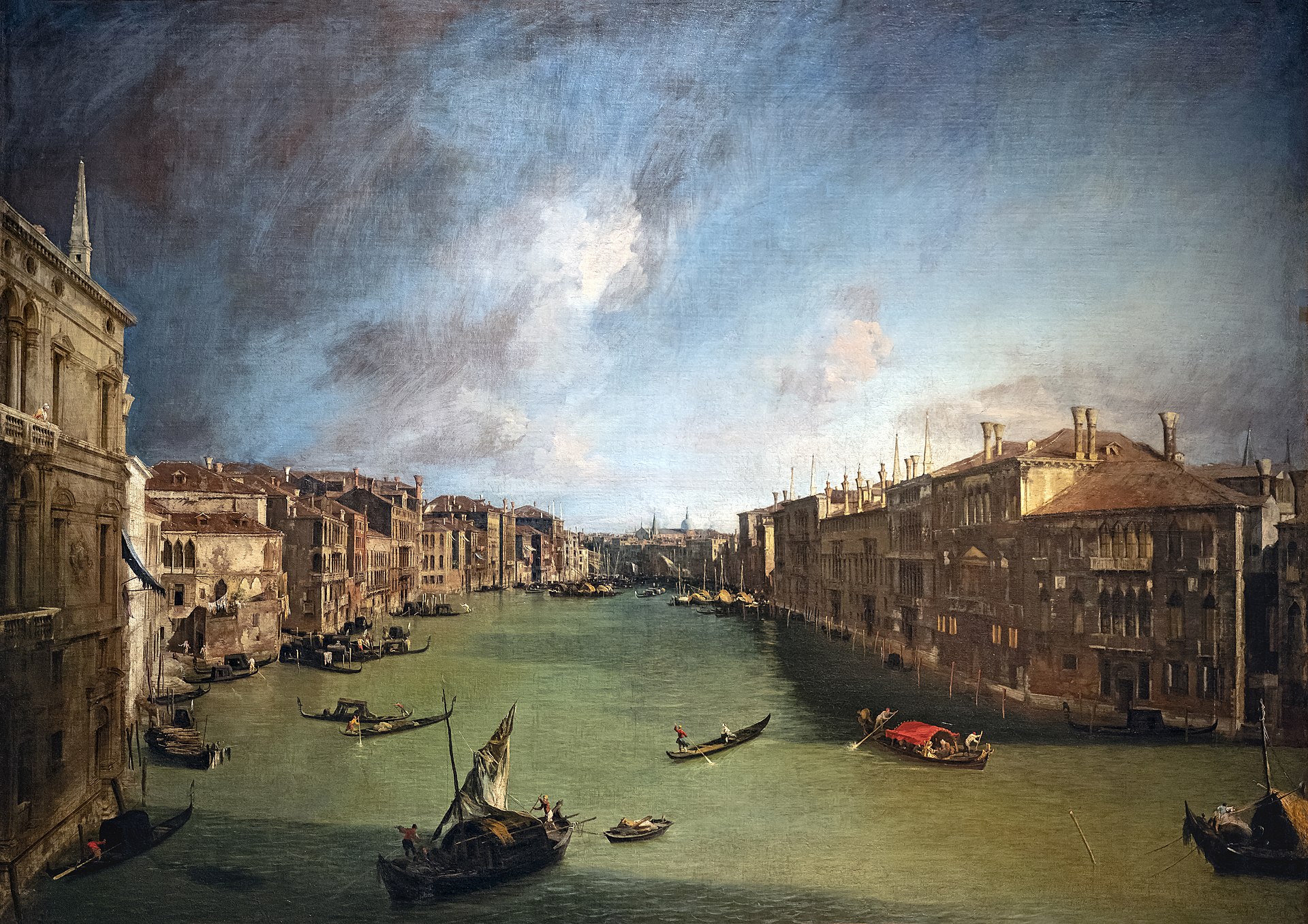 There is evidence that Canaletto was familiar with Vanvitelli’s compositions, suggesting their meeting in Rome around the same time. As there is no evidence that Canaletto’s father, Bernardo Canal (1673-1744), had executed vedute (views) before this date, nor that he gave his son any training beyond painting theatre sets, there is ample room for speculation about other influences.

Vanvitelli’s example in pursuing a career as a vedutista may have been an inspiration, but in other respects Canaletto’s approach is very different from that of the older artist.
Firstly, most of his paintings depict ancient Rome and not modern Rome, which was Vanvitelli’s favourite subject.
The paintings themselves are small in size and very detailed, as if they were intended for printing: twenty-two of them, in fact, were not translated into engravings until much later, around 1780. Canaletto must have been familiar with seventeenth-century print books, such as those by Aloisio Giovannoli (of ancient Rome), Lieven Cruyl, Alessandro Specchi and Giovanni Battista Falda (of ‘modern’ Rome); it is no coincidence that one of his paintings is a direct copy of a 1683 engraving by the latter.

Although clearly youthful works, the paintings already show the young artist’s drawing skills and, above all, his ability to create striking compositions.
Canaletto clearly realised the power of his drawings, which he kept in his studio for decades (the Darmstadt sheet was brought to Dresden by Bellotto in 1747).
A series of graphic exercises formed the compositional basis for a number of paintings executed in later years and in the fifth decade of the century, when they were also used by Bellotto.
The young Piranesi undoubtedly knew them and was influenced by them.

Some of Canaletto’s earliest paintings, executed after his return to Venice in 1720, have the clarity, soft tone and golden colouring of Vanvitelli and his northern disciple and compatriot Hendrik Frans Van Lint (Antwerp 1684-Rome 1763). These include a view of St. Mark’s Square, looking south towards San Giorgio Maggiore, beautifully bathed in afternoon light, whose composition is akin to a work by Vanvitelli.
Canaletto’s canvas is part of a small group from around 1722, united by its small size, striking compositions and tiny figures wrapped in dark clothes and painted in a compact manner, together with St. Mark’s Square, looking west (Vienna, Liechtenstein Collection) and St. Mark’s Square, looking south towards San Giorgio Maggiore, through the Arch of the Clock Tower (Monte Carlo, private collection, formerly in the Neave Collection).
In other respects, however, these latter views have a very different character and a style closer to the series of commissions executed in later years, all for paintings of considerable size.

Charles Beddington continues his essay by pointing out paintings from the early part of Canaletto’s career, emphasising the fact that from the very beginning the artist continually displayed technical dexterity and applied colour vividly and broadly as a good stage painter would.
In the path Canaletto was tracing, however, the figures in the background became more and more detailed and the painter added more and more verisimilitude to each painting.
Canaletto was transforming his style from a painter of scenery to a painter of views! 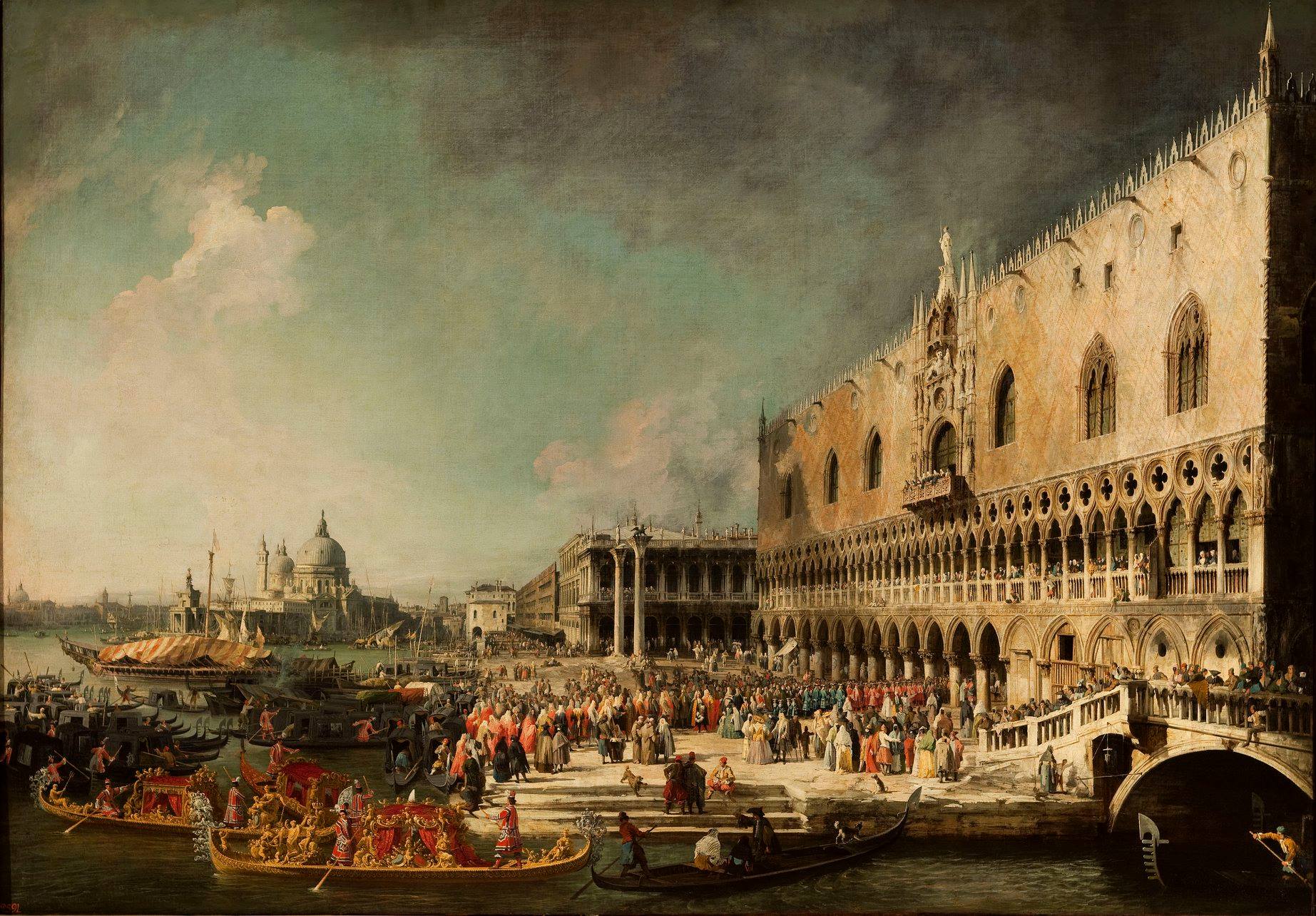 This is how Charles Beddington concludes his essay.

The Solemn Entry into the Doge’s Palace of the French Ambassador Jacques-Vincent Languet, Count of Gergy (cat. V.01) (St. Petersburg, State Hermitage Museum) is the first depiction of a ceremony painted by Canaletto.
It depicts the official reception of the Count of Gergy by Doge Alvise II Mocenigo at the Doge’s Palace on 4 November 1726, although he had actually been residing in the city since 6 December 1723. It could be assumed that Canaletto’s painting was executed shortly after the event.
The composition is basically the one established in 1703 for representations of official receptions of dignitaries at the Doge’s Palace by Luca Carlevarijs, who had actually executed an unusually small example of the same subject for the Count (Musée national du Château de Fontainebleau).

In the Hermitage canvas, Canaletto’s grandeur at this date is fully visible, as if in a competition on equal terms.
While the width of Canaletto’s painting corresponds to Carlevarijs’ preferred format, the former increased the height of the canvas and set back the viewpoint to give a greater feeling of depth.
He transformed the static and, by comparison, flat scene of Carlevarijs by infusing it with life. The atmosphere is always sombre, contrasting with the festive occasion, and the low clouds provide the artist with the opportunity to include the detail of the shadow of one of them on the facade of the Doge’s Palace.
The sun so much admired by Marchesini was only just beginning to come out.