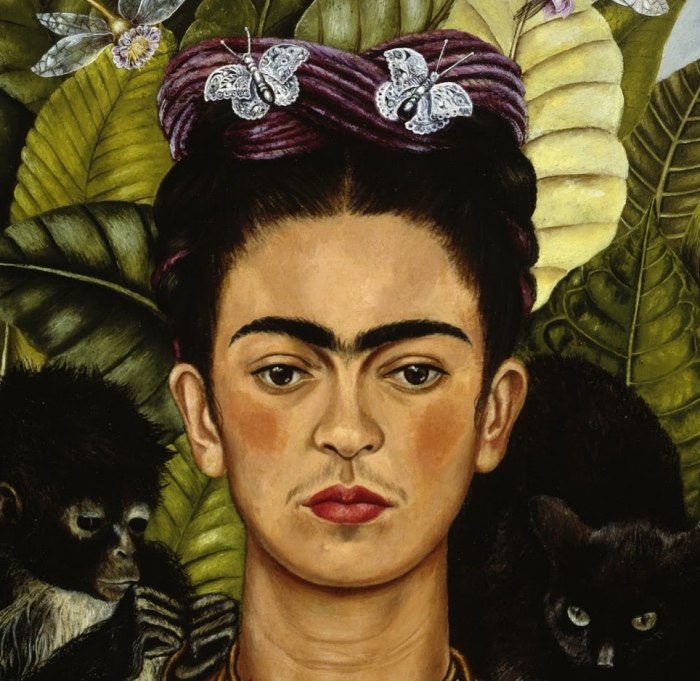 WORKS BY FRIDA KAHLO YOU SHOULD KNOW

Works by Frida Kahlo are a mix of life and pain, love and suffering.
But do you know the most important works painted by this extraordinary artist?
The life Frida is maybe more famous than her masterpieces, but it’s in her paintings that lies the true greatness of this woman who followed a unique and independent artistic path.
In this post I’ll show you works by Frida Kahlo you must know. 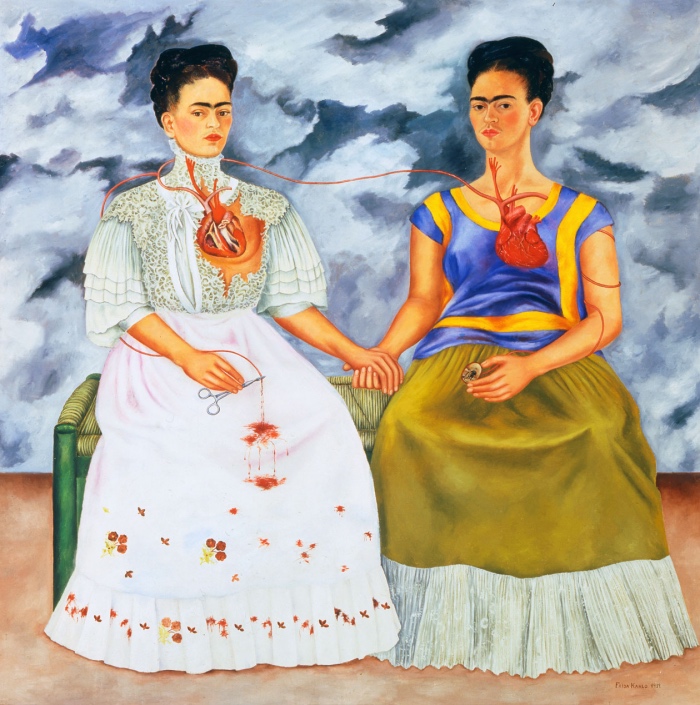 This is the painting, housed at the Museum of Modern Art (Museo de Arte Moderno) in Mexico City, where Frida’s pain seems to exit the canvas, where the artist portrayed herself and her life through a double self-portrait. The painting depicts two versions of Frida: one is wearing a European-style dress, while the other is wearing a Mexican dress.
The theme of the double often appears in her works, and in this case both figures hold hands and their hearts are visible and connected by a blood vessel whose blood spills onto European’s Frida white dress.
The period during which the painting was made wasn’t happy for the artist, because her physical pain was unbearable and her husband Diego Rivera’s adultery worsens the situation. In that year, in 1939, Frida Kahlo and Diego Rivera divorced and, in fact, he is depicted in the portrait on the pendant held by the Mexican Frida on the right.

SELF-PORTRAIT WITH THORN NECKLACE AND HUMMINGBIRD (1940)

The work dates back to 1940, a period particularly happy from a professional point of view and during which Frida painted most of her masterpieces.
Housed at the University of Texas at Austin, the painting is the artist’s self-portrait, who depicts herself wearing a thorn necklace.
The look on her face is calm, in spite of the thorns strangling her throat, causing her to bleed. In addition, Frida is surrounded by animals she depicts also in other paintings to express her feelings.
For example, the hummingbird is the symbol of freedom and life, but in Mexican folklore a dead hummingbird is considered a good luck charm for falling in love. 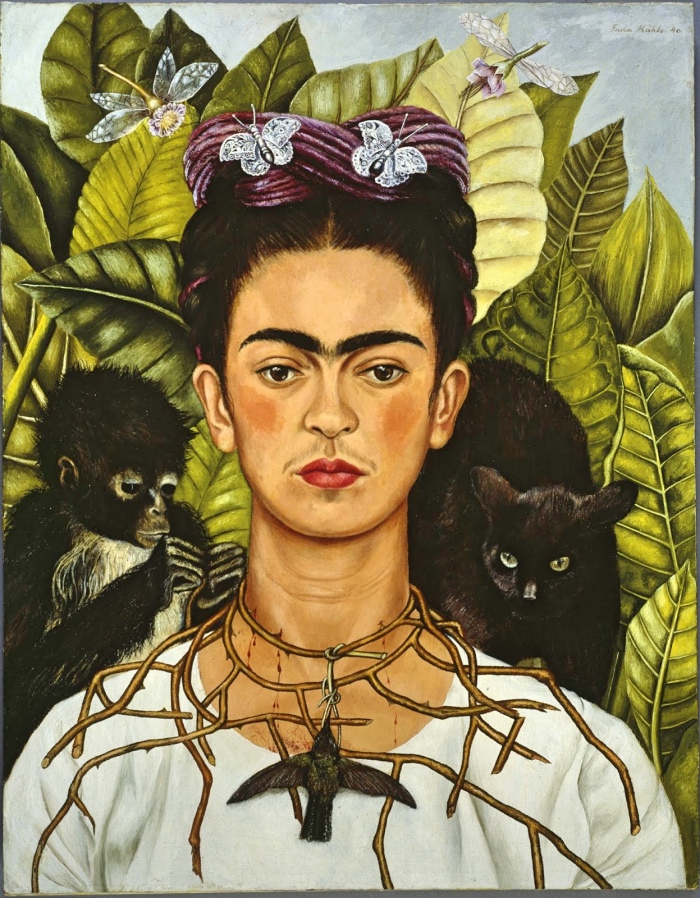 Self-Portrait with Thorn Necklace and Hummingbird (1940)

Among the works by Frida Kahlo this is the one that has always impressed me most.
The image is violent but Frida’s face is calm and resigned. In this canvas the artist portrayed her body trespassed and held together by a metal corset.
Her spinal column was damaged after a bus accident and here it represents her physical and psychological pain.
A series of nails pierce her and through them she expresses what is hard to understand and endure. 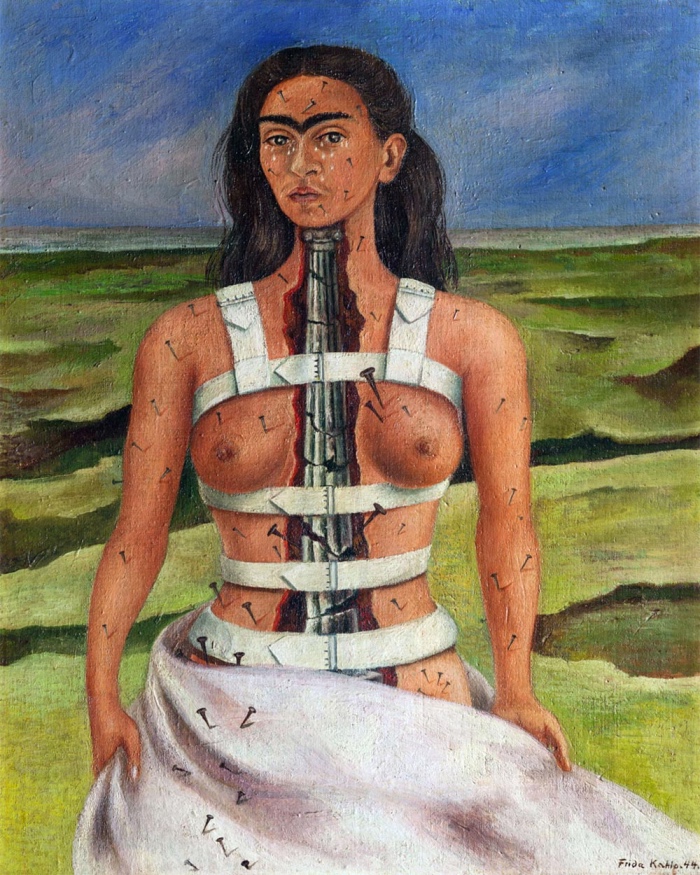 In 1954, at the age of only 47, Frida Kahlo died, and eight days before her death she wrote her signature on the painting: “Viva la Vida”, one of few paintings signed by the artist.
The painting, housed at the Museum Coyoacán in Mexico, portrays a still life with watermelons, with a vibrant red pulp.
It is thought that the painting dates back to 1952, however, eight days before her death she added the sentence “Viva la Vida – Coyoacán 1954 Mexico”.
A sentence that is almost an incitement, a sort of declaration, a hymn to life that Frida lived to the fullest, despite her life was characterized by physical pain.
This painting is a sort of Frida’s spiritual testament, which has to be observed by keeping in mind the last words written in her diary “I hope the exit is joyful and I hope never to return”. 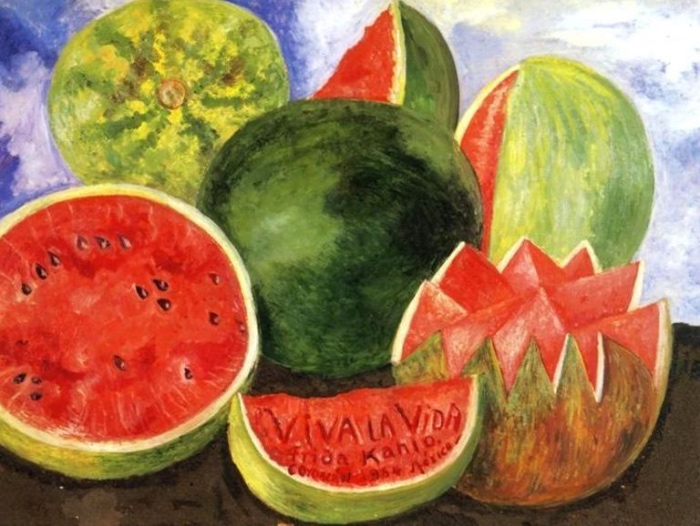