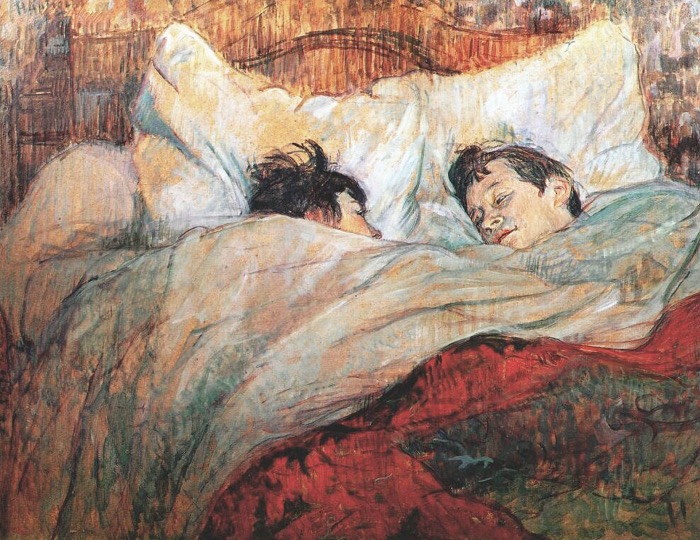 THE BED OF TOULOUSE-LAUTREC: DESCRIPTION, WHERE TO SEE THE WORK AND CURIOSITIES

Toulouse-Lautrec’s Bed is simply one of the earliest depictions of female couples.
Sapphic love had never been of interest to painting and neither did the patrons request this type of representation, unless it was set in a mythological scenario.

Toulouse-Lautrec breaks a taboo and describes something that nobody wanted to talk about yet.

The Bed of Toulouse-Lautrec 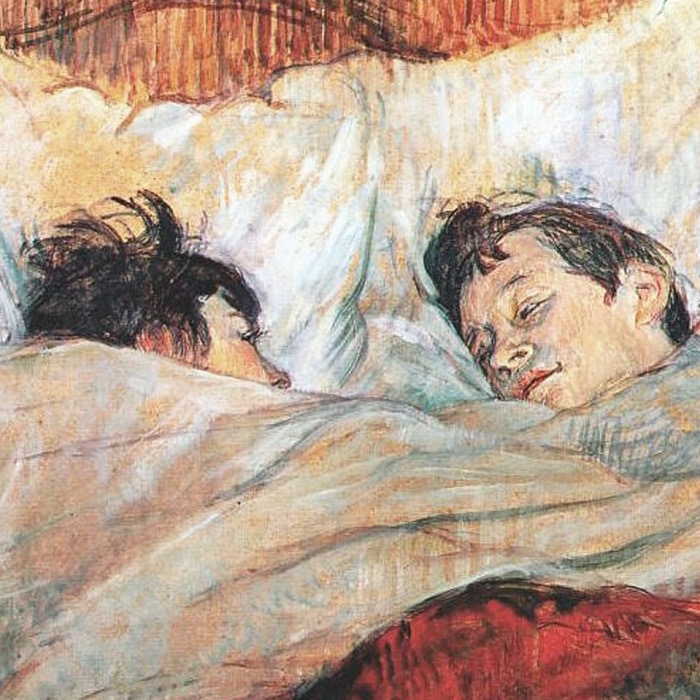 WHY TOULOUSE-LAUTREC PAINTS THE BED

Around 1892, the year he painted The Bed, Toulouse-Lautrec went to live for a while in one of the brothels in Montmartre.
In that environment, he is surrounded by people who live an unconventional life, almost of outcasts and misunderstood, but perhaps truer and above all free of impositions.
The painter immediately feels at ease and begins to draw and paint what he sees.

DESCRIPTION OF THE BED OF TOULOUSE-LAUTREC

Toulouse-Lautrec’s bed still appears unseemly in the eyes of many people.
Many critics accuse the artist of having an excess of voyeurism and of concentrating too much on his idea of love and too little on reality because these girls, in most cases, lived a difficult life and the world around them was not always generous with them.
We must remember, in fact, that they were still prostitutes and, at the moment when the artist portrays them, they are resting after a night’s work.

In reality, Toulouse-Lautrec was in the wake of the works of Courbet and the decadentist reading of the late 19th century, which had already begun to dedicate verses to sapphic love, thanks mainly to Paul Verlaine.

In Toulouse-Lautrec’s The Bed, the two women at first glance look like a normal married couple sleeping in their bed.
Everything seems immersed in great peace and tenderness, so much so that they might even look like two little girls or two sisters resting together.

WHERE THE TOULOUSE-LAUTREC BED IS LOCATED

Toulouse-Lautrec’s bed is located at the Musée d’Orsay and represents one of the most interesting moments in the artist’s career.

The artist does not judge these two women and does not insert anything to make us understand what work they do, we know this because we know Toulouse-Lautrec’s life, but in reality he is observing them gently.

THE BED OF TOULOUSE-LAUTREC: CURIOSITY

Toulouse-Lautrec poses a social question with this painting.
He lived in a society that possessed a patina of hypocrisy and did not allow homosexuality to be spoken of.

The artist despised judgments that marginalised people who were different, as they had also marginalised him due to a congenital malformation.
He was the son of an aristocratic couple and from an early age Lautrec understood that society would not be generous to him. His creativity allowed him to overcome the barriers that his physical condition would not allow him to cross.

This painting is not transgressive but tells the reality as he saw it and as we should observe it today.