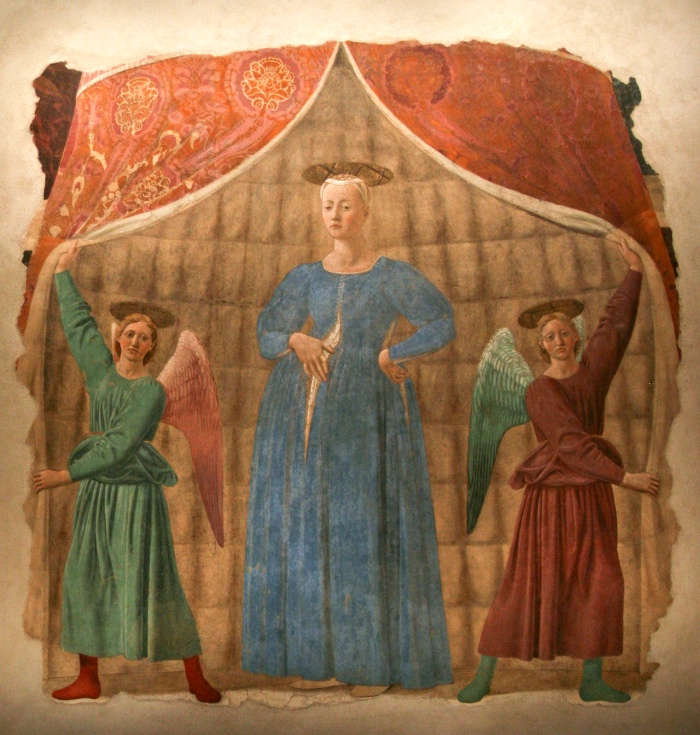 It’s not clear the reason why Piero della Francesca, who was already a very famous artist, painted a fresco with such an uncommon theme in a small village. Probably the fresco was a homage to his mother, Romana di Renzo di Monterchi, who was born in this place.
This painting is characterized by a delicate beauty and an aura of mystery, that is to say features typical of Piero’s works, which arouse more doubts than certainties in the spectators, as I described in the post about the Brera Altarpiece.

Description of Madonna of the parturition

The Madonna del parto (Madonna of parturition) was painted by Piero della Francesca between 1450 and 1455. The Virgin Mary is portrayed pregnant, with a hand against her side to support her prominent belly, and she is flanked by two angels.
The work is delicate and is characterized by perfect proportions typical of Piero’s painting, who built geometrically the space and the volumes of the protagonists of his stories.
On this occasion, however, Piero represents a rare subject in the history of art.
The portrayal of a pregnant Madonna was an unusual theme, but it was depicted sometimes in the early 14th century. But, after the Council of Trent (held between 1545 and 1563) this subject was considered to be a sacrilege, and for that reason most of the paintings depicting that subject were destroyed.
Fortunately, the Madonna del parto by Piero della Francesca survived and we can still admire this touching painting.
The masterpiece is now housed in the Museo della Madonna del Parto, in Monterchi, a museum built to preserve and exhibit it. If you see this painting, you’ll be fascinated by the Virgin, who lowers her gaze down to her belly and to the destiny of the Son she’s expecting, and by the angels, whose gazes, instead, show the miracle that is about to happen.

Piero della Francesca and the cinema

Works by Piero della Francesca influenced several artists, as I described in my post about the review of the exhibition dedicated to Piero della Francesca in Forlì, but also several film directors.
I could mention numerous movies, but my favourite movie is “La prima notte di quiete” (1972) by Zurlini, released in USA as “Indian Summer”. The character played by Alain Delon illustrates the masterpiece of Piero della Francesca to her pupil, declaiming verses taken from the 33rd Canto of the Dante’s Paradiso (Paradise) (Divine Comedy): “Vergine Madre, figlia del tuo figlio/ umile e alta più che creatura” (“Virgin Mother, daughter of thy Son, humble and uplifted more than any creature”).
A passionate homage to the Madonna del parto (Madonna of parturition), which makes the mystery in Piero’s fresco more fascinating.

In 2014 a documentary film came out. It is about the history of the “Madonna del parto” described through memories and words of his historic custodian, who tells ancient and latest events of a timeless masterpiece.
You can buy the DVD on the CG Entertainment website.

4 thoughts on “the Madonna of parturition by Piero della Francesca”