MARIO GATTO AND PUCCINI: THE EMBRACE OF TWO ARTISTS BETWEEN THE CENTURIES

The exhibition of Mario Gatto‘s works at the Arte Spazio Tempo gallery in Campo del Ghetto Nuovo in Venice is a perfect example of how the contemporary visitor approaches art: They approach art with caution, intrigued but also intimidated, they enter on tiptoe, as if “NessunDorma” were a warning and not just a title, they examine each piece with a slightly questioning look aimed at searching for its hidden meanings and they move with a soft step, careful not to miss any detail of a story that the artist has skilfully woven together without pretending to understand it.

This is the preciousness of what we are presented with: each of us can see our own truth in it.

Entering the gallery in the presence of Mario Gatto‘s notes of colour is similar to entering a theatre just before the start of a performance: there is a feeling of quiescence, silence and expectation that only those who are about to attend a performance can experience.

Immediately your eyes run to the painting at the end of the room, “Spazio metafisico” (Metaphysical Space), and the sensation is further amplified: that empty piazza, with its severe geometries outlined in acrylic, cannot but recall the works of De Chirico and leave visitors with the necessary breathing space to move freely through the exhibition. Everyone can in fact see in this absence of protagonists what is most necessary to continue the visit: some see the void created by someone desperately searching for Calaf’s name before dawn, others see it as a simple homage to the master of Metaphysics, while others just want to appreciate the rigorous lines drawn and the ripple of tempera “almost as if it were an intentional imperfection”.

“Spazio metafisico” gives us the time we need to acclimatise ourselves to Mario Gatto‘s paintings and, hooked by this visual freedom, to browse around in the background of the room, where completely different works are waiting for us.

Here Gatto’s models go from De Chirico to Kandinskij, Mirò, maybe Dalì … from a solid geometry that bridles space and transmits that clarity necessary to embrace the artist’s production here he prepares us for explosions of colour, reverberations of light, tonal notes that from simple acrylics are transformed into shapes, silhouettes and figures that invade the tables and make them their own. What are the interpretations here? Some have seen in it the frantic search for the prince’s name, that’s where the figures of the metaphysical square had disappeared, they are all concentrated in these fictitious villages, almost glued to the background as in a collage, while the eyes of “Sguardi divisi”, those of the princess, scrutinise the comings and goings of her servants; others have seen in it a revival of Mirò’s Carnevali and perhaps a glimpse of what Mario Gatto’s production can offer if creativity is not rationalised by matter.

Retracing our steps, our gaze rests on the main work, “Nessundorma”, which gives its name to the entire exhibition, and which, in its melancholy, dilutes the enthusiasm that had instead dominated the previous space, preparing us for the next room, and then on “Fiori d’asfalto”, the work that is probably least understood, in a position almost out of sight with respect to the rest of the exhibition, but which instead has enormous potential for the simple fact of being placed in dialectic with the keyboard of “NessunDorma“, the screws, the corten steel, the mirror used seem almost to emulate, as if to represent a futurist keyboard playing Puccini’s melodies for all visitors to accompany them along the exhibition route. 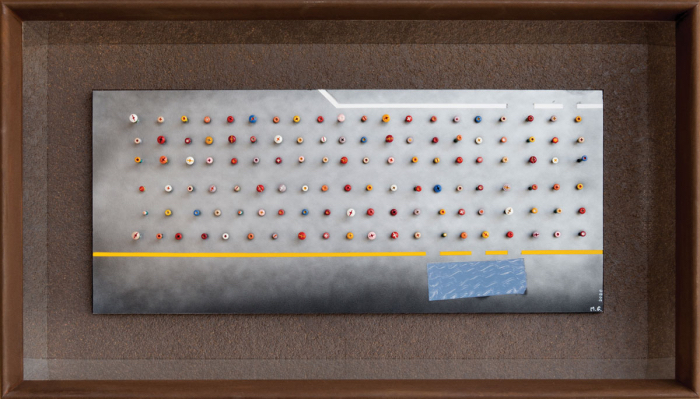 And then, after a last reference to geometry in “Verso il cielo” (Towards the sky), a sterile landscape but extremely consistent with the silhouettes of the environment at the end of the gallery, here we are ready to welcome a new nucleus of pictorial works in a continuous reverberation of colour: among the most popular are “Paesaggio interiore” (Interior landscape) and “Spensieratezza” (Light-heartedness), two works characterised by a dense, viscous hue almost as if they had been painted with a sponge on the surface of the table in a moment of intense joy, a feeling that also transcends the effervescent geometries of the previous paintings and breaks away from the narrative vein of Turandot, preferring instead an intense joie de vivre. As Mario Gatto himself says, these are the works that “I see and feel inside at this moment”.

At the end of the journey we arrive in the centre of warm, earthy, enveloping paintings … the final embrace of the two artists, Mario Gatto and Puccini, who after having made us feel a whirlwind of colourful emotions greet us like this: the rain of light in “Esplosione solare” and the beams of “Incontri” are the perfect link to the initial geometries, this time no longer cold and mechanical, but warm and familiar, a warmth that cools slowly as we turn towards the exit, towards the “Senza titolo”, towards the nebulae of greys, browns and blacks that accompany us towards the exit.

We absorbed sensations and suggestions, until the final affectionate greeting from the artist … Did the exhibition we had sneaked into allow us to meet the artist or ourselves? The music in our hearts accompanies us to the Ghetto in Venice with a whisper: “NessunDorma“.

Exhibition organised by ArteDesignVenezia.org and supported by Synthesis Arredamenti.

2 thoughts on “Mario Gatto and Puccini: the embrace of two artists” 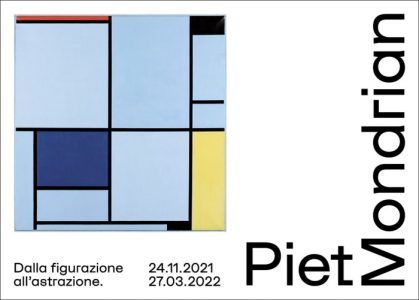