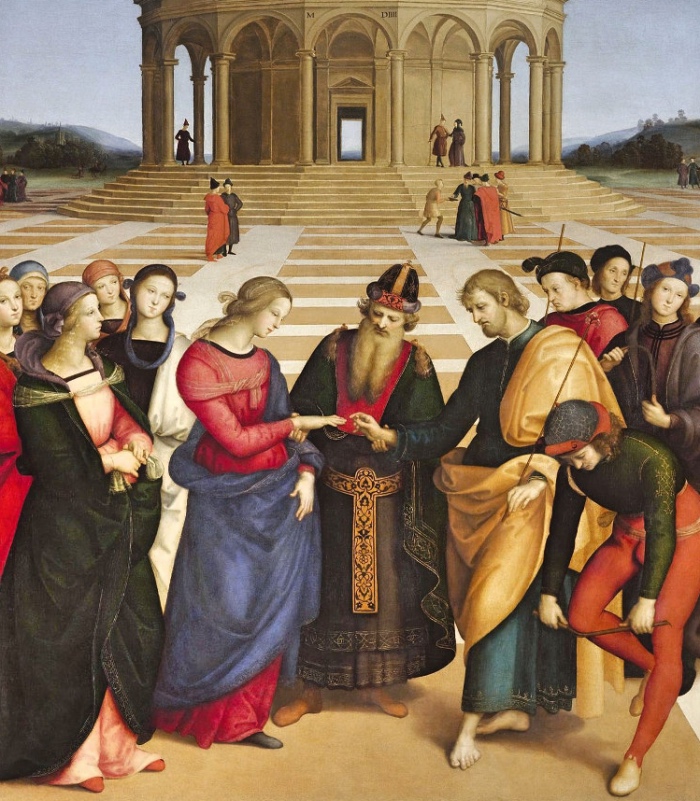 Raphael, The Marriage of the Virgin

THE MARRIAGE OF THE VIRGIN BY RAPHAEL: ANALYSIS AND MEANING

What is the meaning of The Marriage of the Virgin by Raphael and why is it important to know it?
This painting marks the final part of Raphael’s early period and the beginning of his artistic maturity.
Here is what you need to know

Analysis and meaning of The Marriage of the Virgin by Raphael 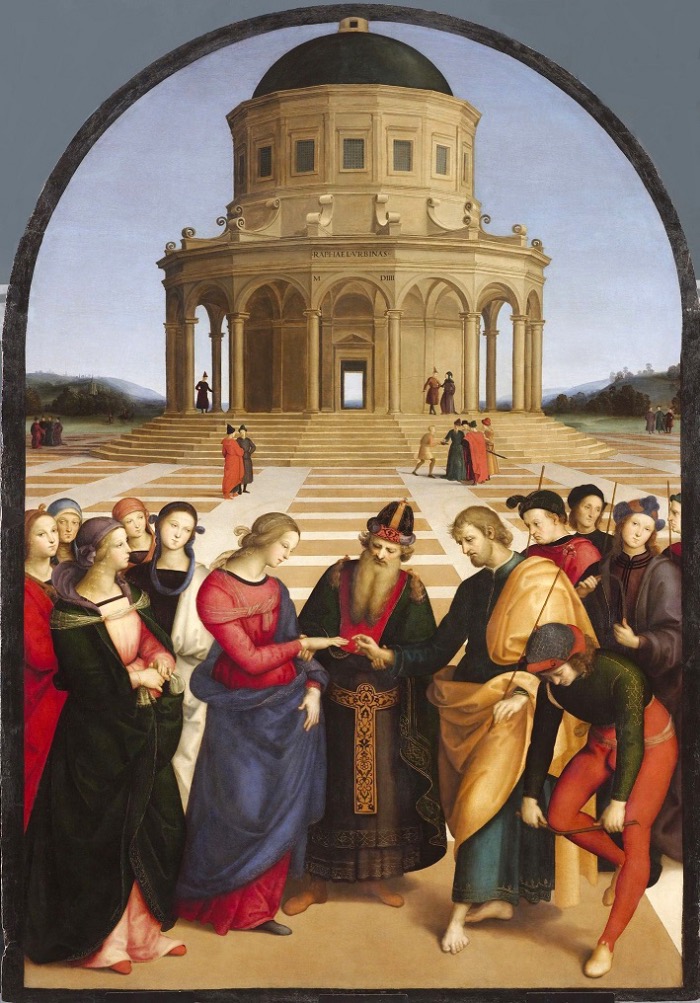 The Marriage of the Virgin by Raphael was painted in 1504 for the Albizzini Chapel, located in the Church of San Francesco al Prato in Città di Castello.
When the artist did the painting he was in Umbria, was 21 years old and had already completed his apprenticeship at Perugino’s workshop and was about to move to Florence.
Here is what to know about this painting.

ANALYSIS OF THE MARRIAGE OF THE VIRGIN BY RAPHAEL

The scene depicted in The Marriage of the Virgin by Raphael is set in a large square overlooked by a large 16-sided round temple, where you can enter through a staircase and the entrance door opens towards the horizon.
In the middle of the portico, above the arch in the front of the temple door, is the artist’s signature “Raphael Urbinas” (Raphael from Urbino) and the date “MDIIII” (1504).
In the foreground is a marriage ceremony and we are spectators of the moment in which the spouses, Saint Joseph and the Virgin Mary, exchange wedding rings in front of the priest.

On the right is a boy breaking a twig with his knee, while other four boys behind Saint Joseph are showing twigs referring to an episode from the Apocryphal Gospels.
The Marriage of the Virgin by Raphael, in fact, portrays an episode not described in one of the four canonical Gospels. A tale focusing on the life of the young Virgin Mary, who spent her adolescence in the Jerusalem Temple, and when she had to choose a husband she couldn’t choose among his suitors. So, the High Priest helped her, by giving each man a twig waiting for a sign: the twig that bloomed was Joseph’s, the oldest suitor.

MEANING OF THE MARRIAGE OF THE VIRGIN BY RAPHAEL

The Marriage of the Virgin marks the final part of Raphael’s early artistic period, who painted this work at the age of 21 and he was inspired by a famous painting by Perugino, almost copying its composition, but producing ingenious solutions that make his interest in rigorous perspective and study of ancient models arouse.

Raphael brought a gust of fresh air to Western painting: the spontaneity of figures, which is a feature also of The Marriage of the Virgin, where the characters have natural movement and are immersed in a bright space.

Raphael’s painting remained in the Albizzini Chapel in the Church of San Francesco al Prato in Città di Castello until 1789. Then, it changed hands several times before settling at the Brera Art Gallery.
In 1789 The Marriage of the Virgin was purchased by General Giuseppe Lechi, who fought against the Papal States. Later, in 1803, the painting was sold to Jacopo Sannazaro who, after his death, left it to the Ospedale Maggiore in Milan, until in 1806 Viceroy Eugenio Beauharnais sold it to the Brera Art Gallery. 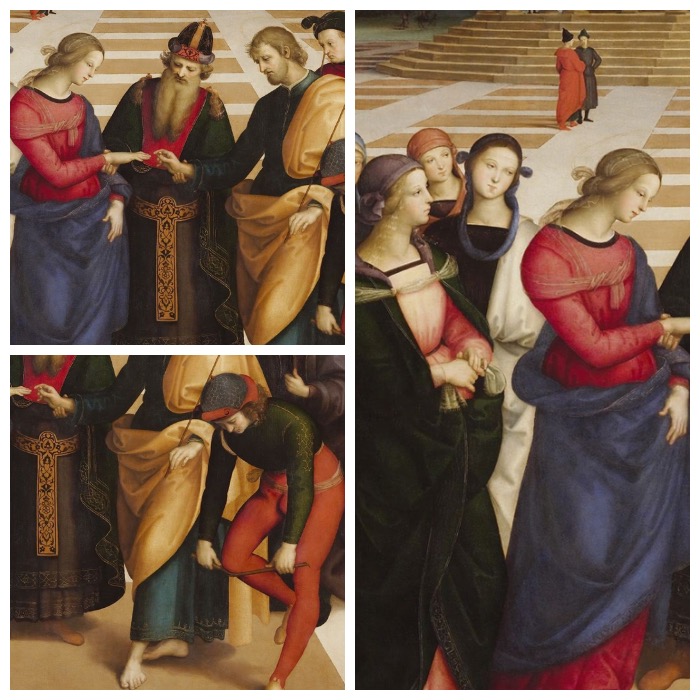 Do you like shopping for art products?
I like it a lot and I don’t miss an opportunity to buy a T-shirt inspired by a work by Michelangelo or a pillow with a detail of a Monet’s masterpiece.
Check out my picks on Amazon.
Maybe you also find that object that you don’t need but that is so beautiful that you can’t not have it 😉