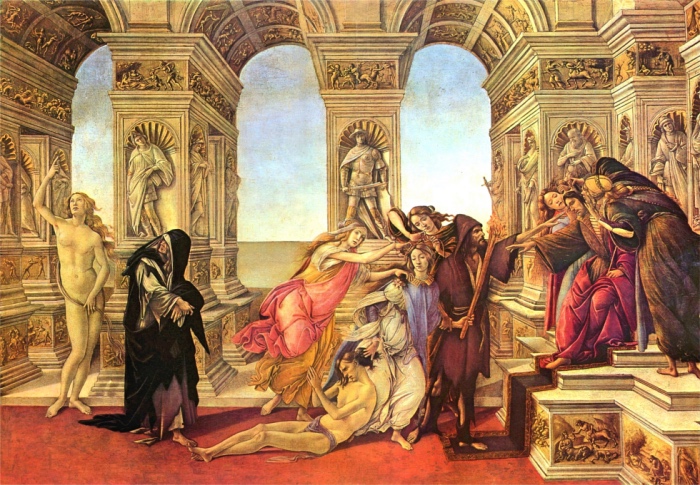 A MASTERPIECE BY BOTTICELLI AT THE UFFIZI GALLERY: THE CALUMNY OF APELLES

There’s a masterpiece by Botticelli at the Uffizi Gallery, next to his famous “Primavera” (“Spring”).
It’s a small painting which always runs the risk of passing unnoticed, but if you know it you can’t help but looking at it, because is full of meanings and is also the key to understanding Botticelli’s artistic journey.

In this post I’ll explain why this masterpiece by Botticelli is so important and what “The Calumny of Apelles” represents.

A masterpiece by Botticelli at the Uffizi Gallery 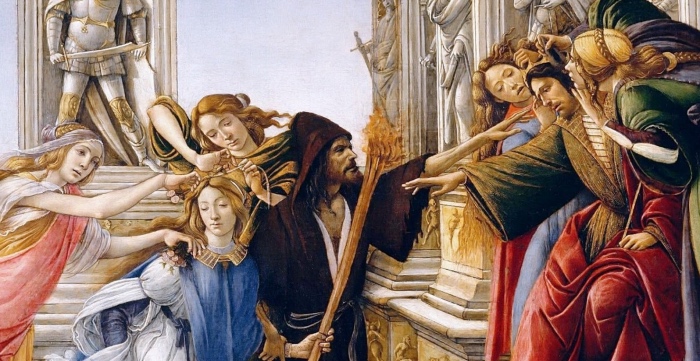 WHEN BOTTICELLI PAINTED THE CALUMNY OF APELLES

Botticelli’s masterpiece “The Calumny of Apelles” was painted around 1496.
Lorenzo il Magnifico (the Magnificent) had died some years earlier, in 1492, and the Dominican friar and preacher Girolamo Savonarola criticized the culture of that time by urging everyone to repent, until he was condemned and burned at the stake in 1498.

The Florentines, and Sandro Botticelli as well, were captivated by Girolamo Savonarola and his passionate sermons against corruption and decadence of the Church.

Botticelli’s masterpiece “The Calumny of Apelles” was painted when the artist suffered a severe existential crisis which would change forever his style and the subjects of his works.

Therefore, “The Calumny of Apelles” is a divide between the first and the second phases of Botticelli’s artistic production.

READ ALSO – The Birth of Venus and Botticelli’s muse.

DESCRIPTION OF THE CALUMNY OF APELLES

To create his painting Botticelli drew inspiration from an ancient lost painting by the great Greek painter Apelles (4th century BC), described by the Greek writer Lucian of Samostata.
Lucian claims that the painting was inspired by an event happened to the artist himself, who was wrongly accused.

The works has to be read from right to left.
On the throne sits King Midas with donkey ears and in the guise of a judge, listening to the suggestions of “Ignorance” and “Suspicion” that are at his back.
In front of King Midas there’s “Rancour” (Envy), a hooded man in black grabbing “Calumny” (Slander) by the arm, who is a beautiful woman whose hair is being arranged by “Conspiracy” and “Fraud”.
It’s “Calumny” (Slander) to drag by the hair the accused man, while holding in the other hand a flaming torch, symbol of false knowledge.

In the scene there are also “Repentance” (the old lady on the left) and “Truth” nude and looking at the sky while pointing with her finger upwards to Heaven, which is the only real justice. 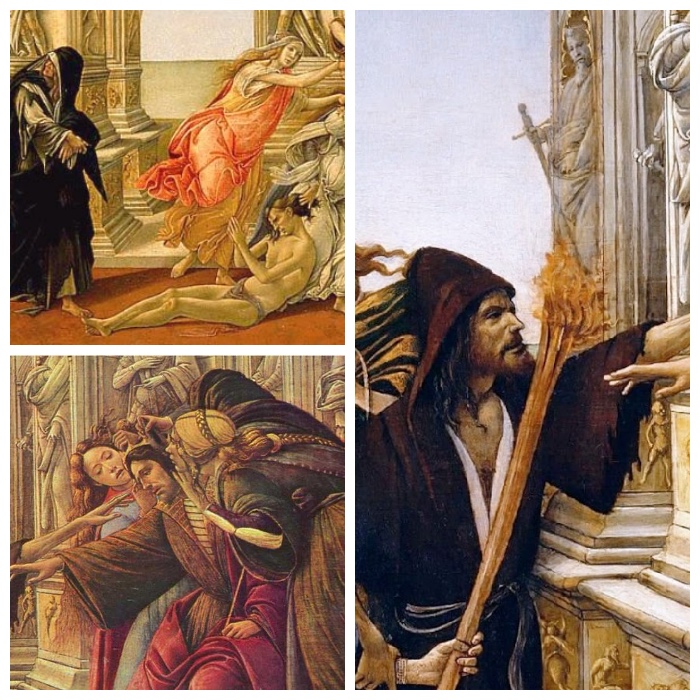 3 thoughts on “A masterpiece by Botticelli at the Uffizi Gallery: The Calumny of Apelles”