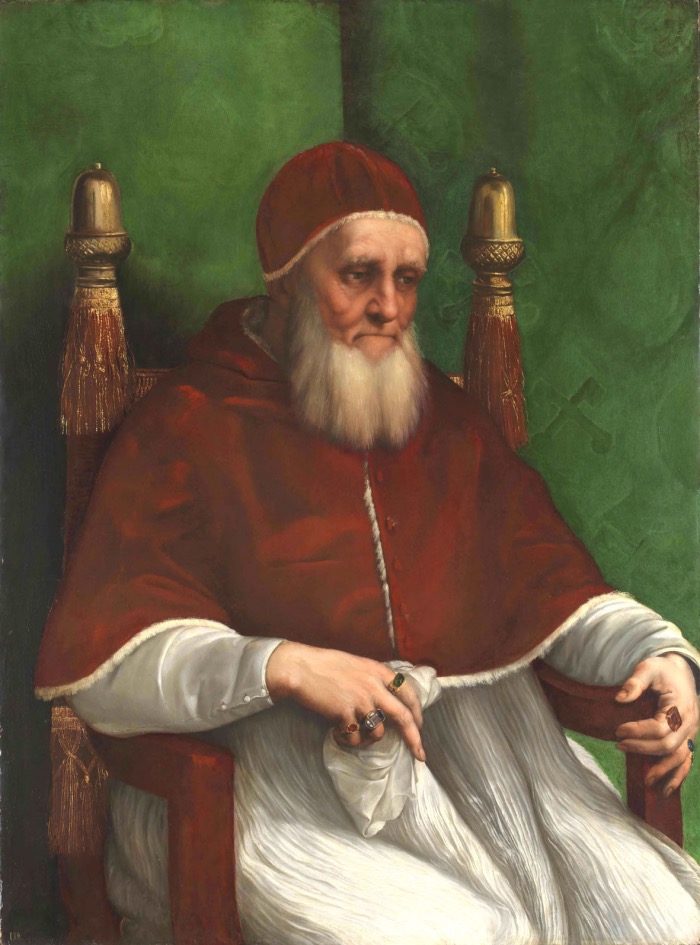 THE PORTRAIT OF POPE JULIUS II BY RAFFAELLO: ANALYSIS AND CURIOSITIES

There are two versions of Raphael’s portrait of Julius II.
The first is currently in London and was painted in 1511, while the second is in Italy, dated around 1512 and is kept in the Uffizi Gallery in Florence.

In this post, I describe the work that is in London. Raphael’s portrait of Julius II was commissioned by the pope himself to be placed in the Church of Santa Maria del Popolo in Rome.
We know from historical records that the portrait was certainly displayed in the church on solemn occasions.

The work is now in the National Gallery in London and is one of the most intense portraits we have of Julius II, an arts-loving pope and patron of many great artists.

DESCRIPTION AND ANALYSIS OF THE PORTRAIT OF JULIUS II BY RAFFAELLO

This exciting masterpiece, painted by Raphael between 1511-1512, depicts Pope Julius II in a new way.
Raphael breaks with all iconographic tradition and places the pope at the centre of the canvas not as an aseptic hieratic figure, but as a real man.
Julius II appears with the insignia of his mission, as a spiritual leader but also as a temporal leader. In short, he is a man who acts in politics as well as being a guide for the faithful.

About this portrait, Vasari wrote that it was ‘so vivid and true, that it made one fear […] to see him, as if he were the living one’.

CURIOSITIES ABOUT THE PORTRAIT OF JULIUS II BY RAFFAELLO

Raphael’s portrait of Julius II can be dated to the period before December 1511 when the pope had his beard shaved following a vow for the unhappy outcome of the war against Louis XII of France.
The pontiff’s defeat against the French also led Julius II to change the iconographic design for the last wall of the Stanza della Segnatura and the Stanza di Eliodoro, entrusted to Raphael himself.

Raphael is therefore allowed to paint a portrait of Julius II taking into account the character’s psychology and giving the pope a more intimate and less official image.
This is why in the portrait, now preserved in London, the pope looks tired and pensive. 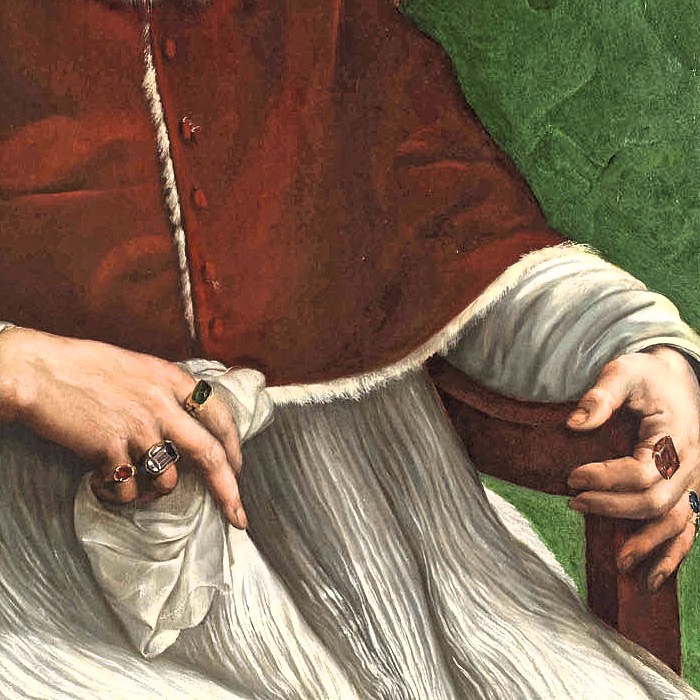 WHERE THE PORTRAIT OF JULIUS II BY RAFFAELLO IS NOW KEPT

We know that until 1591 the portrait of Julius II was in the Church of Santa Maria del Popolo. After that date the painting was taken by Cardinal Sfrondati who sold it to Cardinal Scipione Borghese in 1608.
It was between the end of the 18th century and the beginning of the 19th century that the painting arrived in London where the National Gallery bought it in 1824 and still keeps it.