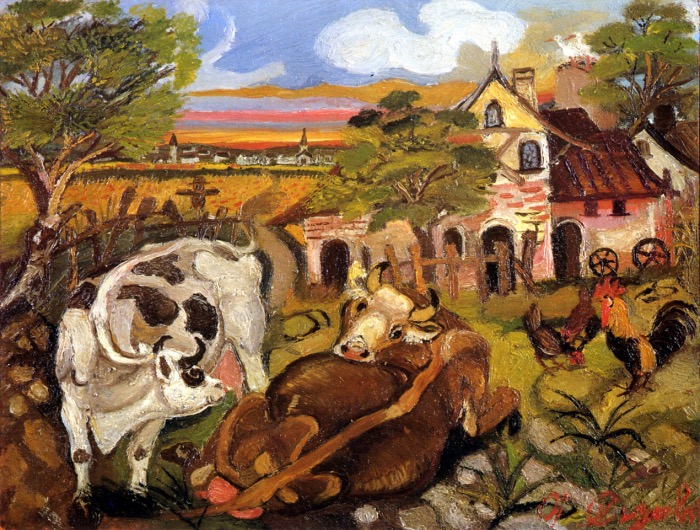 Antonio Ligabue’s works are the tool of a man who wanted to communicate his pain and suffering to the world.
Judgments about his art have often been misleading and his works have been wrongly described as naïve or the work of an artist marked by madness.

In reality, he is a unique case in the art of the second half of the 20th century, but he is able to tell each of us something thanks to that cry in the silence of nature that seems to come out of his paintings. A cry that resonates in the deafness of the people around him.

The works of Antonio Ligabue

Antonio Ligabue’s sad story began on 18 December 1899 in Zurich and ended on 27 May 1965 in Gualtieri, where he had landed on 9 August 1919, expelled from Switzerland.
His childhood and adolescence were marked by marginalisation (when he was only nine months old, his mother entrusted him to another family) and impatience with the world around him.
At school, he was considered a difficult boy but had already revealed his passion and talent for drawing.

In Gualtieri, his life did not change.
Antonio Ligabue had to face very hard times in the early years, when he had to work as a scariolante on the banks of the Po to make a living.

He began painting in the late 1920s, appreciated by very few admirers of his works, including Marino Mazzacurati.

The two main themes of Antonio Ligabue’s artistic career are animals, wild and domestic, and self portraits.
Then there are the scenes of rural life and landscapes of the Po Valley, in which, like a stream of consciousness, depictions of castles, churches, spires and houses with flags flying in the wind on the steep roofs of his native Switzerland burst forth, the memory of his lost homeland, where he was born and where he had lived until his expulsion in 1919.

Ligabue depicts both domestic animals, caught in a rural atmosphere, and wild animals, tigers, lions, leopards, gorillas, foxes, eagles, whose anatomy he knew very well, often depicted as they are about to pounce on their prey.

The self-portraits constitute a strand of the highest and most bitter poetry in Ligabue’s art.
In them, the painter places himself in the foreground, almost occupying all the space of the scene, against a landscape that almost always seems, with very few exceptions, to be a totally irrelevant detail.
His self-portraits reveal a human condition of anguish, desolation and bewilderment. His face expresses pain, fatigue and dismay, and every relationship with the world seems to have been severed forever, as if the artist could only recount, for one last time, the tragedy of a face and a gaze that does not care to see the things around it, but asks, at least for once, to be looked at.

Some of the paintings are considered to be among his masterpieces: 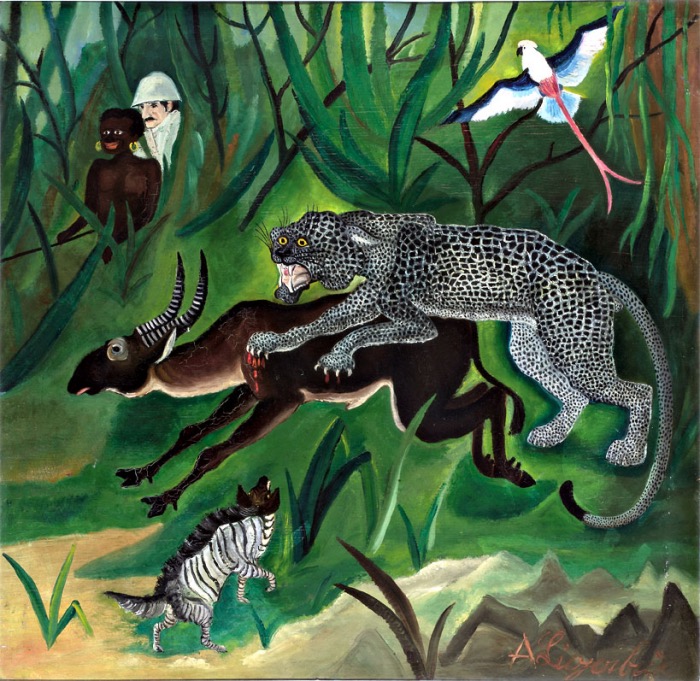 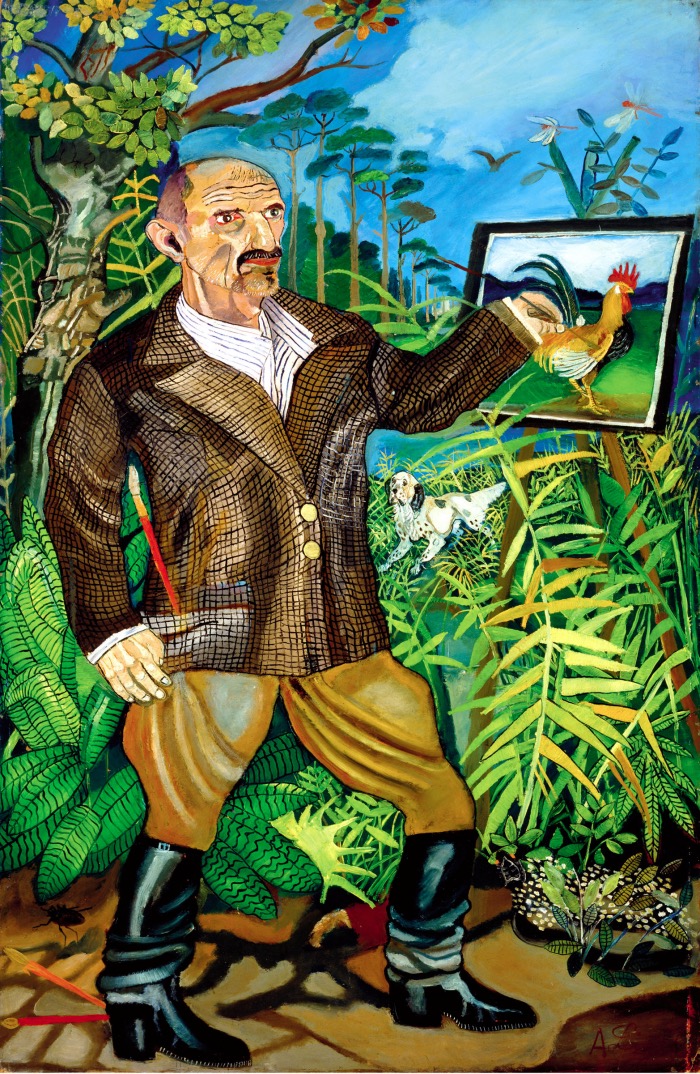 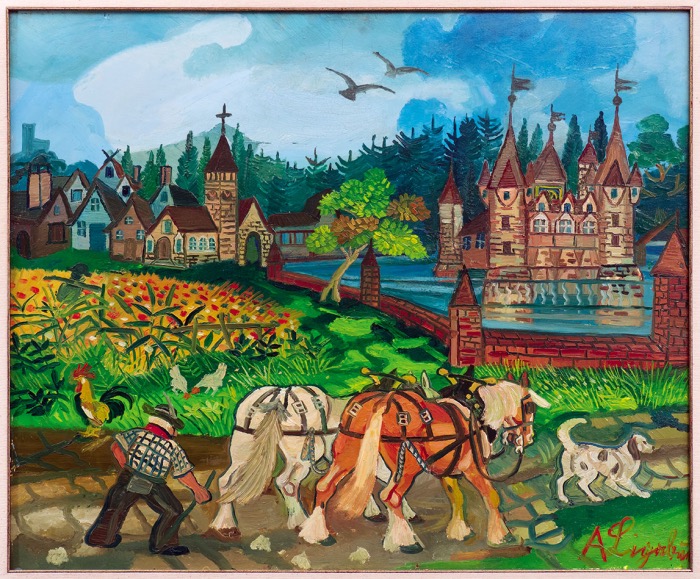 THE LIFE OF ANTONIO LIGABUE AND SUCCESS AS AN ARTIST

Adopted and then denounced by his adoptive mother for his often aggressive behaviour, Antonio was in and out of nursing homes and asylums until 1948, the year in which critics and gallery owners began to take an interest in him and his intense, colourful, expressionistic and at the same time naive works.

In 1955, Antonio Ligabue’s works were finally exhibited for the first time in Gonzaga, on the occasion of the Millennial Fair.
In 1961 an exhibition in Rome, at the Galleria La Barcaccia, marked his consecration and the birth of the ‘Ligabue case’. His artistic activity was intense, often misunderstood and even mocked, but it aroused the admiration and interest of collectors, critics and art historians.

The most recent anthological exhibitions include the one held in 2005 at Palazzo Magnani in Reggio Emilia and Palazzo Bentivoglio in Gualtieri, with almost two hundred works, on the occasion of the fortieth anniversary of Antonio Ligabue’s death, and the subsequent exhibition, also in Gualtieri, in 2015, fifty years after his death.

From 11 February to 1 May 2022, the works of Antonio Ligabue are the protagonists of an exhibition at the Reggia Reale in Monza thanks to the exhibition entitled “Antonio Ligabue. L’uomo, l’artista”, curated by Sandro Parmiggiani, produced and organised by ViDi in collaboration with the Municipality of Monza and the Consorzio Villa Reale e Parco di Monza.

The exhibition celebrates the genius of the artist who was born in Zurich in 1899 and died in Gualtieri (Reggio Emilia) in 1965.
Ninety works, including paintings, sculptures, drawings and engravings, trace his human and creative life, from the 1920s until 1962, when a paresis put an end to his activity.

ANTONIO LIGABUE. THE MAN, THE ARTIST
Monza, Orangerie of the Villa Reale (viale Brianza 1)
11 February – 1 May 2022