BALANCE THROUGH THE WORKS OF ANTONIO SIGNORINI

Dynamic poses, jumping, running, galloping, dancing. Antonio Signorini’s works have no eyes, the gaze becomes a search for something that cannot be seen because the artist provokes the viewer and stimulates his contribution.

Antonio Signorini is an Italian artist, born in Tuscany in 1971.
Immersed in the history and art of the Renaissance since his childhood, he shared his father’s passion for art and, together with him, visited museums, cities, palaces, observed and studied monumental and archaeological works in Italy and Europe, giving rise to a process of research and study of art history and primitive art that accompanied him throughout his life.

The works of Antonio Signorini 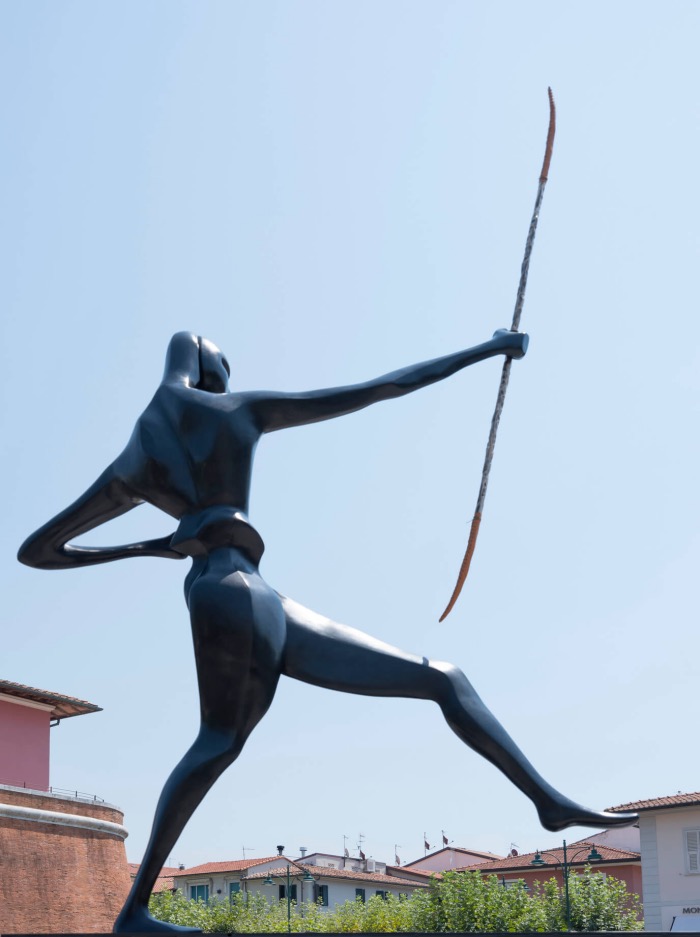 Constantly moving between Italy, London and Dubai, Signorini in his travels is always looking for something to ignite his work, governed by the awareness that iconographic roots are common to multiple cultures and do not belong to specific territories.
Antonio Signorini’s works originate from a question about what creativity is and how, starting from an idea, the artistic journey begins to materialise in the drawing and then, in the sculpture, emerges from it and begins to occupy a concrete space: this is how the creative idea takes shape and substance while remaining, at the same time, intangible and elusive.

Antonio Signorini’s works question the meaning of the work of art, its beauty, its being beyond time.
From 2001 to 2003, his desire to perfect his knowledge in various artistic techniques saw him deepen his knowledge in sculpture by working with bronze and other materials. He also continued his research into classical and Renaissance art, as well as the study of ancient civilisations of the world.

Antonio Signorini’s works tell us of an impossible balance, of materials moulded in such a way that they appear ethereal, weightless and indifferent to the force of gravity.
The lines are essential, clean and the forms are in perfect balance.

In 2004, Antonio Signorini moved to London where, for 15 years, he worked in his studio in Battersea just behind Battersea Power station, a place where industrial archaeology is integrated with typical London terraced houses, always leaving space for large green areas.
This makes him even more interested in the role of art and its integration into the urban fabric, and stimulates him in the quest for the creation of an artistic landscape integrated into the territory.

In London, Antonio Signorini’s research finds fertile ground. He succeeds in working on projects fusing art and architecture, re-establishing the role of the artist as a creator of spaces where art does not remain isolated but merges and incorporates itself into the structure and narrative of the city and the house.  It was during this period that he developed the concept of ‘structuralart’, a working method that combines architectural design and the artistic design of the building and the city to make art an integral part of the urban fabric in which he works.

Today, Antonio Signorini lives in Dubai where many of his works are exhibited in public areas and where the study between the coexistence of ancient civilisations and ultra-modern architectural structures has become a source of inspiration and comparison.
Working in one of the oldest civilisations surrounded by the most futuristic skyscrapers is a chance for the artist to create a trait d’union between the past, the present and the future.

To learn more about his research, his works and his work, I recommend visiting his official website: https://www.antoniosignorini.com

THE WORKS OF ANTONIO SIGNORINI ON SHOW

From 22 July to 30 September, Signorini’s monumental Warriors, Dancers, and Flying Horses will be installed in the city’s most evocative spaces, among the streets and squares of the historic centre and the seafront, for an open-air exhibition organised by the Municipality of Forte dei Marmi and Oblong Contemporary Art Gallery, in collaboration with Villa Bertelli and curated by Luca Beatrice.
To complete the exhibition, four important sculptures together with a significant body of works on canvas will be displayed in the spaces of Oblong Contemporary Art Gallery in the central Via Carducci.

Created especially for the Forte dei Marmi exhibition, these are the five previously unseen monumental works of bronze casting, of which ARCTURUS, the monumental 10-metre flying horse, is one. Their emblematic names refer to stories from Greek mythology and the constellations.