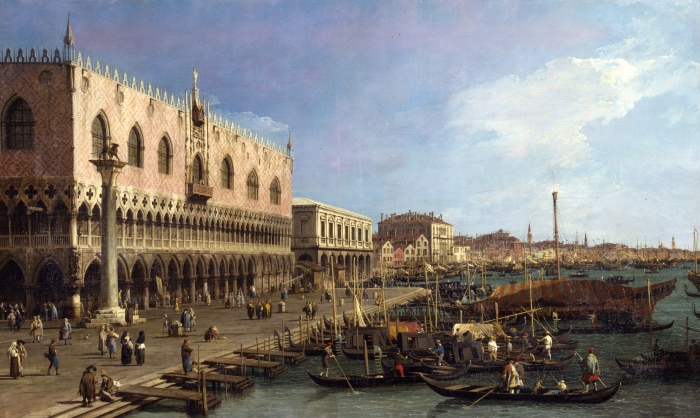 Antonio Canal known as Canaletto, The Pier towards Riva degli Schiavoni with the Column of Saint Mark – Milan, Collection of Ancient Art and Pinacoteca of the Sforza Castle

HOW CANALETTO PAINTED: 5 THINGS TO KNOW

How did Canaletto paint his perfect vedute (city views) almost similar to photographs?
This is the first question I asked myself when for the first time I was in front of a work by Canaletto.

At that time I was at Ca’Rezzonico, the Museum of the 18th-century Venice, and starting from this simple question, I began carrying out a research on the world of Antonio Canal, known as Canaletto, the leading exponent of Vedutismo and who spread throughout the world an image of Venice still present in the collective consciousness. 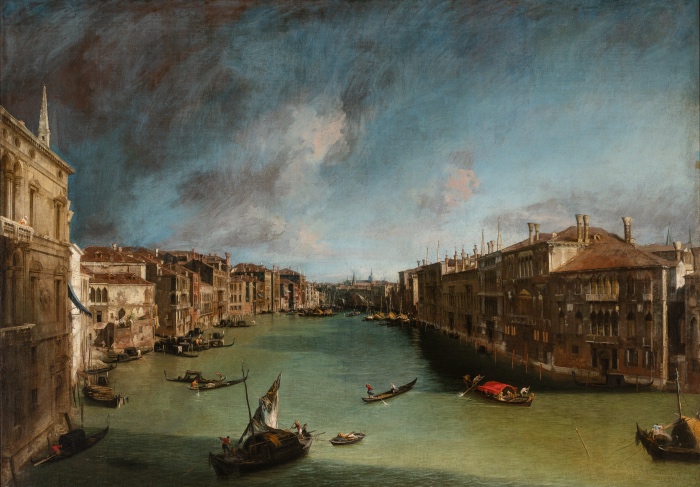 Canaletto was born in Venice on October 17th 1697 and his father Bernardo was a theatrical scene painter.
Since he was young, Canaletto learnt how to create stage decorations, and worked for stage shows, following his father’s job in Venice before and in Rome later.
It will be right his trip to Rome that would introduce him to Vedutismo (cityscape painting) and, back to Venice, he would establish contact with vedutisti (painters of vedute) Luca Carlevarijs and Marco Ricci, beginning to paint full time.

2. HOW CANALETTO PAINTED AND THE USE OF THE CAMERA OBSCURA

From a technical point of view, Canaletto’s paintings are the result of the composition of different perspectives.
However, the most important element of his work was the use of the camera obscura, a wooden box with a lens and a mirror which reflected the image on a surface where the artist put a sheet to trace the projected image.

3. THE VEDUTISTI AT THE TIME OF CANALETTO

The camera obscura was an instrument spread in the 18th century but known since the Renaissance,; however it was considered a stratagem used by those who couldn’t paint dal vero (in the open air) and who, through this means, could portray any landscape.
Canaletto actually used the camera obscura to capture each small detail and reproduce the depth of spaces. His aim was not to reproduce reality, like a photographer would do a century later; rather he wanted to create a “reality effect” in his paintings.

4. THE SUCCESS OF CANALETTO’S PAINTING

Thanks to his ability and technique, within a few years Canaletto became one of the most successful painter in Venice, but his fame spread far beyond the borders of his city.
His works entered the art collection of the sovereigns of Liechtenstein and of some important art dealers, but Joseph Smith was the decisive meeting, because that opened the doors of the rich English clientele to Canaletto.
Joseph Smith was a British art collector and diplomat who provided Canaletto with many and important commissions, leading the artist to move to England where he spent about ten years.

5. THE CONSECRATION OF CANALETTO’S PAINTING

The last years of Canaletto’s life were characterized by success and recognition.
He painted some important works for the German art dealer Sigismund Streit and the subject to which he dedicated in this phase is the “capriccio”, a genre in which the artist combines real or imaginary architectural elements, where ruins of ancient times often appear rearranged.
In 1763 Canaletto was admitted to the Accademia di Belle Arti di Venezia, the art academy of Venice.
He died in Venice on April 19th 1768. READ ALSO – Doges’ Palace tickets: how to buy your ticket to skip the line

4 thoughts on “How Canaletto painted: 5 things to know”