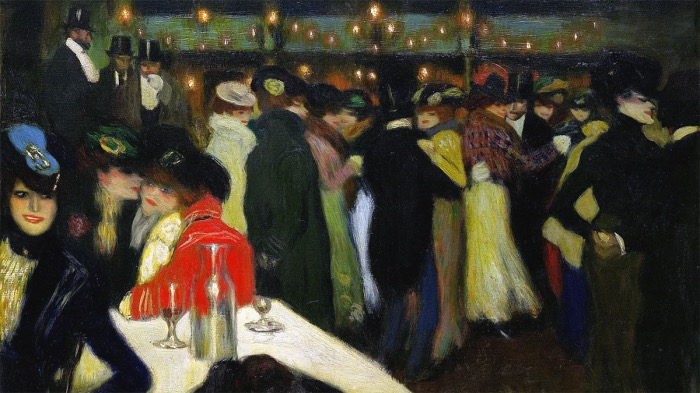 The painting Le Moulin de la Galette by Picasso was executed in 1900, and is considered one of his most interesting early paintings, prior to Cubism but already pervaded by the Parisian atmosphere that the Spanish artist had just started to experience.

In this post you’ll find a description of one of Picasso’s first masterpieces. When he was not yet Picasso that we all know today.

Pablo Picasso arrived in Paris for the first time in 1900, and together with his friend Carlos Casagemas immersed himself in the Parisian atmosphere, in search of inspiration and a new way of painting.
Picasso already knew  Impressionist painters’ works and the post-Impressionism experience as well, but only starting from 1900 he could experience the atmosphere of Parisian cafés and look at a short distance the characters  portrayed in Degas’s works,   Manet’s works  and  Toulouse-Lautrec’s works.

In Le Moulin de la Galette by Picasso the artist himself is the observer that is on our same level.
We feel like we can see him walking into the café, ordering something to drink, looking at those people surrounding him and starting drawing. Some girls notice him, smile, whisper something in their ear and strike a pose.

The painting Le Moulin de la Galette by Picasso is a photograph of what Picasso himself sees.
It would take many years before Picasso inaugurated the season of Cubism with Les demoiselles d’Avignon, but this painting is the starting point for his pursuit of something new.

In Le Moulin de la Galette by Picasso is not any criticism, any judgment, any opinion about the life inside the café.
Lights are twinkling and make everything a little confusing. Faces are spots, people dancing are almost spots of colour.

Picasso describes the reality in front of his eyes, and puts on the canvas also the feeling of hearing laughter, voices and music.

Looking at the group of women on the left, you can notice two of them whispering or kissing. Instead, the third one is leaning her arm on the white small table and is the figure with the more clearly defined face of the whole painting.
The third woman, seated and relaxed, is smiling and has been identified as Germaine Gargallo, a model Picasso had knew in the Parisian studio of Isidro Nonell, a Spanish painter.
Picasso’s friend Carlos Casagemas would commit suicide shortly after Picasso’s return to Spain because she didn’t return his love.

Then Germaine Gargallo would become Picasso’s lover and later his friend. 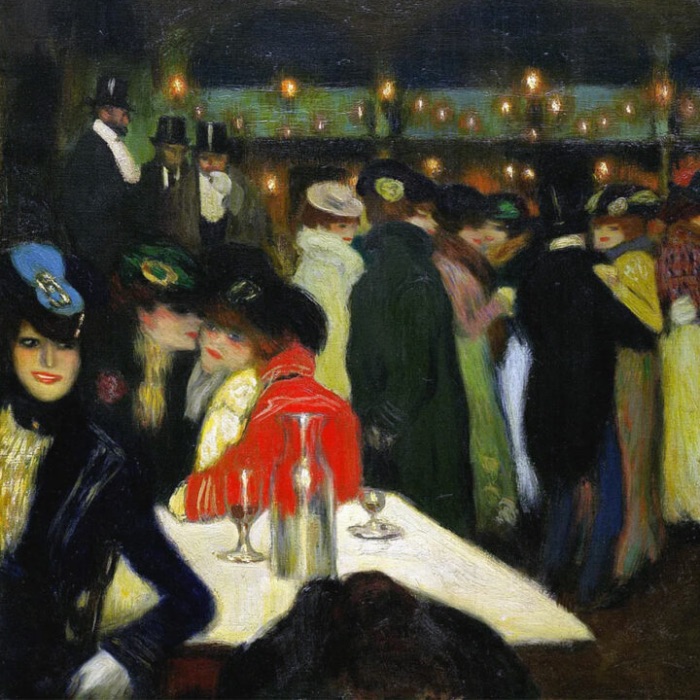