Considered by many scholars the first Cubist work, actually, Les demoiselles d’Avignon doesn’t decompose completely the volumes yet, but simplifies the forms.
With this painting Picasso inaugurates a new season of art and provides the bases for what would be real Cubism.

Here are 5 things to know about Pablo Picasso’s painting.

Picasso worked on the Les demoiselles d’Avignon between 1906 and 1907, in Paris, and it’s the result of intensive work characterized by hundreds of preparatory studies and sketches.
So, even though the work may appear incomplete in some points, it’s the result of choices in which Picasso didn’t leave anything to chance.

2. MEANING OF THE PAINTING

In the first version of the painting Picasso had described the scene inside a brothel, where a sailor suffering from syphilis was waiting to be curated by five women.
The artistic references were obviously The Turkish Bath by Ingres (1869) and The Large Bathers by Cezanne (1890-1892). But Picasso abandoned the first idea to represent an allegory of the female body, seen as a beautiful and fascinating, but also potentially dangerous and double.

3. WHY THE WORK IS ENTITLED LES DEMOISELLES D’AVIGNON

The painting had originally to be entitled “Le Bordel d’Avignon” but in the definitive version the title was changed into Les demoiselles d’Avignon, as a reference to a street in Barcelona, famed for its brothels known and probably visited by Picasso when he was young.

5 naked young girls posing in front of the painter.
That’s what Picasso painted in Les demoiselles d’Avignon.
There is not perspective, the planes seem to be overlapped and the volumes of the bodies are sharp.
The girl in a crouch looks straight ahead, but her body, actually, shows her back; the girl on the left resembles, in her profile, the Egyptian art; the two girls in the middle, in the deformation of the face recall African sculptures.
The are many references to ancient art in this painting and also the colours used, variation of ochre and blue, are reminiscent of classical art and, more in general, a desire to simplify as much as possible the work.

The painting remained in Picasso’s studio until 1916, where many artists, friends and critics admired it until, in 1920, was bought by a French art collector, and in 1937 was acquired by the MoMA, the Museum of Modern Art of New York, where is now on display.

Enjoy skip-the-line access to visit The Museum of Modern Art, in the heart of New York City. For Information and tickets read the post about MoMa tickets. 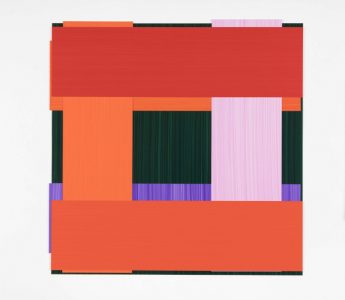