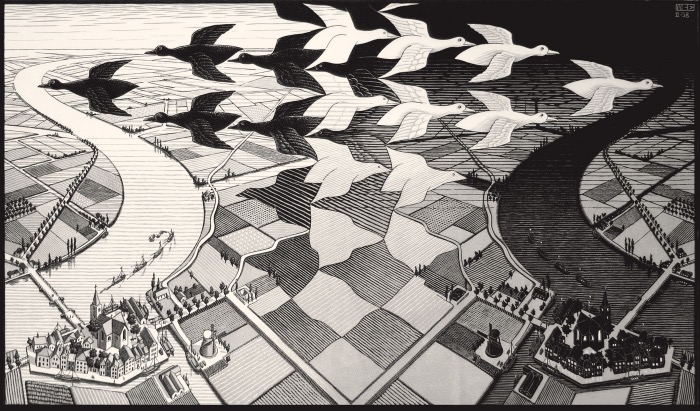 Escher’s life has been as fascinating as his visionary works.
His impossible universes, made of optical illusions and real but seemingly virtual landscapes, have influenced the modern imagination and are still a source of inspiration for contemporary creatives.

Escher was born and died in Holland but for many years he lived in Rome and there are many exhibitions dedicated to his work (the last one in Florence).
Curious about everything, a brilliant experimenter and a unique artist in the artistic panorama of the 20th century, Escher is the creator of impossible and fantastic worlds that have anticipated the cinematic tales of our times. 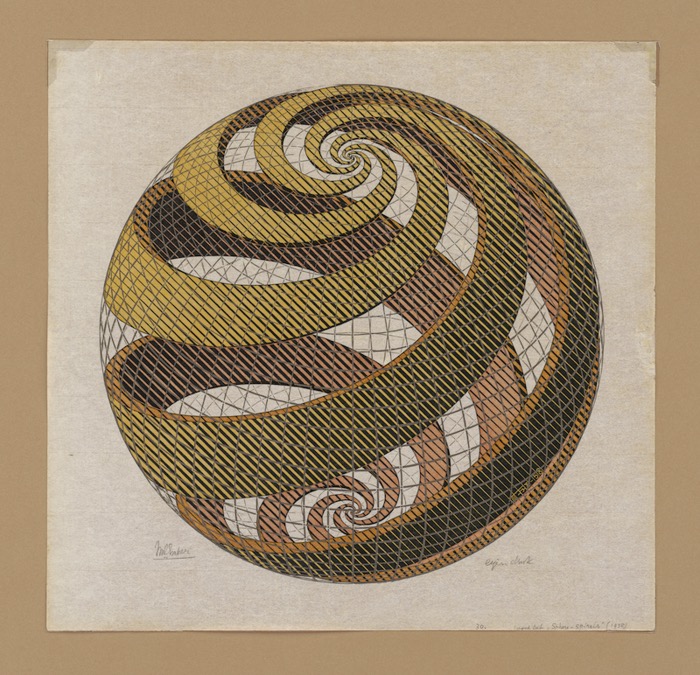 LIFE OF ESCHER: THE BEGINNINGS

Escher’s early works were inspired by Art Nouveau.
This influence is due to an important Dutch Art Nouveau artist who was Escher’s teacher at the graphic and decorative arts school in Harlem.
This teacher, Samuel Jessurun de Mesquita, introduced Escher to an interest in flowers, insects and nature in general.

From an early age Escher began to travel and one of his first destinations was Italy, which would welcome him from 1922 to 1935.
He visited southern Italy in particular, drawing monuments, landscapes, flora and fauna, which he transformed into graphic works upon his return to Rome, where he had settled: woodcuts and lithographs.

Among the things to know about Escher is that his connection with Italy has always been deep and important.
Escher had visited Italy with his parents in 1921 and then in 1922.
After finishing his studies, he decided to settle in Rome in 1923.
Thanks to his stay in Italy, Escher was able to collaborate with other artists living in Rome, such as Joseph Haas Triverio, a graphic artist of Swiss origin, who not only introduced him to the art gallery circuit but was also his faithful companion on the journeys they undertook each spring to depict Italian landscapes and villages.

In 1936, Escher’s second trip to southern Spain marked an important moment in his artistic development.
He had the opportunity to visit famous monuments such as the Alhambra in Granada and the Mezquita in Cordoba, from which he drew inspiration for a methodical study of the motifs used by 14th century craftsmen to decorate the walls and arches of Moorish architecture.

Escher became interested in tessellation: geometric decoration based on triangles, squares or hexagons that are repeated, like tiles, to cover a plane without leaving empty spaces.
He worked on 137 watercolours, collected in an exercise book, reproducing different tessellation motifs and representing all 17 different ways of filling a flat surface through the operations of translation, rotation and reflection of a single tessellation, as well as a study on the various possibilities of colouring.
Escher thus modified the geometric shapes, the basis of his tessellations, with animated figures such as animals or human figures: a characteristic that became distinctive of his art, in which fantasy, geometry and figurative subjects are skilfully combined.

The different types of tessellation created by Escher give rise to whirlpools of transformations and abstract shapes, turning into animated forms.
The Dutch artist thus creates a universe in which birds can transform themselves into fish and a lizard becomes the cell of a beehive.
These are true metamorphoses and sometimes lead to antithetical but complementary elements, such as day and night or good and evil, interweaving opposites within the same composition. 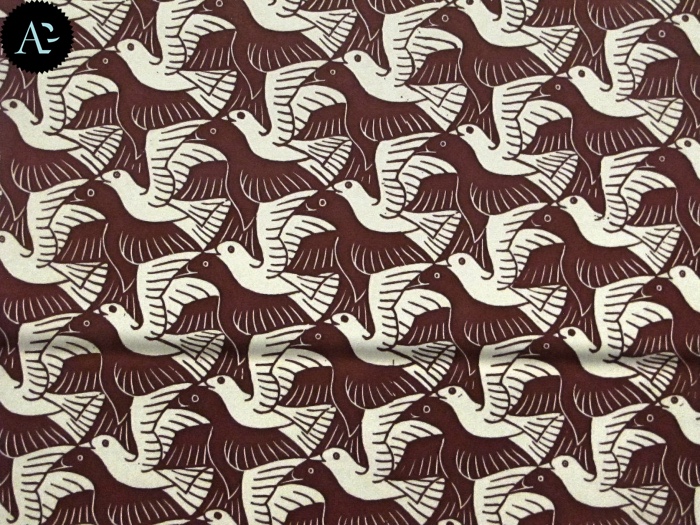 THE STRUCTURE OF SPACE IN ESCHER’S WORKS

From his earliest landscape prints Escher showed an attraction for the structure of space.
In 1937, after leaving Italy, he stopped representing space in a linear manner, as he had observed it, but began to create images in which different spatial entities converge into a single print.
Logic governs these ‘visions’!

His focus on mathematical structures reached its peak some time later, as a consequence of his passion for crystal shapes and topological surfaces such as the Moebius strip, i.e. objects that are perceived as two-sided surfaces but which, on closer observation, show to have only one face. 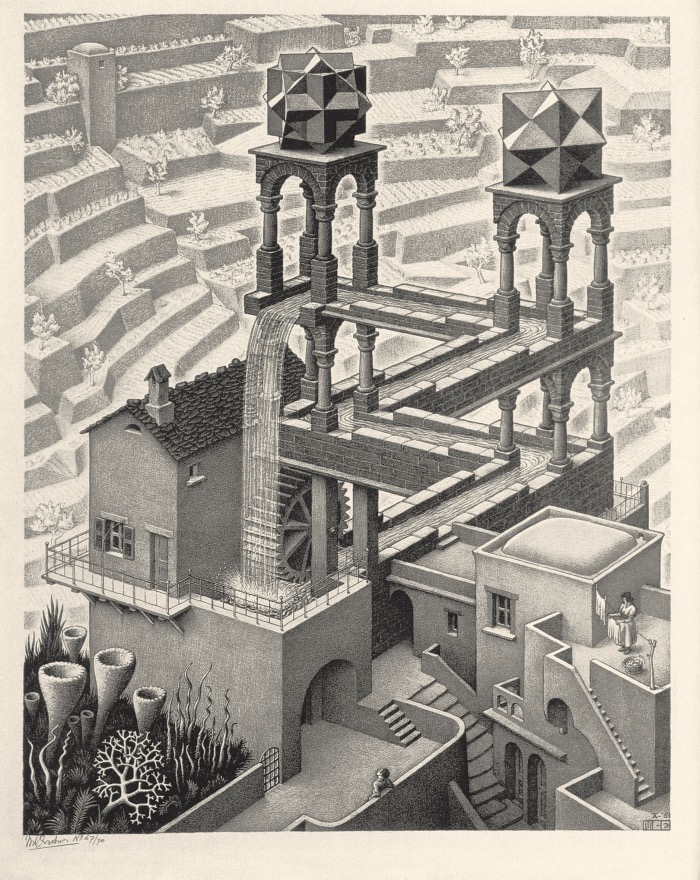 Escher’s mathematical knowledge was visual and intuitive, while his geometric architectures and compositions were characterised by perspective visions that, at first glance, appeared plausible but, upon closer inspection, turned out to be impossible.

On the occasion of the International Congress of Mathematicians in Amsterdam (1954), a number of prints by the artist were exhibited and he began to be highly appreciated by the scientific community.
The artist thus initiated a dialogue with mathematicians and crystallographers that inspired even more his research into impossible constructions, optical illusions and the representation of infinity.

Escher only came to fame in the last years of his life. For most of his existence he devoted himself to even modest commissioned works for a living.
For example, he produced covers for a concert programme, simple greeting cards and ex-libris (decorated labels that were attached to books to indicate the owner).
He also carried out public commissions such as designing banknotes and stamps, while in 1967 he executed a seven-metre engraving entitled Metamorphosis III for the post office in The Hague, the Netherlands: a work that is now considered one of his masterpieces.

Today, Escher is a source of inspiration for many artists and references to his work can be found in the most unlikely fields.
Many contemporary painters and digital artists have been influenced by Escher’s work in the field of tessellation.
Above all, it is the representation of paradox that had a major influence on many musicians and pop groups of the 1960s, who used Escher’s images on their album covers.

The Dutch artist’s geometries have also inspired several comic and cartoon characters. The world of advertising has found fertile ground in Escher’s whimsical art and internationally renowned fashion houses and designers, such as Chanel or Alexander McQueen, have paid homage to his imaginative universe on their catwalks. 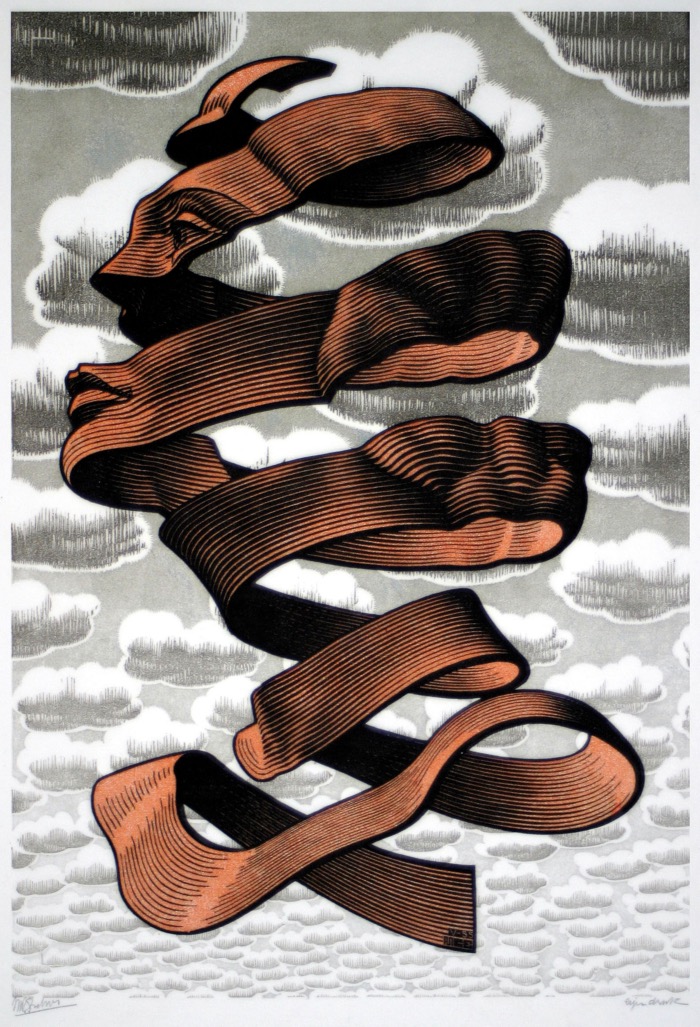