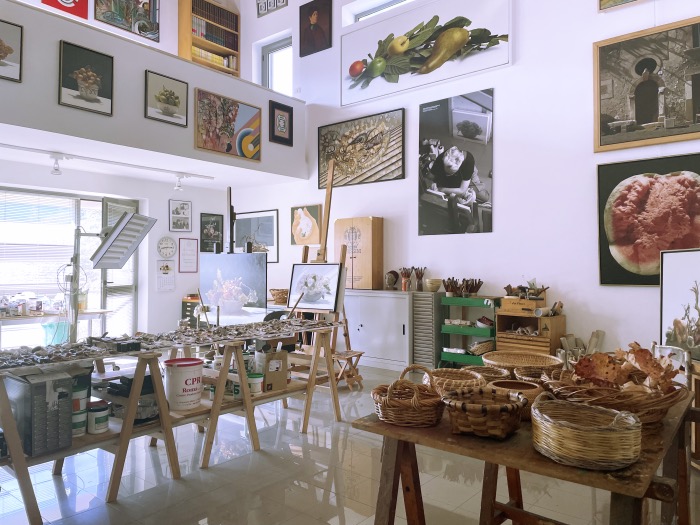 A little more than a year after Luciano Ventrone’s death on 16 April 2021, the Luciano Ventrone and Miranda Gibilisco Foundation opens to the public what was once the home of the Italian painter active between the second half of the 20th century and the early 2000s.

This makes it possible to visit the “Casa-Museo Luciano Ventrone” in Collelongo and learn about the enormous legacy of an artist who spanned more than half a century, going down in art history as the “Caravaggio of the 20th century”– as the great art critic Federico Zeri defined him. 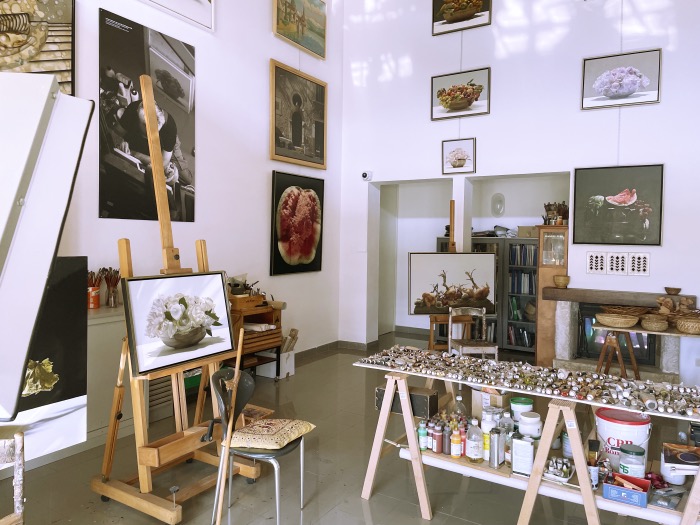 In Collelongo, the small mountain village in the province of L’Aquila nestled in a valley that stretches from the Fucino up to the Abruzzo National Park, Luciano Ventrone established his favourite atelier where the paintings that have made him famous throughout the world, starting with his now iconic still lifes, saw the light.

The Casa-Museo Luciano Ventrone opens with a dedicated exhibition, a programme of free guided tours by appointment and a programme of initiatives in collaboration with local institutions and artist residency projects.

A VISIT TO THE LUCIANO VENTRONE HOUSE-MUSEUM

Luciano Ventrone (1942-2021) built his home in Collelongo from his studio with high ceilings and a glass wall facing the mountains.
It is a veritable laboratory of experimentation crossed by a table several metres long entirely covered with a collection of oil paints from all over the world, including many that are now rare and out of production.
The walls all around are now covered with paintings that look like photographs and reconstruct the artist’s almost sixty years of research, contributing to a unique and kaleidoscopic total reconstruction of his work.

Among the works on display is one of the first paintings executed by Luciano Ventrone at the young age of fourteen: a view of Lake Thun (where the Alps give way to the Bernese Oberland) taken from a postcard.
A recently rediscovered work that leaves one open-mouthed for the precocious talent for composition and the already astonishing knowledge and mastery of the colour palette.

During the visit, another great emotion arrives in front of the last work executed by the artist, the canvas entitled Galaxies, a large still life measuring 90 x 130 cm, completed but without the signature of the artist who died before it could be affixed. 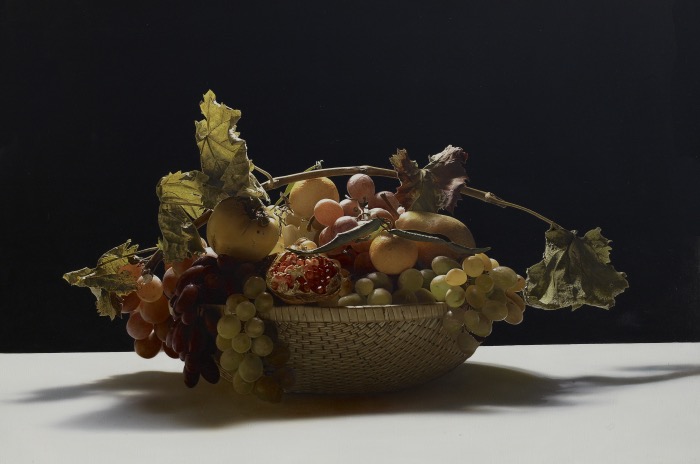 As soon as one crosses the threshold of Luciano Ventrone’s studio, one is enraptured by a large canvas with a still life in anamorphosis from the early 1980s, formerly from the renowned Il Gabbiano Gallery in Rome and recently bought back by the artist’s widow from an American collector.
The anamorphoses are works that require true compositional virtuosity for their realisation, as they are optical deceptions, representations that only become comprehensible to the eye with the use of a mirror or with the viewer’s grazing view of the work.

The tour then continues through a series of unpublished paintings from the 1970s inspired by the world of science fiction of which the artist was a great fan, in particular the literature of Isaac Asimov and 2001: A Space Odyssey, the great masterpiece directed by Stanley Kubrick that is considered one of the cult films of science fiction.

The exhibition also includes sketches of some of Ventrone’s famous ‘challenges’ to works of Caravaggio now scattered in private collections: these are reproductions of some of the great painter of light’s masterpieces in anamorphosis reflected on light bulbs, executed in the early 1980s. 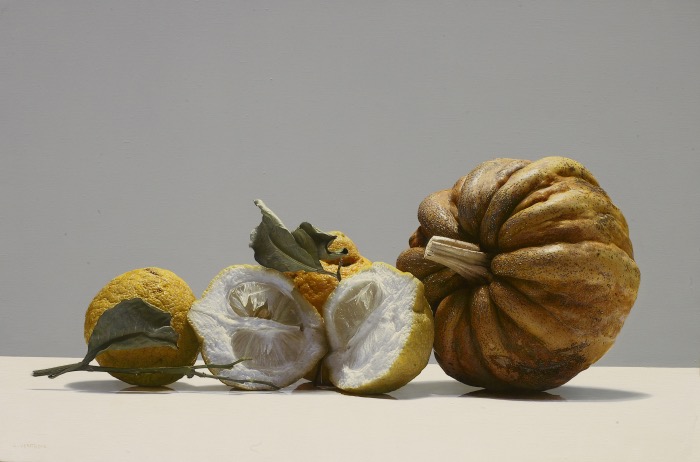 The Casa-Museo Luciano Ventrone also houses the photographic works of Miranda Gibilisco (Syracuse, 1953) who has collected over the years more than 30,000 shots taken on journeys across seas, deserts, cultures and ever new worlds, exhibited at various art exhibitions in Italy and abroad.
Married at a very young age to Ventrone, Miranda followed his activity constantly. Her first photographs as a professional represent the outcome of her collaboration with her husband, whose work she accompanied for over fifty years, preparing as a photographer the sets where he would realise his works.

HOW TO VISIT THE LUCIANO VENTRONE HOUSE-MUSEUM

The Luciano Ventrone House-Museum officially opens on 1 July 2022 by appointment only, booking in the appropriate section of the website fondazionelucianoventroneemirandagibilisco.org

The entrance ticket is reduced for the inhabitants of Abruzzo.
Visits are enhanced by a cultural mediation service by the Education Office of the Luciano Ventrone and Miranda Gibilisco ETS Foundation, which makes the museum visit an active and participatory experience.

WHERE THE LUCIANO VENTRONE HOUSE-MUSEUM IS LOCATED

Collelongo (AQ) is an important tourist destination for both its archaeological heritage and its geographical position within the outer protection limits of the Abruzzo National Park.
The large village is characterised by extensive natural views of significant biological and landscape interest with a varied presence of flora and fauna. It is an island in the midst of history and nature that offers its inhabitants and numerous visitors a comprehensive response to the needs of culture and leisure.