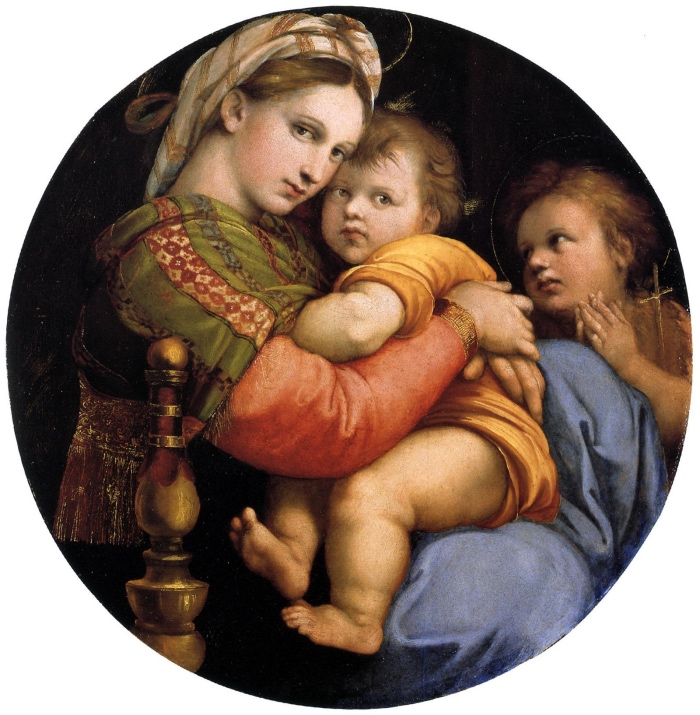 MADONNA OF THE CHAIR BY RAPHAEL: CURIOUS FACTS AND DESCRIPTION OF THE PAINTING

In the Madonna of the Chair Raphael describes one of the most delicate and tender scenes of all his artistic production.
It seems that this painting emanates an infinite tenderness that I could hardly resist when I was in front of it and I exchanged glances with the Virgin Mary and Child.

Raphael’s life was short, he died at the early age of 37, but he was the interpreter of an ideal of beauty and harmony that never goes out of fashion, and in this post I’ll describe the Madonna of the Chair by Raphael, I’ll tell you some curious facts and I’ll explain where you can admire this work.

Madonna of the Chair by Raphael 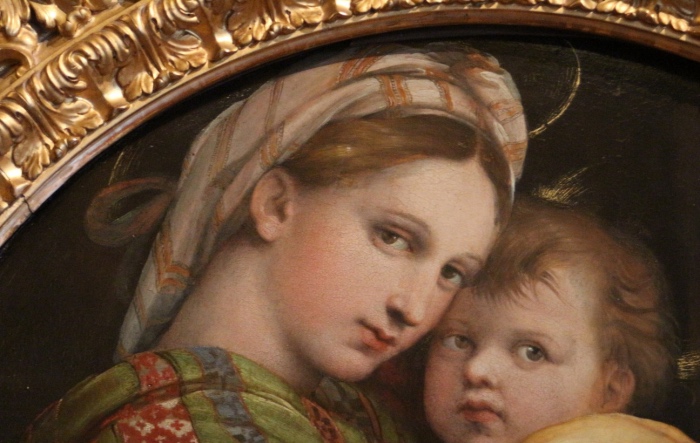 MADONNA OF THE CHAIR BY RAPHAEL: ANALYSIS OF THE PAINTING

The  Madonna of the Chair was painted by Raphael between 1513 and 1514.
It was probably a work painted for a private client, maybe for Pope Leo X, but among all the similar subjects painted by the artist this one possesses a great delicacy and especially the naturalness of an intimate scene.
The Virgin Mary and the Child look at the spectator, who feels completely involved. It’s thanks to the gazes painted by Raphael!

When I was in front of the Madonna of the Chair by Raphael I felt a sense of tenderness and anyone around me couldn’t resist the beauty that the painting emanates.
In front of this painting it seems that you can feel the swinging of the chair and witness a mother giving his child a cuddle.

WHERE TO ADMIRE THE MADONNA OF THE CHAIR BY RAPHAEL

The painting is housed in Florence, in the Palatine Gallery of the Pitti Palace.
It seems that the Madonna of the Chair by Raphael arrived in Florence in 1631, together with the inheritance and the collection of works of art of Vittoria della Rovere. In 1635 the painting was certainly at the Uffizi Gallery.
For a short period, from 1799 to 1816, the painting was moved to Paris by the French, but it was recovered quickly.

CURIOUS FACTS ABOUT THE MADONNA OF THE CHAIR

The gazes, the chair, the striped fabric on the Virgin Mary’s head and the coloured shawl covering her shoulders have always captured the imagination of people and scholars.
According to a very popular story, it seems the Raphael portrayed a young peasant cradling her baby near Velletri.
A German writer of the 19th century, instead, wrote a novel which tells that Raphael painted, on the cover of a barrel, the portrait of the daughter of a vintner with her two children.
And some scholars affirm that the Madonna is actually the portrait of the Fornarina, the woman loved by Raphael and already used as a model for the “Sistine Madonna”, painted  in the same period (1513). 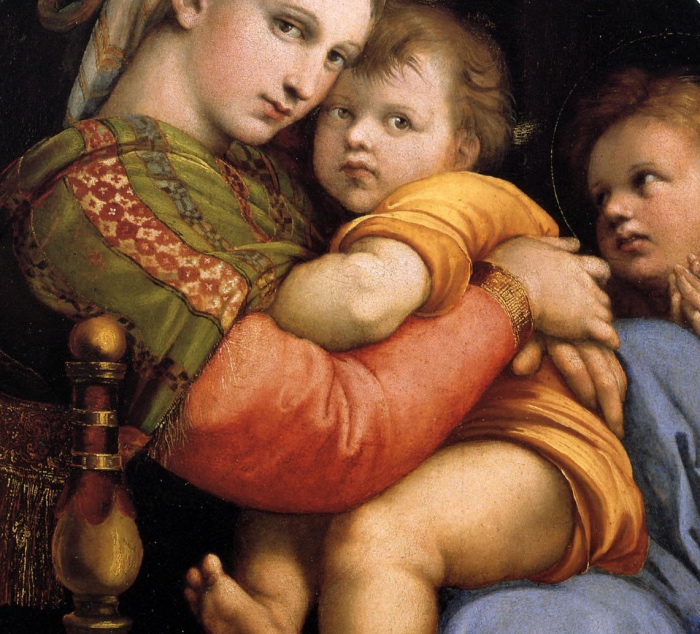 One thought on “Madonna of the Chair by Raphael: curious facts and description”