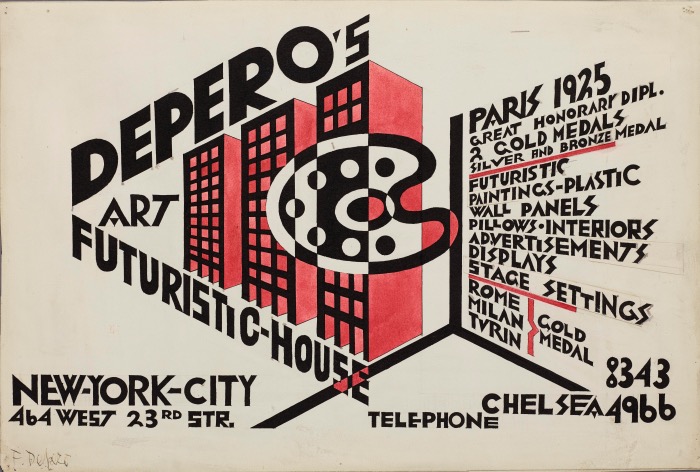 5 THINGS TO KNOW ABOUT THE LIFE OF FORTUNATO DEPERO

Do you know the life of Fortunato Depero and his works?
His life is studded with successes in every creative field, from advertising to illustration, from set design to art, but also with a few slips. After all, he was an artist who loved to take risks and threw himself headlong into every adventure!
He was a leading exponent of Futurism and his creations continue to inspire artists all over the world.

This is the post to get to know the life of Fortunato Depero in five points. 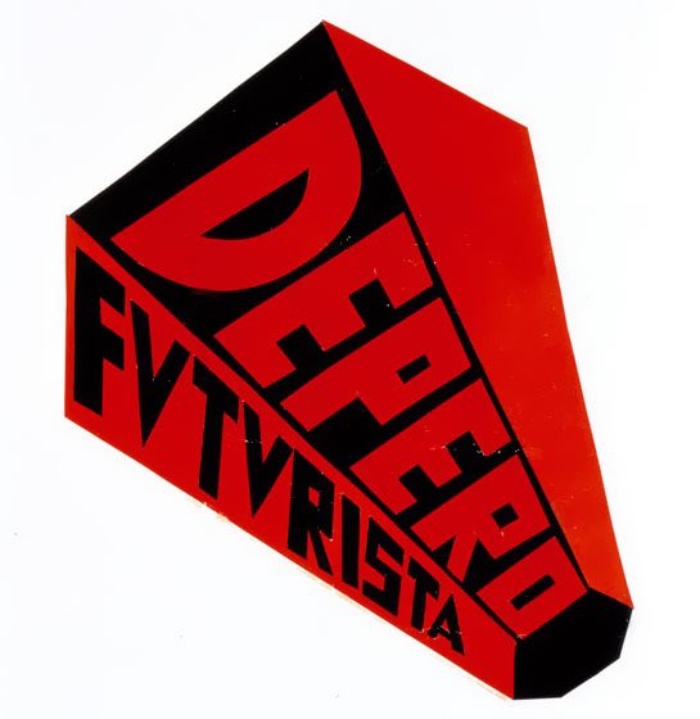 1. THE BEGINNINGS OF FORTUNATO DEPERO

Fortunato Depero was born in Fondo, in the province of Trento, in 1892.
He moved with his family to Rovereto when he was still very young and it was there that he attended an art and technical school.
Art was his path, Depero realised this immediately, and he wanted to enter the Academy of Fine Arts in Vienna, but was rejected. He then began to attend, as a trainee, sculptor Scanagatta’s studio where he worked on everything, even gravestones.
In 1913, he finally left Trentino and moved to Rome with Rosetta Amadori, his companion in art and life.
In Rome, Fortunato Depero’s life changed because he met Balla and Marinetti.
It was the beginning of Futurism!

In 1914, Fortunato Depero produced a series of drawings inspired by the simultaneity and dynamism of Umberto Boccioni.
The following year, in 1915, he signed the Manifesto of Futurist Reconstruction of the Universe with Giacomo Balla, which hypothesised a fusion of the different arts and a greater social involvement of the artist.
However, the First World War was looming over Europe and Italy and Depero decided to enlist as a volunteer, but was exonerated for health reasons.

3. DEPERO REALISES THE FUSION OF THE ARTS

Fortunato Depero’s life and work fully adhered to the contents of the Futurist Reconstruction of the Universe Manifesto, devoting himself to the most diverse projects.
He worked for director Sergeij Diaghilev, creating the sets and plastic costumes for the ballet ‘Le chant du rossignol’ by Igor Stravinsky. He met Cocteau, Picasso and the decadent poet Clavel with whom he performed ‘Balli plastici’ in Rome, which represented Depero’s first attempt to replace the traditional actor with puppets animated by the Gorno dell’Acqua puppet company, directed by Vittorio Podrecca.

In 1919, the artist returned with his wife to Rovereto where he opened the Casa d’Arte Futurista Depero, a sort of workshop for the production of cloth inlays, collages and applied art objects.
He also produced interior furnishings, such as the Cabaret del Diavolo for which he also made the wall decorations. A transversal project that anticipates a modern installation: it will be the artist who will play the different roles of designer, decorator, set designer, according to what was conceived in the manifesto Ricostruzione futurista dell’universo (Futurist Reconstruction of the Universe).
In 1923, he participated in the First International Exhibition of Decorative Art in Monza. In 1924, during the tour of the Nuovo Teatro Futurista, he staged the mechanical ballet Anihccam del 3000 (the word ‘machine’ in italian reverse) at the Trianon Theatre in Milan, which was later performed in more than twenty Italian cities. Depero’s successful participation in international events such as the Exposition Internationale des Arts Décoratifs et Industriels Modernes began in 1925 and in the same year he was in Paris. 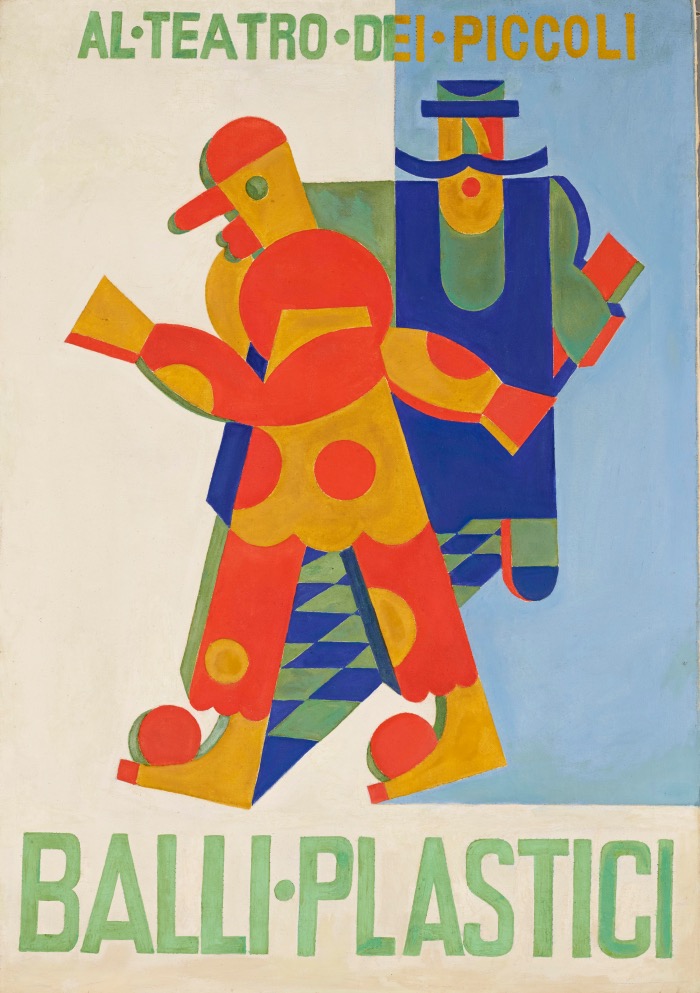 Cartellone per I Balli Plastici

In 1928, Fortunato Depero’s life moved to New York.
He arrived in the American metropolis with his wife Rosetta driven by a desire to confront modernity and convinced that the New York environment would welcome the works produced by his Art House.
Depero put his skills in the fields of graphics, design and interior decoration to good use, although without achieving any real economic success. His studies for the covers of Vogue and Vanity Fair, the furnishings for Ristorante Zucca or the variety of works exhibited for his solo show at the Guarino Gallery date from this period.

Determined to project himself into an international dimension, he immediately opened the American branch of the House of Art, Depero’s Futurist House, and began a major promotional campaign with events, posters and posters.
Only the Great Depression, the great economic crisis of 1929, stopped him and convinced him that the American market was more suited to industrially rather than handcrafted products.
Depero’s venture failed and he turned back to the two fields that, in Italy, had brought him some profit: theatre, so he would collaborate in particular with impresario Leon Leònidoff’s Roxy Théatre; advertising, so he would design covers and illustrations for famous magazines such as Vogue, Vanity Fair, The New Yorker, poised between Futurism and the Art Deco taste in vogue in the United States.

In 1927, he published Depero-Dinamo Azari, the famous bolt-on book, the first example of the Futurist book-object, which became part of an important Sicilian collection.
He worked extensively with Bianchi, Strega and Campari for whom he produced over 100 posters.

Fortunato Depero’s life is studded with many successes, a few slips and a lot of art.
In 1928 he held a few exhibitions in private galleries in New York, but above all he worked as an interior designer, set and costume designer, publicist and illustrator.

In 1930 he returned to Italy: the following year he was in Rome at the ‘I Quadriennale Nazionale d’Arte’, then at the Venice Biennale and then at the V Triennale in Milan.
In 1948 he returned to New York where he held two solo exhibitions, but America did not like the Futurists and Depero retired to a small town in Connecticut where he worked until his return to Italy.
On his return to Italy he immersed himself in the decoration of the Provincial Council Chamber in Trento and in 1950 published the Manifesto of Nuclear Painting and Plastics.
From 1957 onwards he dedicated himself to setting up the Galleria Permanente Museo Depero in Rovereto, an institution founded in collaboration with the municipality, and which today has more than 3000 paintings and drawings, around 7500 manuscripts and a rich library on Futurism.

Depero died in Rovereto on 29 November 1960, a year after opening the first Futurist museum in Italy. 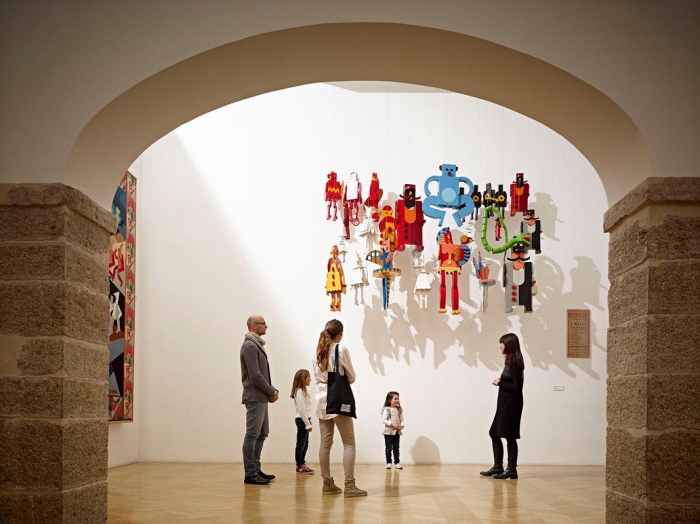 Ricostruire e meccanizzare l’universo (Reconstructing and Mechanising the Universe) is a collection of the artist’s theoretical writings that allow us to retrace and analyse the most significant stages of his creative itinerary. Depero was in fact the protagonist of the mechanical art that characterised Futurism in the 1920s.
Ricostruire e meccanizzare l’universo is available on Mondadori Store.