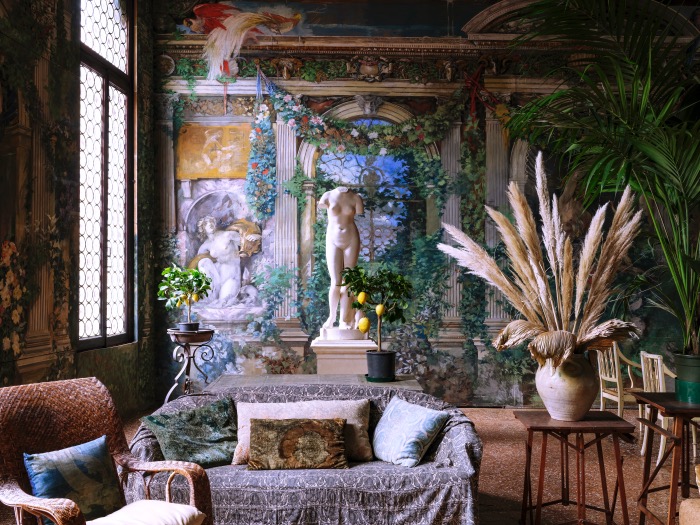 THE WORKS OF THE FORTUNY MUSEUM, THE HOME OF A BRILLIANT ARTIST

What are the works in the Fortuny Museum and why should you visit this Venetian museum at least once in your life?
The gothic Venetian palace that was the home but also the workshop of Mariano Fortuny y Madrazo (Granada 1871, Venice 1949) and his wife Henriette Nigrin, was one of the focal points of intellectuals in the early 20th century.

In cosmopolitan and industrious Venice, it was almost a must for the refined elite of the time to visit Mariano Fortuny and his wife, and it is now important to visit these rooms to discover the importance of his creative work in the culture of the early 20th century.

The works of the Fortuny Museum

When Mariano Fortuny y Madrazo decided to settle in Venice, he chose Palazzo Pesaro degli Orfei to live and work in.
He was a son of art, belonging to one of the most important families in the artistic and cultural scene of 19th century Spain, and upon entering the palace that was to be his home in 1898, he found the building fascinating but decadent.
Palazzo Pesaro degli Orfei belonged to the late Venetian flamboyant Gothic style, but by then the glorious past was only a memory for those walls. Mariano restored it and within about ten years managed to bring it back to its splendour, restoring balance and proportion to the structure.

Soon the palazzo, which was his home and atelier, became the salon of the Venetian and international cultural elite.
Walking through the rooms of the museum, we still seem to hear the voices of those who visited Mariano and his wife, and we can also easily imagine the interesting dialogues that only a multifaceted man like the Spanish artist could stimulate.
He who was an eclectic, tireless artist, open to modernity and the innovations of the 20th century.

Mariano Fortuny was not only an artist but also a skilful entrepreneur capable of putting his creativity into a variety of artistic disciplines: painting, sculpture, engraving, photography, theatre, lighting technology, design, fashion, and the creation of furnishing fabrics.
He invents production processes, creates new materials, designs technical instruments for which he registers trademarks and patents.
This is the world in which influences, ideas and materials mingle. A world summed up in the rooms and works of the Fortuny Museum.

PAINTINGS AND WORKS IN THE FORTUNY MUSEUM

Along the immense Portego, amidst a succession of fairy-tale fabrics, one can admire the original lamps designed by Mariano himself and inspired by the planets, as well as paintings, furniture and objects that recall his Spanish origins.
One can admire the artist’s and his father’s pictorial production, thanks to a cycle of small landscape paintings set up in the large glass cabinet designed by Mariano, all mixed with portraits and the many works inspired by Henriette, his wife and muse: the face, the hair, the poses.

A fabulous wall cycle can be admired on the first floor.
It is a work commissioned and created by Mariano Fortuny, who invented a special paper frame for this project, glued onto painted hemp cloths and fixed to the walls.
The composition covers three sides of the room, with a total area of approximately 140 square metres.
Begun in 1915, it was completed in the 1940s.

Supported by the artifice of trompe-l’œil and a harmonious layering of colours, the creation gives the space great luminosity.
An ideal ‘enchanted garden’ enlivened by allegorical figures, satyrs and exotic animals: all set in a Corinthian loggia reminiscent of Paolo Veronese’s illusions, enriched with luxuriant plant motifs, lush garlands and refined drapes. 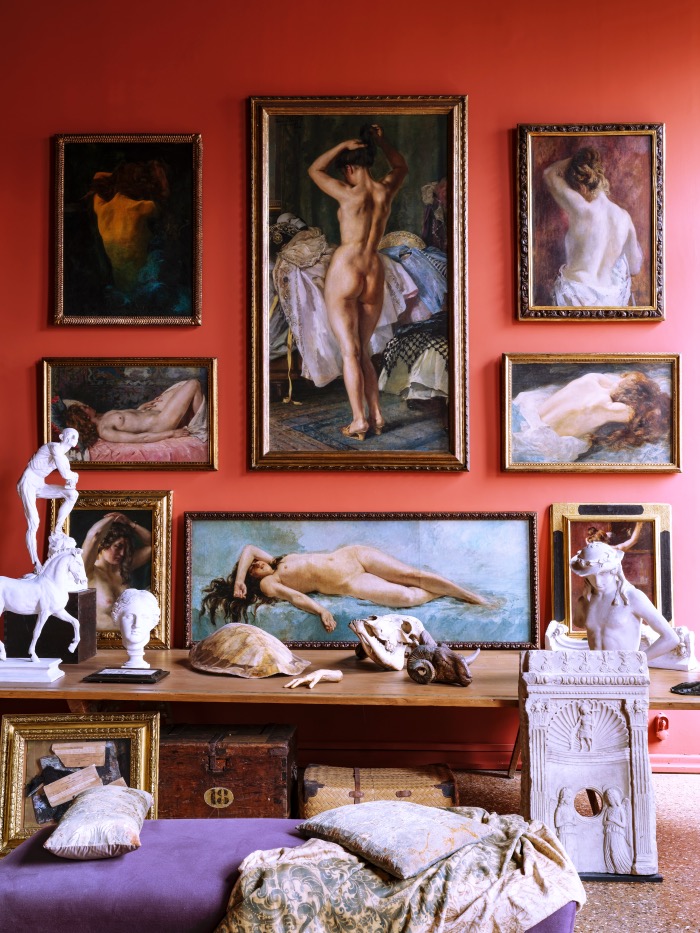 The precious printed velvets on display are an invention of Mariano’s, inspired by Renaissance motifs.
There is also the original model of the monumental funerary outfit for the 14th Duke of Lerma, who died in the Spanish Civil War, where an exceptional black velvet dalmatic printed in gold and silver stands out, and the stage costumes made by Mariano for Giuseppe Verdi’s Otello. The opera was performed in Venice, in the courtyard of the Doge’s Palace on 18 August 1933 with sets and costumes by Mariano Fortuny, the company of Kiki Palmer and the direction of Pietro Sharoff.

THE ATELIER STUDIO OF MARIANO FORTUNY

Not to be missed is the artist’s studio recreated down to the smallest detail, with his easel, nude tests, various models and anatomical examples, and the colours he himself patented (no less than 46 temperas and 4 preparatory paints): all materials conserved in the Muve Foundation’s archives and storerooms.

Also visible are the copies from antiquity, i.e. those reproductions of works by Tiepolo, Tintoretto, Goya, etc., which are a fundamental exercise and source of knowledge and inspiration for a painter. There is also Fortuny’s passion for Wagner, with paintings inspired by his works from Parsifal to The Ring of the Rhine and the sketches of the sets and costumes designed for the premiere of Tristan and Isolde at La Scala in Milan.

His love of music, especially that of the German composer Wagner, and his idea of a total work of art led Mariano Fortuny to take an interest in set design, theatre painting and lighting technology, culminating in the revolutionary invention of the ‘Cupola’, with which he brought indirect and diffuse light, coloured skies and clouds, to theatres all over Europe.

Photography, another of Fortuny’s fields of interest, allows us to get to know the places Mariano frequented, particularly Paris and Venice, but also Greece and the Orient.
The friends and protagonists with him on those journeys are: Mario De Maria, Cesare Laurenti, Ettore Tito, Pompeo Gherardo Molmenti, Felice Casorati, Lino Selvatico, Giovanni Boldini, Arturo Toscanini, Auguste Rodin, Gabriele D’Annunzio, Marcel Proust, Eleonora Duse, Isadora Duncan, Sarah Bernhardt, the Marchesa Casati Stampa, Consuelo Vanderbilt and many others.

The truly unmissable place in the museum is the fashion room – the showroom reserved for the most important female elite of the time.
In this room, one can relive the authentic atmosphere of the artist’s home-atelier and imagine women conversing with Mariano and his wife as they tried on dresses made of veils, wore the shawls designed by Mariano such as the Knossos and the world-famous Delphos: the pleated silk dress created in partnership with Henriette, which all the divas wanted to wear.

THE PERSONAL COLLECTION AND THE WORKSHOP

The second floor of the museum houses all his skills and knowledge, his arts: the behind the scenes of his creations.
There is the printing and typography, with presses, engravings, his own productions and those equally admirable of his father y Marsal, and the works collected by the family such as engravings by Goya, Tiepolo, Piranesi. Then there is the textile workshop of clothes and fabrics, with his mother’s important collection of antique clothes and fabrics, the original matrixes for printing and the models for cutting; the theatre, with the wooden stages made by Mariano to rehearse the play of light and stage effects.

Alongside this is the photography workshop, with the experimental equipment that would lead him to patent a special photographic paper and, finally, the painting business and his beloved books. Mariano’s studio-library, immortalised in so many photos of the time, is accessible to the public and surprises with the furniture he designed, the clippings and curiosities he kept, the lined filing cabinets and his most personal memories. 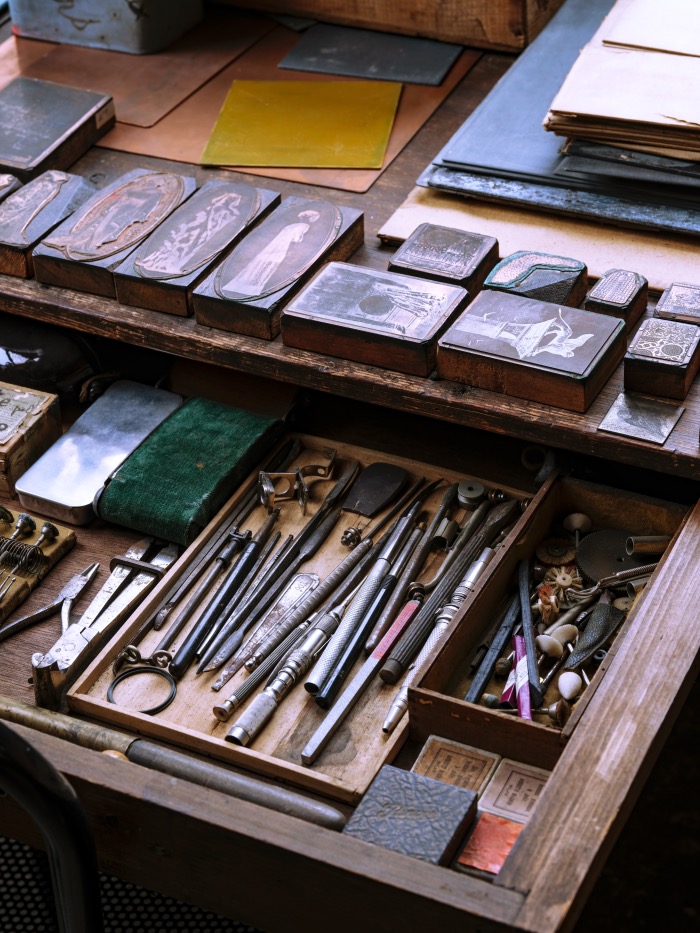 INFORMATION ON THE FORTUNY MUSEUM

Family Offer: reduced ticket for all paying members, for families consisting of two adults and at least one child (up to 14 years of age)

School Offer: €4.00 per person (valid for admission in the period from 1 September to 15 March): for classes of students of all levels accompanied by their teachers with a list of names completed by the school. The school rate is also extended to any accompanying persons (up to a maximum of 2).

HOW TO GET THERE