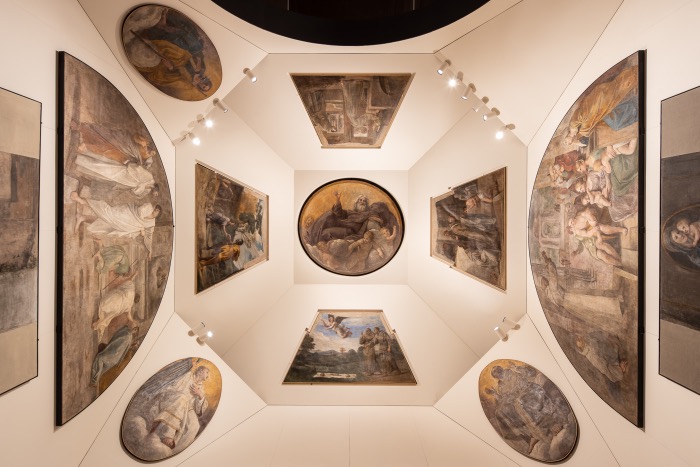 Annibale Carracci and the frescoes in the Herrera Chapel have long been considered one of the high points of 17th century art in Rome.
Between the 15th and 18th century, the church of San Giacomo degli Spagnoli in Piazza Navona was one of the most representative places for the Spanish nation in the eternal city.

In 1602, the Castilian banker Juan Enríquez de Herrera (c. 1539-1610), a leading figure in international finance at the time, had the family chapel built in the church, entrusting its decoration to Annibale Carracci.
Thus was born the master’s last great masterpiece and a challenge for art historians because it was completed by his workshop, made up of the best artists active in 17th century Rome.

Annibale Carracci and the frescoes in the Herrera Chapel 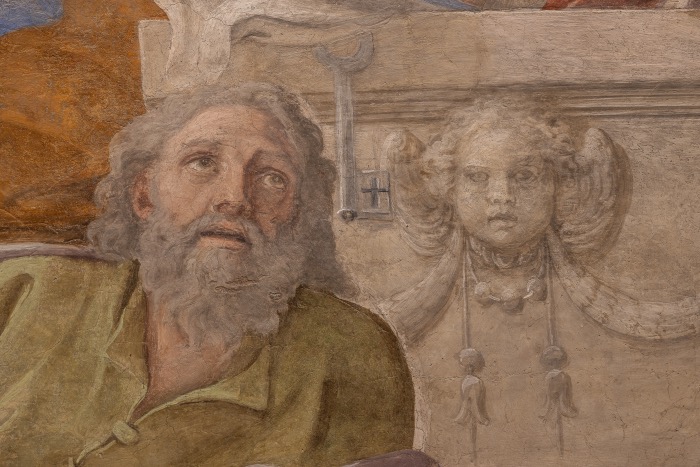 Annibale Carracci was commissioned in the early 17th century to paint a cycle of frescoes in the Herrera Chapel in San Giacomo degli spagnoli in Rome, which was admired and imitated in the 17th and 18th centuries and destroyed in 1830.
The artist had just successfully completed the frescoes in the Galleria di Palazzo Farnese and designed the whole decoration, producing the cartoons for the frescoes. However, between the end of 1604 and the beginning of 1605 Annibale was struck down by a serious illness that forced him to appoint the painter Francesco Albani as site manager.

Carracci conceived the entire cycle dedicated to the Franciscan saint Diego of Alcalá and executed some of the frescoes, until a serious illness struck him in 1605, from which he never recovered, forcing him to entrust the execution to Francesco Albani and a small group of other collaborators, including Domenichino, Giovanni Lanfranco and Sisto Badalocchio.
Carracci, with the probable intervention of helpers, also painted the altarpiece, now in a chapel in the Church of Santa Maria in Monserrato degli Spagnoli.

In the 19th century the chapel was dismantled and in 1830 the frescoes were detached, transferred to canvas and taken to the Church of Santa Maria in Monserrato degli Spagnoli. Shortly afterwards they were sent to Spain and divided between the Prado Museum in Madrid and the Royal Catalan Academy of Fine Arts in Sant Jordi in Barcelona.

Seven fragments are currently kept in Madrid, in the Prado Museum, and nine in Barcelona in the Museu Nacional d’Art de Catalunya (MNAC). The location of the remaining three fragments of decoration, which were apparently deposited in the Church of Santa Maria in Monserrato degli Spagnoli, remains unknown. 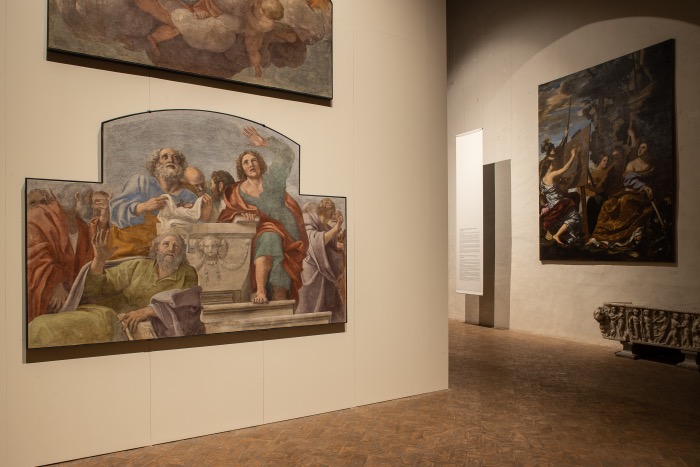 The church and hospital of San Giacomo was the centre of the Spanish community in Rome, known for the ceremonies and festivities, both secular and religious, held in Piazza Navona. Births and funerals of Spanish royals were celebrated here.

One of the first Renaissance churches built in Rome, San Giacomo originally faced Via della Sapienza, today’s Corso Rinascimento. It was the Spanish Pope Alexander VI Borgia, in view of the Jubilee of 1500, who ordered the extension of the nave and the construction of a new façade overlooking Piazza Navona. Its external appearance is known thanks to numerous depictions, including the famous View of Piazza Navona that Gaspar Van Wittel replicated several times between 1688 and 1721.

From the second half of the 18th century, in parallel with the political decline of Spain, the Iberian community shrank and the church began to deteriorate, and in the early 19th century, almost in ruins, it was closed to worship. With the urban redevelopment of 1936 and the opening of Corso Rinascimento, San Giacomo was shortened by one bay and the old Herrera chapel, now stripped of all decoration, became the entrance to the new sacristy.
The consequence of the church’s deterioration was the dismantling of Carracci’s fresco cycle.

THE DECORATION OF THE HERRERA CHAPEL (1604-1605) BY ANNIBALE CARRACCI

In 1602, the banker Juan Enríquez de Herrera, who had moved to Rome in 1568, wanted to build a funerary chapel for himself and his heirs in the church of his country, naming it after the saint to whom he attributed the miraculous healing of his son Diego.

Diego of Alcalá, an Andalusian Franciscan who lived in the 15th century, was canonised in 1588. The iconography of the saint was completely new at the time: there were few references to his appearance and the list of his miracles was not yet fully established. The sources describe him as a simple person with a life devoid of sensational events.
In keeping with the biography of the Franciscan and the new conception of religious painting in Rome at the end of the 16th century, Annibale Carracci conceived the most important cycle dedicated to Saint Diego.

The artist established the iconography of the saint definitively: he depicted the religious man as a young man with a slender figure, depicting his modest life and the miracles he performed without emphasis. The cycle was praised by his contemporaries, and it is no coincidence that outstanding interpreters such as the Spaniards Zurbarán, Ribera and Murillo remained faithful to the iconography conceived by Hannibal, while painters from his circle, including Francesco Albani and Domenichino, made it popular in Italy.

Although the conception is by Annibale Carracci, the working method of his workshop makes it difficult to identify the different hands that contributed to the realisation of the work.
The decoration of the chapel was completed in a very short time, but Annibale fell seriously ill during its execution and had to delegate the management of the work to his trusted Francesco Albani.
Carracci died on 15 July 1609, just three years after the completion of these paintings. 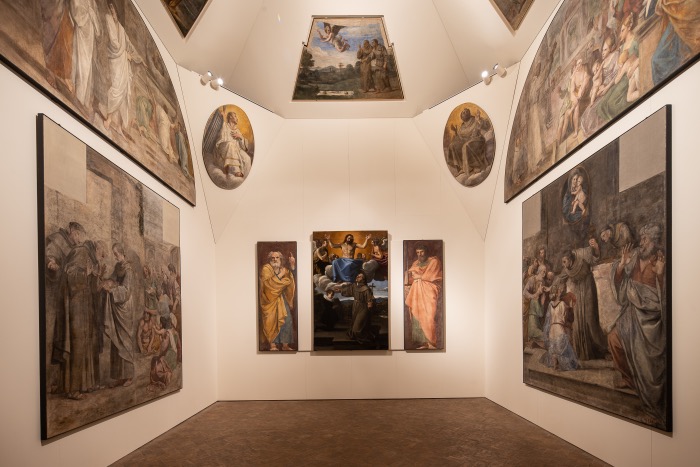 The fresco cycle was immediately considered a masterpiece but, after decades of progressive neglect, the decoration of St James of the Spaniards was dismantled in the early 19th century.
The nineteen frescoes of the Herrera Chapel were removed between 1833 and 1836 and deposited together with the altarpiece in Santa Maria in Monserrato, the other Roman church linked to the Spanish crown.

In 1850, the frescoes were transferred onto canvas and sent to Spain and divided between Barcelona and Madrid.
Today, nine are kept in the Museu Nacional d’Art de Catalunya and seven in the Prado Museum. The altarpiece remains in the church of Santa Maria in Monserrato, while the location of three frescoes is unknown.

The National Galleries of Ancient Art present from 17 November 2022 to 5 February 2023 at Palazzo Barberini (Rome) the exhibition Annibale Carracci. The frescoes of the Herrera Chapel, curated by Andrés Úbeda de los Cobos, Deputy Director of the Prado Museum, and organised with the Museo Nacional del Prado and the Museu Nacional d’Art de Catalunya.

Book your entrance to Palazzo Barberini to visit the exhibition.

The exhibition brings together for the first time the frescoes and altarpiece that made up the decoration for the Herrera Chapel in the Church of San Giacomo degli Spagnoli in Rome: an extraordinary cycle, but above all the great unknown work by Annibale Carracci.

The exhibition, which has had two previous stops, at the Museo del Prado in Madrid and the Museu Nacional d’Art de Catalunya in Barcelona, brings together the cycle of frescoes designed by Annibale Carracci for the decoration of the family chapel of Spanish banker Juan Enriquez de Herrera in the Church of San Giacomo degli Spagnoli in Piazza Navona.