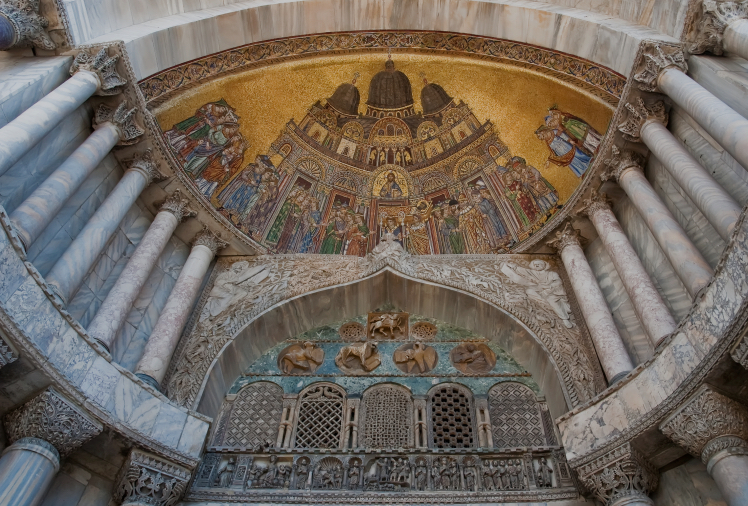 The Basilica of Saint Mark

A visit to the Basilica of Saint Mark is always included in your tourist itinerary, even though you stay in Venice only one day.
The Basilica of Saint Mark is an oriental building with domes and golden decorations which lies between the Doge’s Palace and the Saint Mark’s Campanile (Bell Tower).
It is the main church in Venice, the seat of the Patriarch of Venice, and one of the symbols of Italy in the world.

The building is the result of various constructions which succeeded during the centuries. In fact this place has always been a church, but when Venice became one of the most powerful cities in the world, the building was very rich in artistic treasures and marvels. 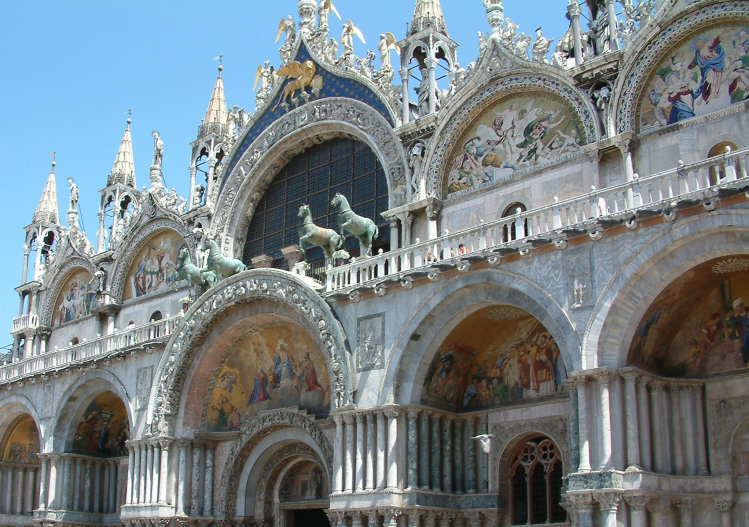 Originally the church was the chapel of the Doge, who lived in the adjacent Doge’s Palace together with his family, and it was dedicated to Saint Theodore. However, when two Venetian merchants in 820 AD stole the body of Saint Mark from Alexandria (Egypt) to bring it to Venice, the Doge of that time, Giustiniano Partecipazio, decided to build a church to keep the relics of the Saint. The first core of the future Basilica of Saint Mark was born.
Over the centuries, reconstructions, fires and modifications succeeded. The building we can see now belongs to the 1063 reconstruction, which suggested the Greek cross plan and the architecture based on Constantine’s Church of the Holy Apostles in Constantinople (now Istanbul, Turkey). (The church was destroyed after the Ottoman conquest of Constantinople in 1453).

The Basilica of Saint Mark has a Greek cross plan with five domes and an entrance door which resembles oriental arches. All the decorations, columns, marbles and sculptures seem to be out of place in Venice. But we have to remember the close economic and political relationship between Venice and the East, and artists knew very well techniques and styles used in apparently distant countries, which actually were very close to a sea power as Venice, a sort of “neighbours”

The facade of the church with its mosaics, bas-reliefs and several decorations coming from the Venetian conquests during the Crusades belongs to the 13th century.
Strange as it may seem, there are four horses (a quadriga) installed on the balcony above the portal of the Basilica.

They were sent back to Venice as part of the loot sacked from Constantinople in the Fourth Crusade. The original have been kept in Saint Mark’s Museum inside the Basilica, whereas the horses now on the facade are replicas. The sculptures are the symbols of the power of Venice, and were installed on the balcony so that everybody, citizens and kings from all over the world, could admire the military, maritime and political power of the City. The horses prove that Venice was so powerful that could show the conquest of an important city, for example Constantinople, through the symbols of that city.

Looking at the facade, on the right side towards the Doge’s Palace you can notice a porphyry statue representing four characters, the Tetrarchs. The sculpture belongs to the 2nd century AD and comes from the conquest of Constantinople during the Fourth Crusade. It represents two Caesars (junior emperors) and two Augusti (senior emperors) of the Western and Eastern Roman Empire.
Rather near the Tetrarchs, you can notice some columns which seem to be placed in an unusual position and seem to be almost temporary, as they could be moved at any time. They are the so-called “Pilastri acritani” (“Pillars of Acre”), stolen from the Church of Saint Polyeuctus (Constantinople), and placed there with the aim of showing where Venice could arrive with its army.

The exterior of the Basilica of Saint Mark was made to amaze and intimidate princes, kings and ambassadors coming to Venice (but it takes our breath away, as well!), whereas the interior of the church is spectacular.
But I will tell you in another post : ) 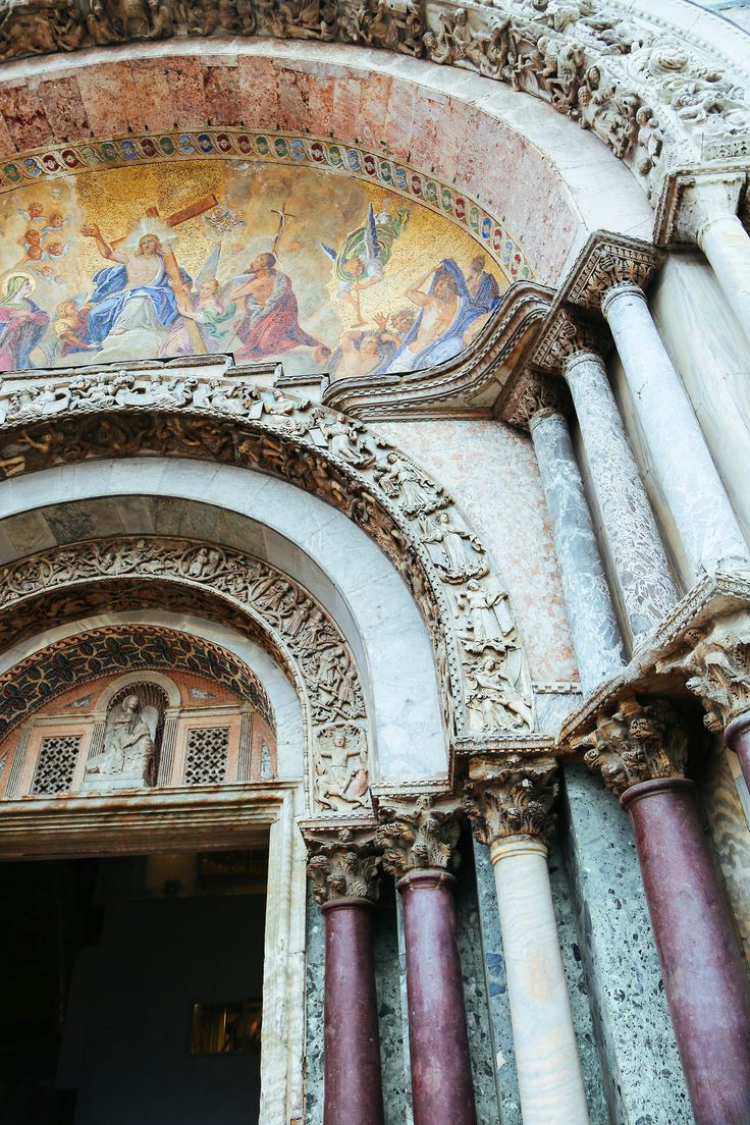 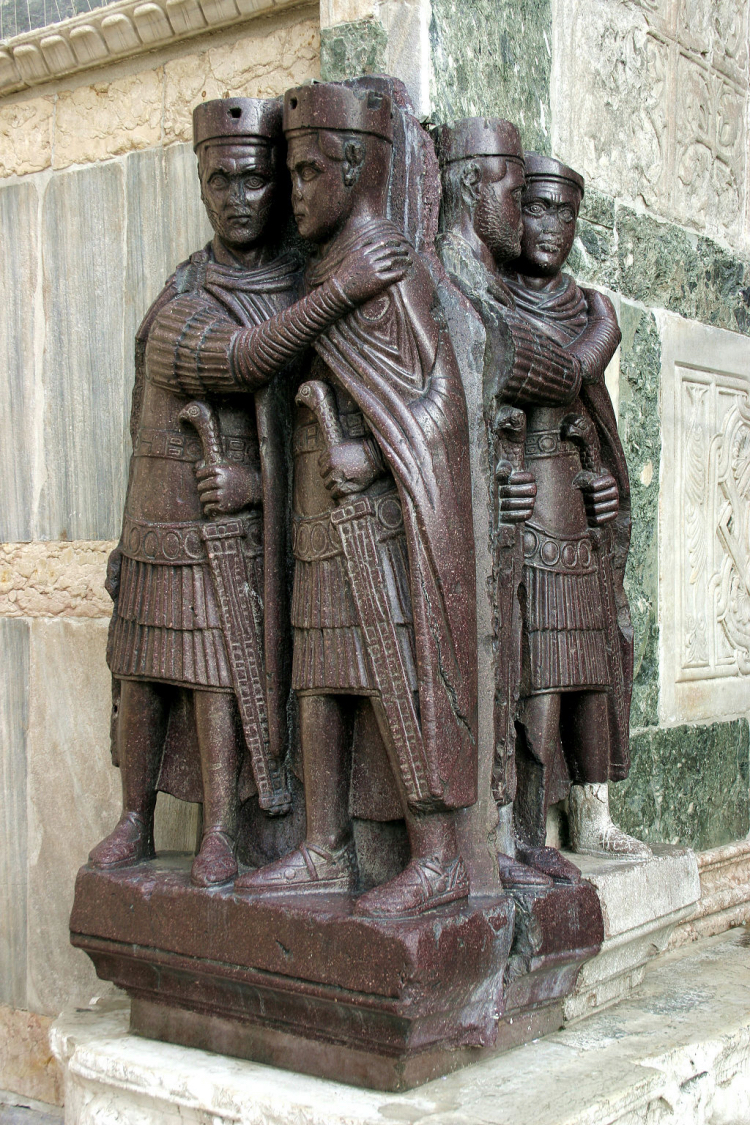