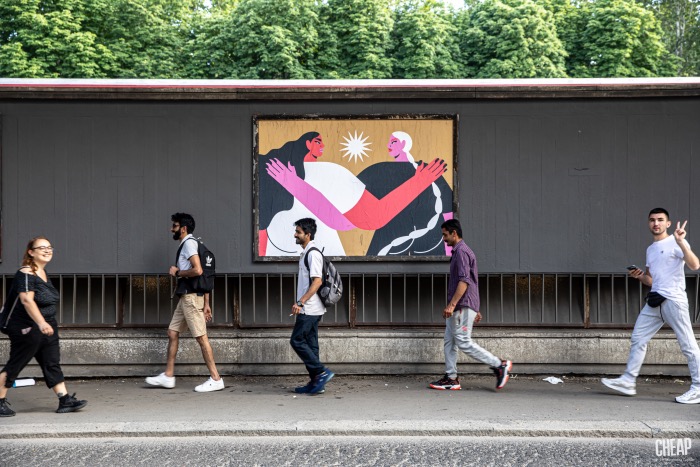 If you go to Bologna, pass by the bus station and observe the works of CHEAP street poster art, a public art project, a collective, a non-objective gaze.

Founded in Bologna in 2013 from the creative understanding and determination of 6 women, CHEAP has curated and realised paper-based public art interventions: paste-up, i.e. the use of paper and glue, is both the technique investigated by the project and a declaration of intent in terms of dedication to the ephemeral and research of the contemporary as temporary.

CHEAP now brings a new public art intervention on the street: TACI, or rather PARLIAMO
From 10 June until the end of September 2022, 50 new posters will mark the 250 square metre wall of the Bologna bus station in Viale Masini. 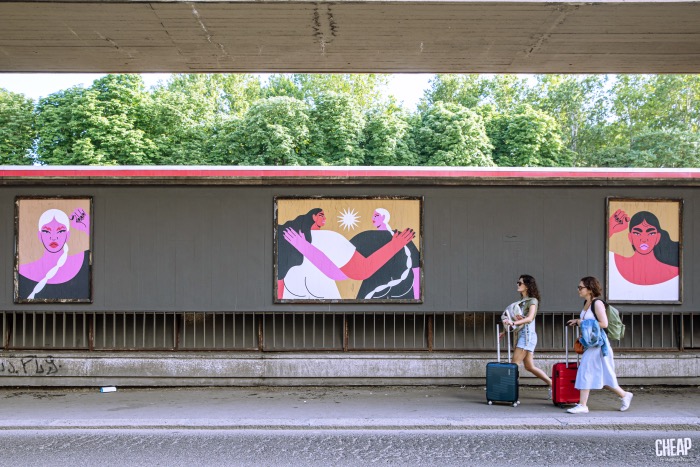 TACI, or rather PARLIAMO is CHEAP’s new public art project: the Bologna-based collective returns to the streets with a poster installation.

On the 250 square metres and 50 notice boards of the wall of the bus station in Viale Masini, one of the busiest and most travelled segments of the city, the posters and unpublished paste-ups of a selected number of visual artists, with disparate biographies and paths but recomposed within a public discourse that proposes feminism as a solution, make room.
Photography, illustration, vector graphics, street poster pasting and comics coexist in the collective intervention curated by CHEAP, producing a reappraisal not only of urban space but also of the public imagination, as has been the consolidated practice over the years.

CHEAP began as a street poster art festival, an experience it repeated for five editions before changing format and choosing to become a permanent workshop and thus changing into a more fluid, situationist and edgy experience.
CHEAP worked on the urban landscape of Bologna with international street artists before moving on to Rome, Padua, Parma and Modena.
In addition to posters, CHEAP has an official website, signs creative projects and installations, and is present in Italian Art Academies and Universities with workshops and lectures.

CHEAP’s public art projects have always focused on combating sexism and rape culture, as well as gender-based violence, denouncing the new forms of precarity and poverty to which women are exposed and the racism to which women from remote corners of the world are subjected.
There is the whole feminine universe in CHEAP’s works in the context of public space and through the medium of contemporary visual languages.

Photography, graphic design, lettering, illustration and the visual arts are CHEAP’s tools, with which it has constructed an imaginary of protest and claims, implementing a re-appropriation not only within urban public space but also within local and national public discourse.

“As we grapple with the issue of gender-based violence and its effects on rationalised bodies as well as the LGBTQI+ community, it is clear to us what political, cultural and educational perspective intersects with a real response: it is feminism, that is our solution,” CHEAP declares. “In the layering of the posters, in the routine of this street practice, there is all the urgency of feminism lived as an everyday action: something that is here and is here today, something that can be touched, definitely something that can be pasted.”

It is precisely the revival of this imaginary in a positive way that is the mission of TACI, or rather PARLIAMO: through the creation and posting on the street of 50 original, unpublished posters, CHEAP produces a public art intervention centred on feminist empowerment, to claim full citizenship, self-determination of bodies and futures, the right to the city and a feminist design and political idea of urban space.

In addition to the public art intervention, the project includes a series of workshops in schools on feminist practice of urban re-appropriation and a series of podcasts in collaboration with NEU Radio.
From April to September, CHEAP has also planned a public programme of talks: the proposal of meetings started from the history of feminist spaces born against gender violence and homolesbotransphobia, continued with the systemic connections between sexism and racism, gave space to a discussion on an idea of citizenship as equal rights that starts from the political laboratories that are potentially our cities, tested architects and philosophers in imagining a feminist city, a more just city.