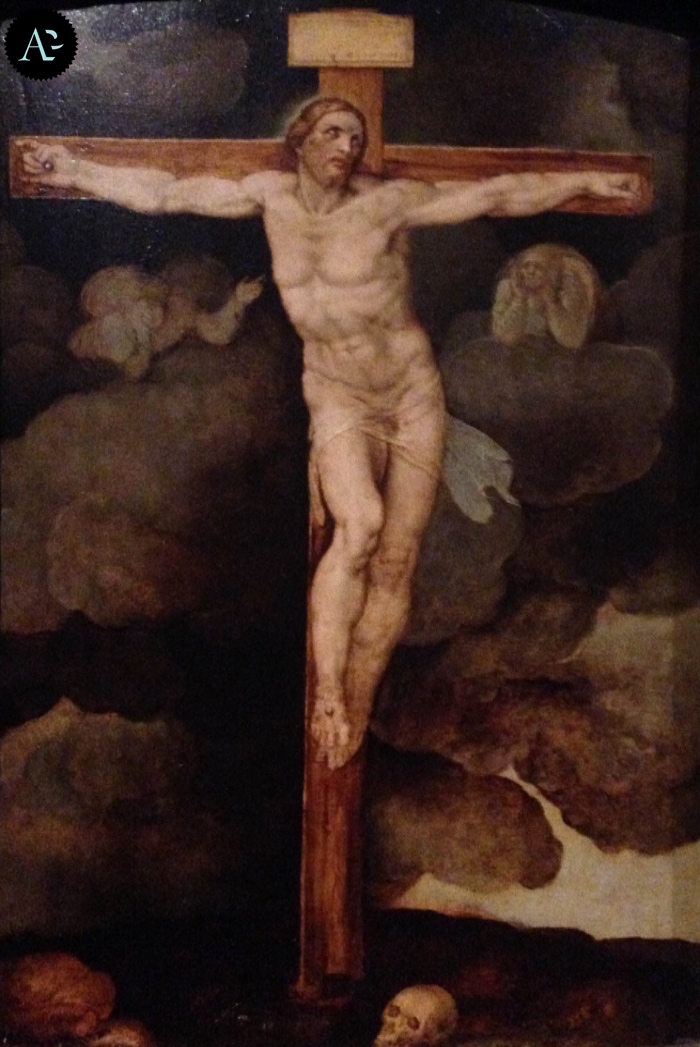 The Crucifixion for Vittoria Colonna. There’s a work by Michelangelo nobody has ever seen, but it was replicated and reinterpreted by numerous artists, who used it as a model for all the representations of the Crucifixion in which Christ is painted as the one who was capable of winning the death.
Michelangelo was the first who depicted the Crucified Christ alive, with his head upward, open eyes and in the attempt to lift from the cross. His painting was in contrast with the traditional representation of Christ suffering, with his head bent downwards otherwise in a regal and collected posture.

The British Museum in London holds a drawing of this work, considered the lost masterpiece by Michelangelo Buonarroti, or the masterpiece he never painted. It belonged to the Roman noblewoman Vittoria Colonna, and it is considered the drawing the Florentine artist himself painted and donated to the woman. 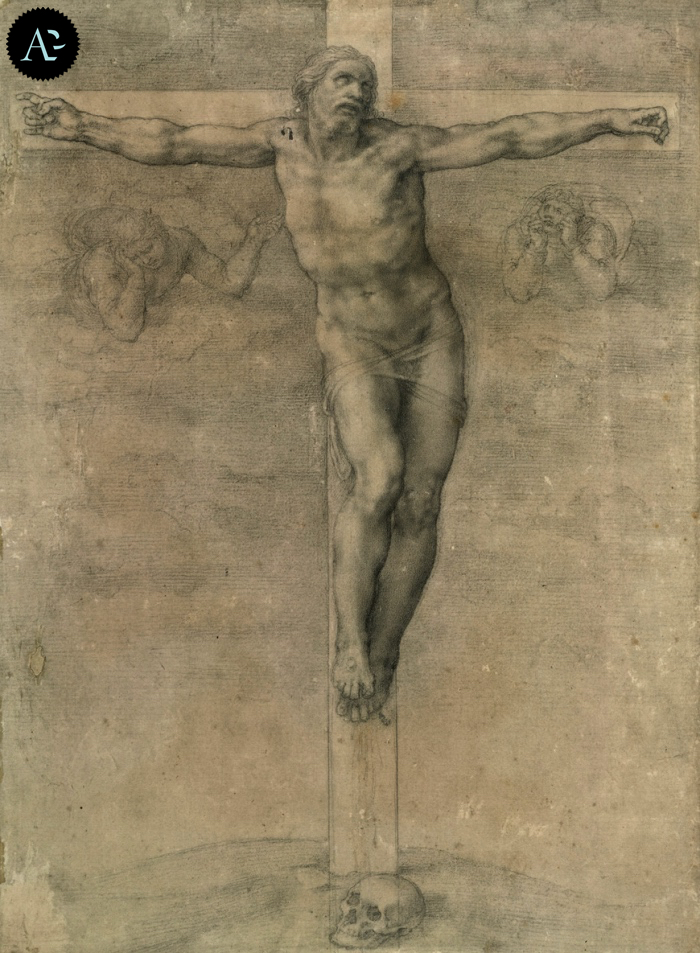 The original painting was used as a model for various artists, who reproduced numerous copies of it.
The search for this almost mythical piece of art has never stopped, and the latest, and maybe final, attempt to identify it, has been made during the exhibition devoted to El Greco in Treviso, where Professor Lionello Puppi (Professor Emeritus, University of Venice) has identified a work on display as the work by Michelangelo himself.

The thesis which attributes this Crucifixion to Michelangelo Buonarroti

Laboratory analysis and analysis of the pictorial style have been carried out, and the clues suggest that this painting is Michelangelo’s Crucifixion. The official announcement was made during a press conference held in Treviso on February 23rd 2016, but everything will be explained in a very longed-for upcoming essay.

The thesis which attributes this Crucifixion to Michelangelo Buonarroti evaluates many elements. The analysis begins from the correspondence between Michelangelo and Vittoria Colonna, which contains a lot of details that have been disclosed. For example the woman wrote that ambassadors from the Estensi court wanted to see the “sbozzo” (drawing) of the Crucifix. We don’t have Michelangelo’s answer, but we can imagine that he sent her this drawing, which corresponds to the drawing held at the British Museum.
Analyses made on the painting suggest a correspondence between the drawing and Michelangelo’s style: the absence of landscape, the presence of stormy clouds and the refined line. Besides, professor Puppi underlines that the size of the wooden board is very similar to the drawing held in London. Whereas, traces of “spolvero technique” (the technique which allows to transfer the traced design onto various surfaces) indicate that the work derives from a graphical mould (always the drawing held in London), and the x-rays analysis have revealed that the position of the skull at the base of the cross was originally on the right of the drawing, as in the painting on display.
Using Wood’s lamp (a lamp that emits short wave ultraviolet light), on the back of the work has appeared a 10-lines writing, but you can read only few words “originale il dono suo” (“his original gift”) and “di propria mano stesi” (“painted by himself”). This discovery confirms the thesis that the painting was a gift for Vittoria Colonna.

Maybe it’s too soon to affirm that, with no doubts, this piece of art is the famous painting by Michelangelo, and many theories will be explained in a very longed-for upcoming essay.