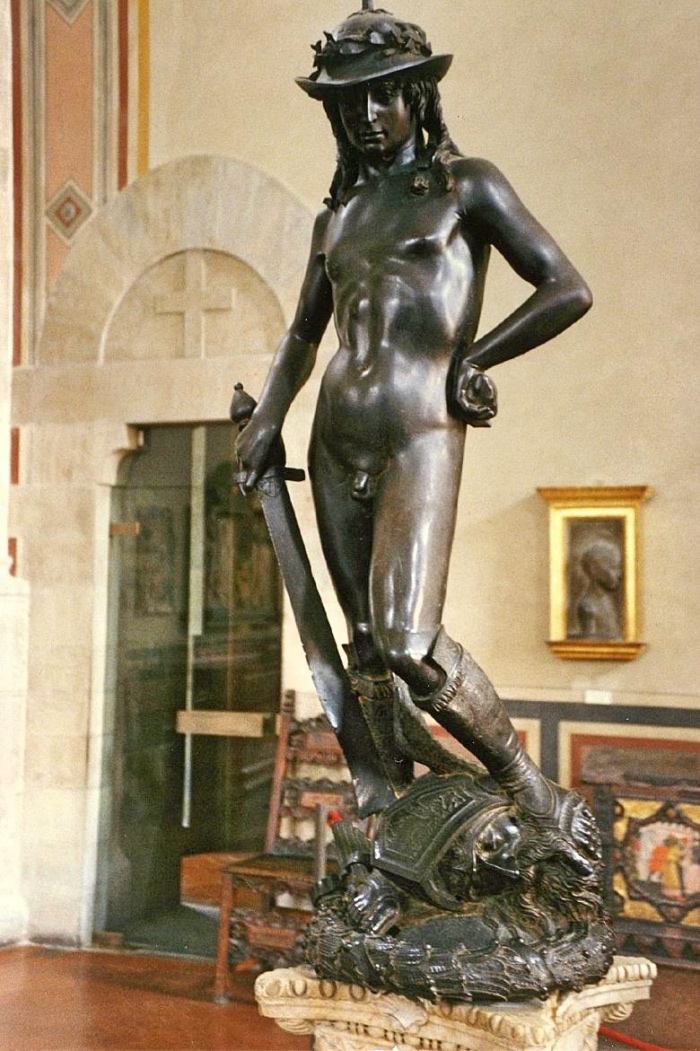 DAVID BY DONATELLO: 5 THINGS TO KNOW ABOUT THE SCULPTURE AND WHERE IT IS HOUSED

The artist who made the famous bronze sculpture is Donato di Niccolò di Bardi, known as Donatello.
Born at the end of the 14th century, he was one of the most important Renaissance artists and with David he made the first life-size nude male sculpture in the round in art history.
Not since the times of Greek and Roman classical art has a sculpture like this been seen, because large medieval statues were always created inside an architectural project. In this case, instead, the sculpture of David was conceived to be freestanding and, according the artist’s plan, who observes it has to turn around it to admire it from all angles.

WHEN AND WHY DAVID BY DONATELLO WAS MADE

David by Donatello was made in 1440 at the behest of Cosimo I de’Medici to celebrate the Battle of Anghiari, in which Florence defeated Milan.
So, the work has a political meaning, and for this reason the biblical event whose protagonist was the hero David who defeated the giant Goliath, hitting him with a stone, was chosen as the subject of the sculpture.

DESCRIPTION OF DAVID BY DONATELLO

David by Donatello is portrayed as a very young boy, while holding in his left hand the stone he hit the giant Goliath with; while in his right hand he is bearing a sword. Under his feet, instead, is Goliath’s severed head.
David is naked and is not wearing armour because his protection comes from God and he is certainly very different from the statue Michelangelo would make some decades later. For more information, read the post Michelangelo’s David: who he is and where it is.

CURIOUS FACTS ABOUT DAVID BY DONATELLO

Some details of the statue have made scholars think that David is actually the god Hermes.
In particular, his helmet with laurel leaves, the sword and the stone in his hands, the severed head under his feet are details that make us think of another story: god Hermes’s killing of Argus Panoptes at the behest of Zeus, who wanted to free nymph Io he was in love with.

WHERE DAVID BY DONATELLO IS HOUSED

David by Donatello was originally housed inside Palazzo Medici in Florence and, according to documents, we know for sure that the sculpture was there in 1469, during the marriage between Lorenzo il Magnifico and Clarice Orsini.
In 1495  David was moved to Palazzo Vecchio, and later the statue was moved other times and to different palaces until, in the second half of the 20th century, entered the collections of the Museo Nazionale del Bargello, where is now on display to the public. 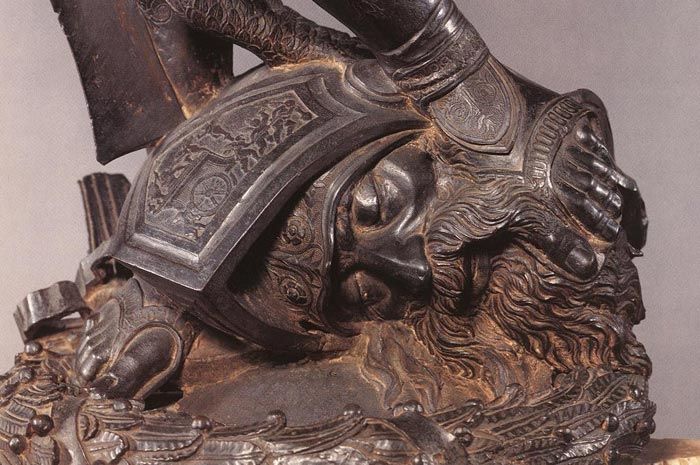 David di Donatello was created in full size (it is 158 cm high) to be placed on a high column, to admire it from below and from multiple points of view. It was the first example of an all-round nude created since the time of classical statuary.

David di Donatello originally had numerous golden details (the pommel of the sword, the leaves of the hat, the palmettes of the boots, the wings of the Goliath helmet) and, above all, he had golden blonde hair.
On very few exceptional occasions, David left Florence.
In 1930, with the transfer to the Royal Academy of Arts in London for the exhibition dedicated to Italian artistic excellence (Exhibition of Italian art: 1200–1900), or for the 1967 Expo in Montreal, when David was the absolute protagonist of the pavilion Italian in a setting specially created by Carlo Scarpa (the famous architect who created, among other works, the Olivetti Shop in Venice).

In 1887, on the occasion of the 500th anniversary of Donatello’s birth, the large Sala degli Adienze of the Palazzo del Bargello in Florence was transformed into a large exhibition hall dedicated to the master.
From that moment on, the Salone will be named after Donatello and David will become an essential element in the setting dedicated to the masterpieces of fifteenth-century sculpture.

The David di Donatello gives its name to the most important Italian film award.
In fact, the young hero of Donatello who defeats the giant Goliath is the emblem of Italian genius, creativity and stylistic perfection.
It was the jeweler Costantino Bulgari who created the gold statuette that has been delivered to the winners of the Prize since 1956 (first edition of the Prize).