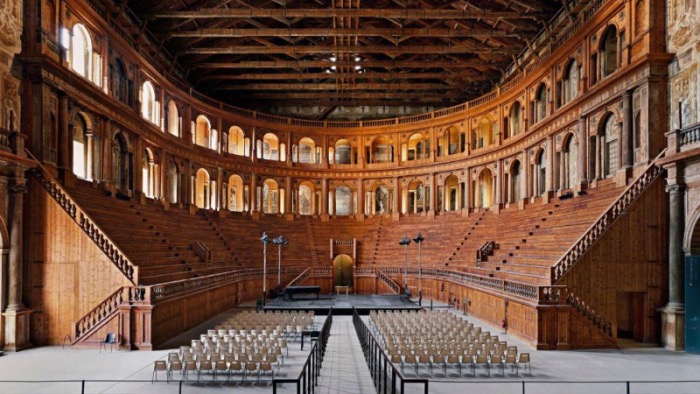 HISTORY OF THE FARNESE THEATRE AND SOME CURIOSITIES

Located on the first floor of the Palazzo della Pilotta, the story of the Farnese Theatre begins in 1618 when its construction began.
Built in a very short time, in a space that was originally a hall used for various events and for the court’s knightly exercises, it was constructed using light materials such as painted wood and stucco.

In this post I will tell you about its history and some interesting facts. 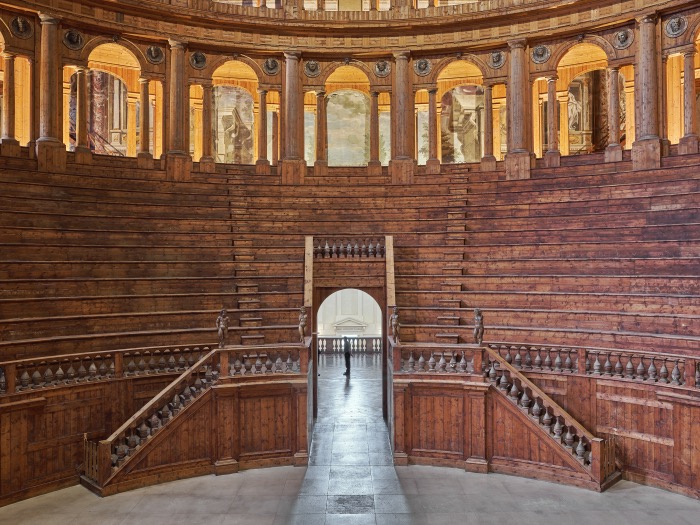 The result of an architectural research that the Italian courts had begun over a century before, the Farnese Theatre was designed by Giovan Battista Aleotti, who made it a stable space for performances.
For its construction, the architect was inspired by the Teatro Olimpico in Vicenza, which had been built by Andrea Palladio in the second half of the 16th century and was the first permanent covered theatre in the world.

The Teatro Farnese was designed, however, to amaze.
Equipped with an ingenious system for mobile scenery, the stalls could be flooded to stage naval battles.

The “horseshoe” structure of the tiers of seats, surmounted by two rows of loggias richly decorated with carvings, paintings, stuccoes and frescoes on the walls, must have been astonishing for its magnificence and size: 87 metres long, 32 metres wide and 22 metres high, it was in proportion to the ambitions of the Farnese family and a little less to the size of their court. In any case, the
Farnese Theatre was one of the characteristic elements of the complex of buildings linked to the Palazzo della Pilotta.

HISTORY OF THE FARNESE THEATRE

It was Ranuccio I who wanted the Farnese Theatre to be built to celebrate the visit of Cosimo II de’ Medici to Parma during a trip to Milan, with unprecedented pomp and circumstance.
Unfortunately, however, the trip was cancelled for health reasons and the theatre was not inaugurated until 1628, on the occasion of the wedding between Margherita de’ Medici and Duke Odoardo Farnese. On that occasion an allegorical-mythological spectacle was staged, with music by Claudio Monteverdi, and a tournament and naval battle were also organised.

The history of the Farnese Theatre is characterised by elaborate staging, complex operation of the stage machinery and a very high cost for each individual performance. For this reason, after its inauguration, the theatre was only used eight more times, from 1652 to 1732, for illustrious visits or court events.

Neglected by the Bourbons and by Maria Luigia, the Farnese Theatre was visited by travellers, artists, men of letters and princes who pointed out its conditions of progressive decay and abandonment.
Only in the mid-19th century did the first restoration work begin.

Severely damaged by the bombings that Parma suffered during World War II, the theatre was rebuilt in its wooden structure thanks to the recovery of parts that remained intact, while the original decoration with the numerous stucco statues positioned on the loggias and in the monumental architecture that simulated marble and the use of precious metals has been almost completely lost. 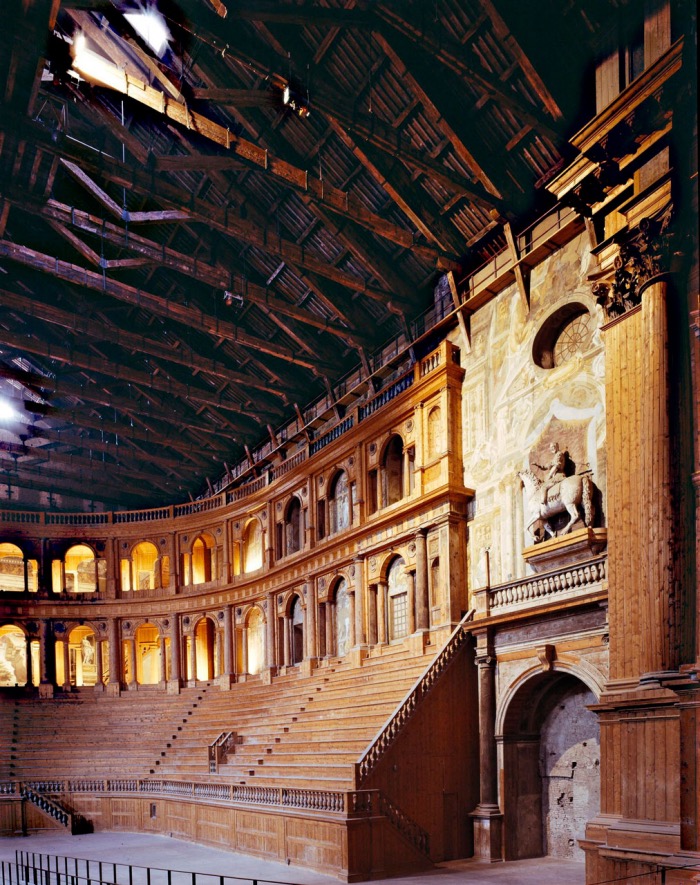 The Teatro Farnese has now returned to host theatre performances and in 2011 the first performance of the new era of the theatre took place with a concert conducted by Claudio Abbado, in the presence of 1,500 spectators.

In 2018 the 400th anniversary of its construction was celebrated and a museographic tour of the Complex was set up, including the opening of two sections (the Theatre Galleries) and preparing the recovery of the stucco and straw decorations of the hall.
The Teatro Farnese is therefore at the centre of a fundamental junction in the chronological and conceptual reconciliation of the Pilotta’s collections between the Archaeological Museum and the National Gallery.