Las Meninas by Velázquez is one of the most important masterpieces of European art.
Commissioned by the Spanish royal family, the painting displays a scene of life at court, by turning the point of view upside down and giving the viewer the feeling of participating in the scene.

Are you ready to discover the story and curiosities about this painting?
Here are 5 things to know about Las Meninas by Velázquez. 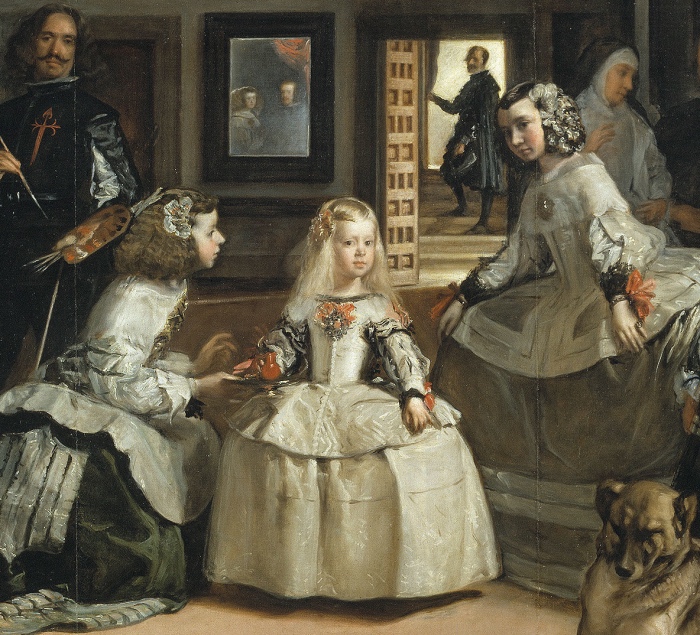 1. DESCRIPTION OF THE PAINTING LAS MENINAS BY VELÁZQUEZ

Painted in 1656, Las Meninas by Velázquez is a huge painting portraying the Infanta Margaret Theresa, surrounded by her ladies-in-waiting, while posing for the artist Diego Velázquez.
In the background are an open door and a mirror reflecting the figures of Philip IV and his wife Mariana of Austria.
The depth of the space is rendered thanks to the contrast between the light source, coming from the right, and the dark background of the room depicted.

2. WHO THE CHARACTERS PORTRAYED ARE

The composition of the work is theatrical and describes a moment of life at the Spanish court, which the viewer has the feeling to experience at first hand.
In the centre of the scene stands the daughter of the sovereigns, the Infanta Margaret, next to two ladies-in-waiting, who attend her.
The dwarfs, instead, had to distract her while posing for the painting. Behind them, is nun Marcela de Ulloa, the chaperone of the Queen’s ladies, who is talking to the court official Diego Ruiz de Azcona.
Diego Velázquez, instead, is on the left and depicts himself while painting the portrait.

3. WHY LAS MENINAS BY VELÁZQUEZ IS CALLED THAT

The painting was originally entitled “The family of Philip IV”, but soon it was entitled “Las Meninas”, the Portuguese word meaning “the two maids of honour” referring to the two ladies next to the Infanta Margaret.
The two ladies are Doña Maria Agustina de Sarmiento, portrayed while kneeling at the Infanta’s feet to offer her a jug of water, and Doña Isabel de Velasco, portrayed while curtseying.

4. WHERE LAS MENINAS BY VELÁZQUEZ WAS ORIGINALLY HOUSED AND WHERE YOU CAN SEE IT TODAY

The painting by Diego Velázquez was housed in the private apartments of Philip IV at the Alcazar in Madrid, the ancient royal palace, and in 1734 it ran the risk of being destroyed in the fire that devastated the palace.
Today Las Meninas is housed at the Prado Museum, and if you’re thinking of going to Madrid to admire the painting, you’d better read the post Prado tickets: how to buy your ticket to skip the line containing all useful tips.

Many artists were inspired and fascinated by Diego Velázquez’ s painting.
Pablo Picasso painted 58 canvases inspired by Las Meninas by Velázquez, but in Cubist style, which were donated to the Picasso Museum in Barcelona. 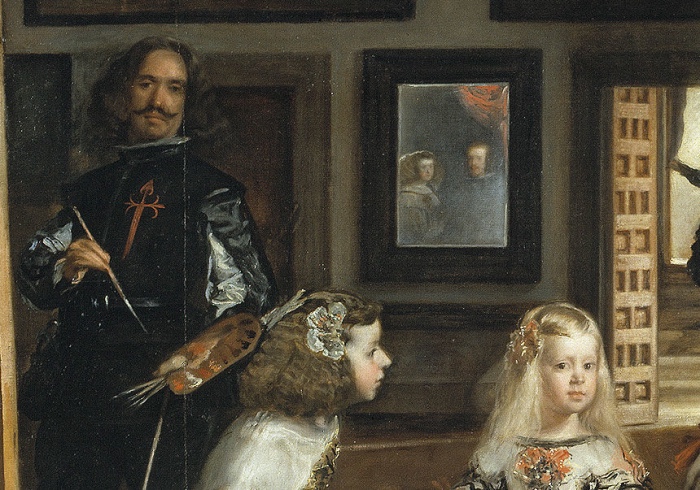 READ ALSO – Prado works: what you must see

One thought on “Las Meninas by Velázquez: 5 things to know”