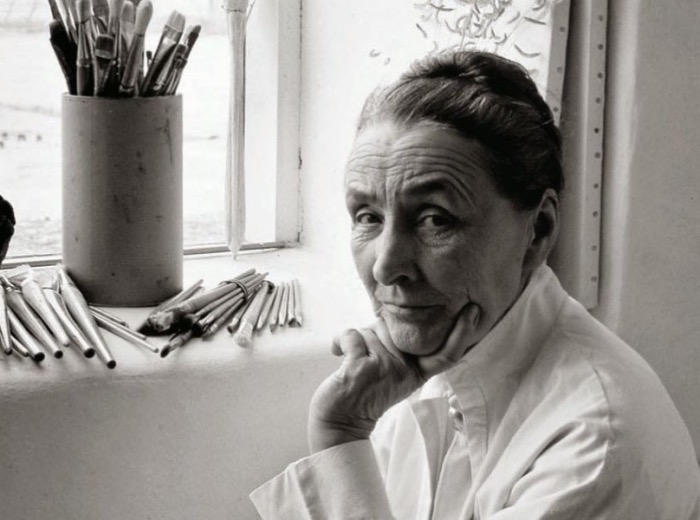 Georgia O’Keeffe’s works are grandiose representations of nature. Flowers seen from very close up, reproduced with meticulous attention to detail and which have enabled her to develop an original expressive language that oscillates between abstraction and figuration. 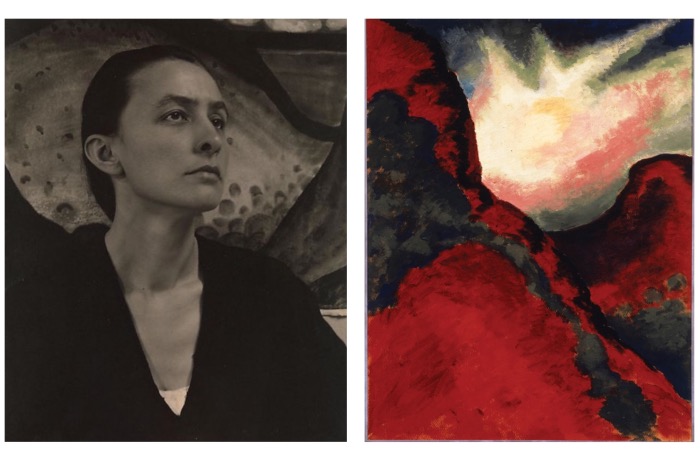 “One rarely takes the time to really observe a flower. I have painted them large enough for others to see what I see.”

This phrase by Georgia O’Keeffe, from 1926, encapsulates the artist’s artistic journey, the meaning of her works and the message she wanted to leave to the world.

Georgia O’Keeffe (1887-1986) grew up in Wisconsin, in the Midwest of the United States, and began her artistic career when she settled in Charlottesville, Virginia, and then in Canyon, Texas, where she was an art teacher for two years from 1916 to 1918.

From 1918 onwards, Georgia O’Keeffe spent crucial years in New York for her artistic development. In the metropolis, she found herself at the centre of the influential but then very fashionable circle around the photographer, art dealer and art broker Alfred Stieglitz.

Stieglitz, who became her husband, was among the first to exhibit the works of the European avant-garde and his gallery was not only a place of confrontation but also a stimulus for the birth of young art and new American photography. O’Keeffe owes the early recognition of her artistic potential and the career that followed to Stieglitz.
Despite his frequentation of the New York environment, the urban life of the big city left few visible traces in his works.

Her ties with the places of her childhood and the boundless American landscape never faded. For many years she stayed with her husband Stieglitz at his family’s holiday home on Lake George in New York State. It was here that O’Keeffe spent her summers and where an important part of her artistic production began.

In 1929, O’Keeffe also spent several weeks in New Mexico in the southwestern United States, to which she returned every year, always alone, and where she settled permanently after Stieglitz’s death.

Nature and landscape were O’Keeffe’s main sources of inspiration.
The artist painted both figuratively and abstractly, always referring to the motif of the landscape, whether it was first Lake George or, later, New Mexico. 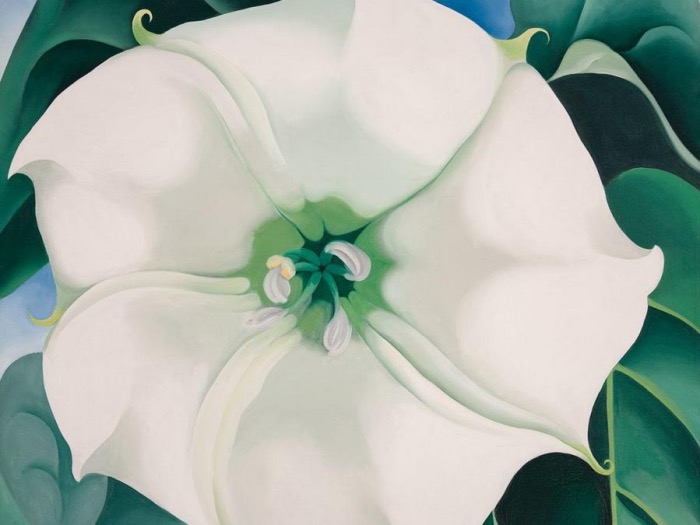 One of the few oil paintings from his early years is ‘Red Landscape’ (1916/17), in which a night sky is torn apart by a burst of light that bathes the arid hillside formations in brilliant red.

Georgia O’Keeffe’s art is largely characterised by the juxtaposition of figurative and abstract painting and it is the paintings ‘Blue and Green Music’ (1919/1921) and ‘Series I – From the Plains’ (1919) that reveal how the artist dealt with abstraction.

The plant world, in particular flowers, are the central theme in Georgia O’Keeffe’s works.

In large-format flowers such as “Jimson Weed / White Flower No. 1” (1932) or “Oriental Poppies” (1927), O’Keeffe’s familiarity with the then current trend of “Straight Photography”, the trend in the language of photography that wants to avoid any manipulation of the photograph, is evident.

Georgia O’Keeffe‘s works from her first stay in New York, including ‘Ranchos Church No. 1’ (1929) and ‘Gray Cross with Blue’ (1929) are inspired by architectural forms and elements typical of this region. Also from this period is ‘Mule’s Skull with Pink Poinsettias’ (1936), one of the many paintings O’Keeffe made inspired by animal skulls found in the desert.

During the war years, when O’Keeffe was living permanently in New Mexico, her way of looking at this landscape changed. In the two series “Black Place I-IV” (1944) and “Black Place I-III” (1945) she resorted to a dark palette to render the hilly landscape black-grey. Her painting now tended more and more towards the abstract, favouring a bird’s-eye perspective. Even the still life ‘It Was a Man and a Pot’ of 1942, depicting a human skull, suggests that O’Keeffe perceived the world in the 1940s to be increasingly conditioned by the events of the war.

While still alive, Georgia O’Keeffe was considered in the United States to be an important representative and co-founder of the new American art that had been spreading since the late 1910s in parallel with and in opposition to the European avant-garde.

In 1943, the Art Institute of Chicago held her first museum retrospective; in 1946, the Museum of Modern Art in New York dedicated a major exhibition to her, the first ever devoted to a woman painter.

Most of Georgia O’Keeffe’s works are held in the United States, in more than 100 public and private collections. In Europe, however, there are only a dozen works in private and public collections.

Georgia O’Keeffe only travelled to Europe for the first time in 1953, at the age of 65.

Despite an eye problem, the artist continued to draw until the end, working in pencil and charcoal until 1984. She died on 6 March 1986 and his ashes were scattered over Pedernal, New Mexico.

Georgia O’Keeffe was the first woman to have a retrospective at the Museum of Modern Art in New York in 1946. However, in Europe, the first major exhibition of the painter’s work took place after her death in 1993 at the Hayward Gallery in London. 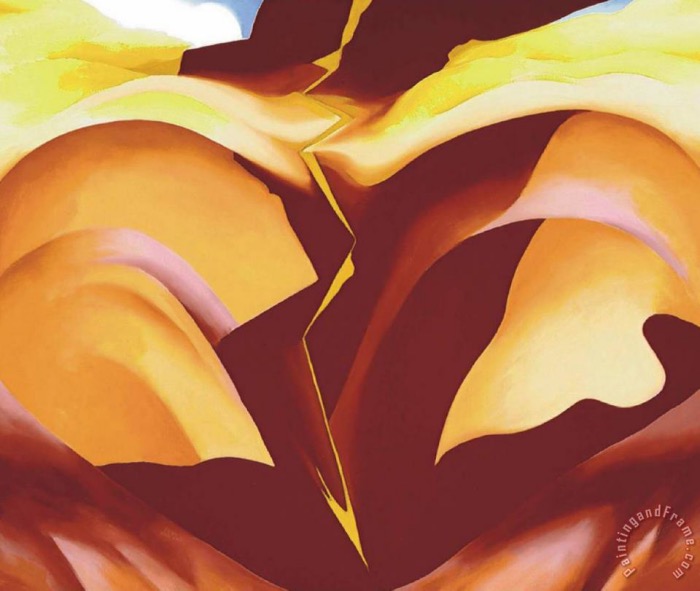 WORKS BY GEORGIA O’KEEFFE ON DISPLAY AT THE BEYELER FOUNDATION

From 23 January to 22 May 2022, Georgia O’Keeffe’s works are on display at the Fondation Beyeler, Basel (Switzerland).

On display are 85 works from public and private collections, providing an insight into the work and life of Georgia O’Keeffe. For the European public, this exhibition is a rare opportunity to see the artist’s major works.
It is one of the exhibitions to see in Europe in 2022 because it is a rare opportunity to admire the main works of the artist in the old continent.

The Fondation Beyeler exhibition presents O’Keeffe’s early works, created while he was teaching in Virginia and Texas, and a selection of later works.
Charcoal drawings, a selection of small-format watercolours and one of the few oil paintings from the artist’s early period of artistic production. A painting in which the night sky is ripped open by a spectacular burst of light that bathes the arid hillside formations in brilliant red.

2 thoughts on “Life, curiosities and works of Georgia O’Keeffe”