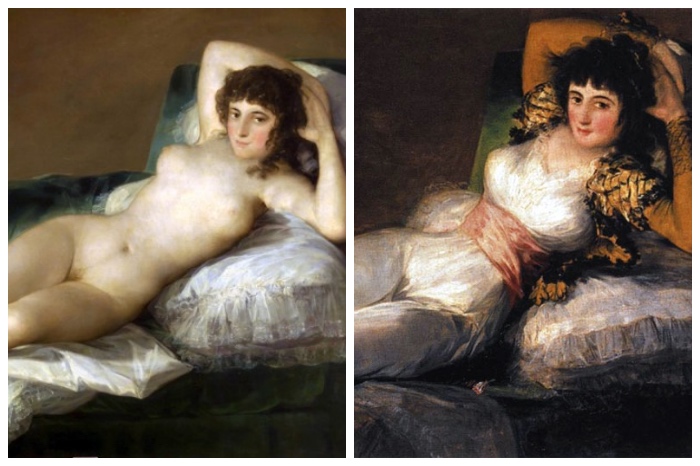 THE MAJA DESNUDA AND THE MAJA VESTIDA: 5 THINGS TO KNOW AND WHO THE WOMAN PORTRAYED BY GOYA IS

Why are the Maja desnuda and the Maja vestida so famous? What makes these two paintings so appealing?
The answer to these questions is in their story which holds more mysteries than certainties.

In this post I’ ll lead you to the discovery of the Maja desnuda and the Maja vestida, by describing these two canvasses in 5 points, and I hope you’ ll feel the desire to admire them in person.

The Maja desnuda and the Maja vestida: 5 things to know

1. WHEN GOYA PAINTED THE MAJA DESNUDA AND THE MAJA VESTIDA

Around 1800 Francisco Goya painted a beautiful woman lying on a bed covered with big pillows. But he portrayed her twice and in the same position, but in a painting the woman is nude (Maja desnuda), whereas in the other is clothed (Maja vestida).
These paintings caused scandal and aroused great curiosity, so they are considered among the most famous paintings in Spanish art.

2. WHO COMMISSIONED THE MAJA DESNUDA AND THE MAJA VESTIDA

3. THE MAJA DESNUDA AND THE MAJA VESTIDA: WHO THE WOMAN PORTRAYED IS

Several hypotheses about the identity of the woman portrayed have been put forward, and even in this case no documents can confirm the various theories that have been formulated over the time.
The famous hypothesis that Goya painted Maria Teresa Cayetana, Duchess of Alba during his stay in the residence of the noblewoman in 1797 is just a theory.
However, in 1868 Mariano Goya, the artist’ s grandson, revealed to the painter Luis de Madrazo that the model depicted in the two paintings was the mistress of a friend of Goya.

4. THE BEAUTY OF THE MAJA DESNUDA AND THE MAJA VESTIDA

The horizontal format of the two canvasses let Goya depict, in both cases, the woman from a close point of view.
Light spreads in a harmonious way on the clothed and nude body, illuminating the fabrics and making the woman’ s pale skin stand out.
The shape of the nude legs is highlighted by a dim light and the pillows seem to be really soft.

5. THE MAJA DESNUDA AND THE MAJA VESTIDA: THE SCANDAL OVER THE NUDE

The Maja desnuda and the Maja vestida are sensual works and show the image of a bold woman.
Although it was confirmed that the canvas portraying the Maja desnuda was hidden by the clothed version, it caused many problems to the artist, and in fact in 1808 his works were confiscated.
The problem was not the nude, but the fact that there were no allegorical or mythological pretexts that could justify the portrait of a woman completely nude, and in Spain the depiction of the nude was tolerated only if linked to mythological themes and that could convey a moral teaching.

READ ALSO – Prado works: what you must see 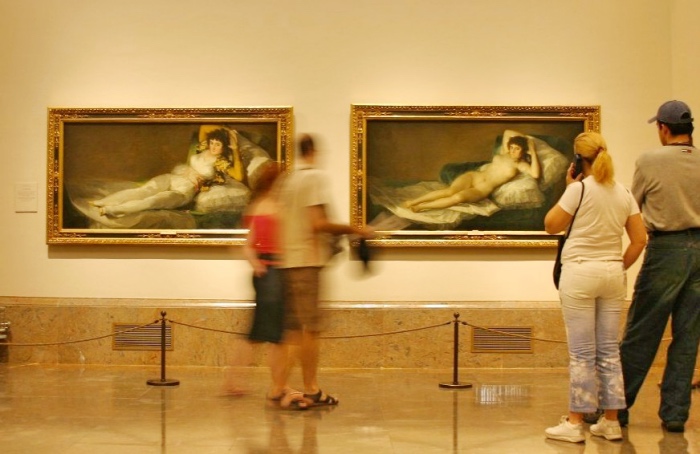 READ ALSO – Prado tickets: how to buy your ticket to skip the line