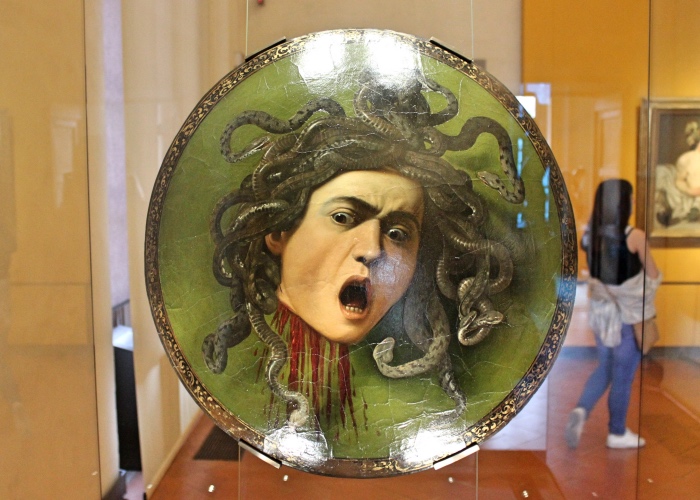 MEDUSA BY CARAVAGGIO: WHERE IT IS HOUSED AND ITS MEANING

Medusa by Caravaggio is splatter!
I do believe that if he had lived nowadays, Caravaggio would have become a film director like Quentin Tarantino, and those who saw “Pulp Fiction” and similar movies, know what I’m talking about.

Medusa by Caravaggio is characterized by a shocked gaze, a terrified scream, a snarl of living snakes in place of hair, a river of blood streaming out of a decapitated head.
Medusa is hypnotic and terrifying.
Here is where you can admire it and which its meaning is.

To be honest, I wouldn’t like to have Medusa by Caravaggioin my hypothetical collection of works of art, maybe hanging on a wall in my living room.

Medusa by Caravaggio is a monster from Greek mythology, one of the three Gorgon sisters, whom was beheaded by the hero Perseus before her gaze turned him to stone. Perseus was cunning and used a shield as a mirror so that Medusa was paralyzed by her own reflection. This way he could defeat her.

So, Caravaggio painted this masterpiece on a shield and the image we see is Medusa while meeting her own gaze, leaving Perseus the chance to strike the fatal blow.
Obviously, the shield on which Medusa by Caravaggio is painted isn’t a real shield, because Caravaggio was commissioned the painting by Cardinal del Monte (Caravaggio’s sponsor and generous patron) to give it as a gift to Ferdinando I de’ Medici, the Grand Duke of Tuscany, in 1598.
They have a political relationship, in fact Cardinal del Monte was the Grand Duke’s ambassador in Rome and the painting enriched the Grand Duke’s collection of weapons.

In all likelihood, the subject of Medusa was deeply loved by the Grand Duke, because in the early 16th century the presence of a Medusa painted by Leonardo was detected in his collection.

MEDUSA BY CARAVAGGIO: WHERE YOU CAN SEE IT

Medusa by Caravaggioremained in the collection of weapons of the Grand Duke of Tuscany Ferdinando I de’ Medici until the 18thcentury, when the contents of thearmourywas sold, except for this work.
The painting in now housed and displayed in the Uffizi Gallery in Florence.

To visit the Uffizi I suggest you book the ticket using this link –> Uffizi Skip the Line Tickets and Tours or you can use the link –> Uffizi priority entrance. 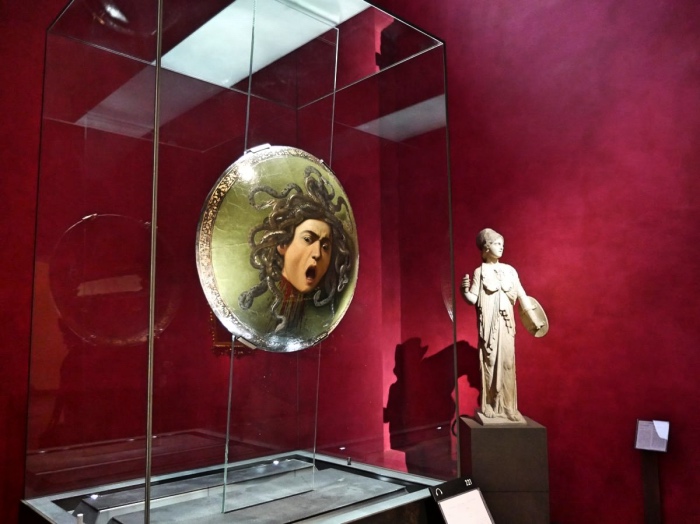 One thought on “Medusa by Caravaggio: where it is housed and its meaning”