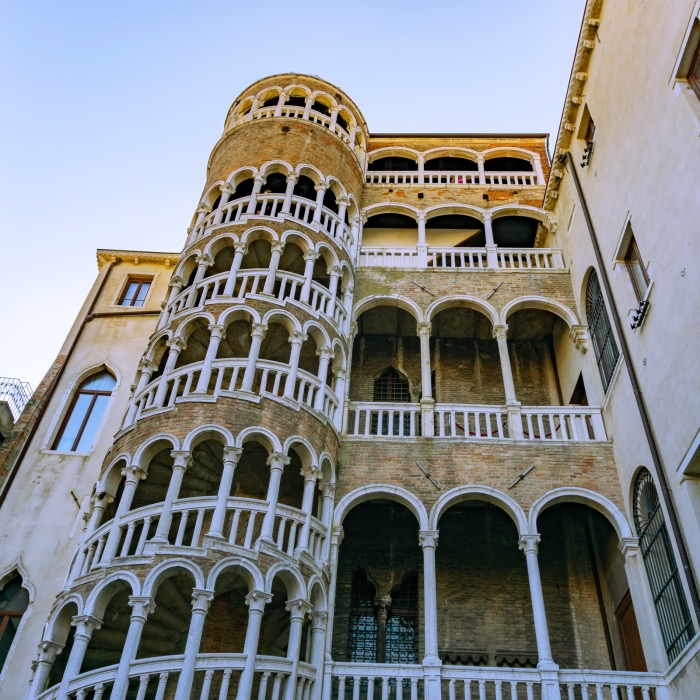 PALAZZO CONTARINI DEL BOVOLO TICKETS, THE STAIRCASE AND THE WORKS TO SEE

If you want to book tickets to Palazzo Contarini del Bovolo and climb its famous spiral staircase, you’ve come to the right place.
It is one of the most Instagrammable places in Venice and in this post you will find all the information you need to visit this late Gothic palace, which is located a few steps away from the Rialto Bridge.

You can book tickets for Scala Contarini del Bovolo now, but in the meantime I’ll leave you with some useful information for your visit.

The Scala Contarini del Bovolo is a unique spiral staircase (bòvolo in Venetian dialect) that externally characterises the late Gothic palace of the same name. During its long existence the palace, whose vicissitudes span five centuries of Venetian history, has known different owners.

Palazzo Contarini del Bovolo is a late Gothic building located a few steps from the Rialto.
Its peculiarity is the spiral staircase that was built at the end of the 15th century and gave the palace its name. In fact, ‘bòvolo’ means ‘spiral’ in Venetian dialect.

It was Pietro Contarini, scion of the rich Contarini family, who wanted the palace, entrusting the architect Giovanni Candi with the project.
The palace then went through various vicissitudes and knew other owners, but that bizarre and fascinating staircase, built in 1499, has remained as a testimony to the wealth of artistic influences in Venice during the Renaissance.

Select a date and book tickets for your visit.

The staircase is 26 metres high and provides access to the loggias on the four floors of the palace.
Those who climb to the top can admire Venice from a different viewpoint and embrace Venice with their gaze.

Scala Contarini del Bovolo reminds us of the spread of a new Renaissance taste in Venice during the Renaissance, different from the Gothic that had shaped Venice’s appearance.
Tuscan craftsmen were hired to complete this project and allow the creation of something unique in the city.

The sequence of superimposed loggias resolves the connecting element between the tower and the adjacent palace, which has four floors – in addition to the ground floor – and is the result of the fusion of two building bodies: a trapezoidal block built around a central courtyard (the oldest nucleus), to which a rectangular-plan body was added. 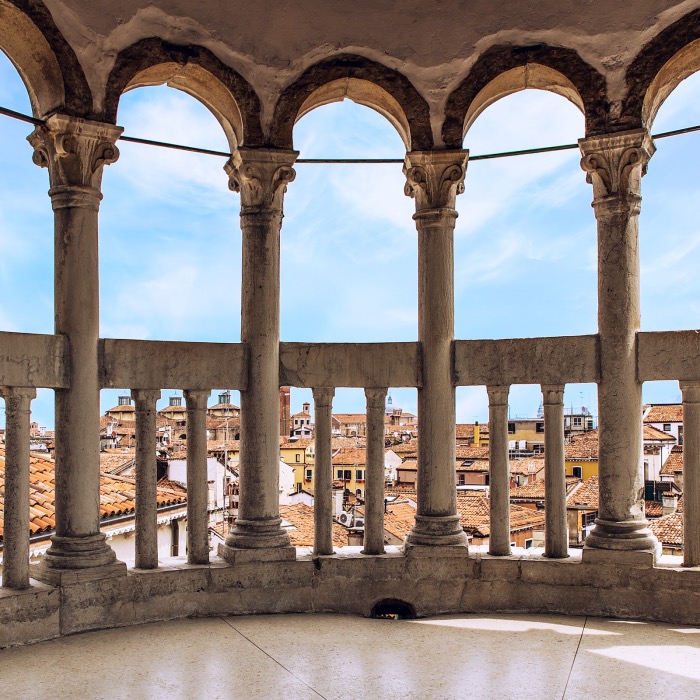 THE WORKS: WHAT TO SEE AT PALAZZO CONTARINI DEL BOVOLO

In addition to the staircase, it is possible to visit a collection of works of art by accessing the loggia on the second floor.
This is the Tintoretto Room, which houses the sketch Tintoretto made before he painted Paradise, the majestic painting inside the Doge’s Palace in Venice.

THE LEGENDS OF THE CONTARINI DEL BOVOLO STAIRCASE

The staircase was built after the construction of the palace and actually had no practical reason. It had only been created to embellish the building!
Precisely because there was no valid reason for building it, fanciful stories began to circulate in Venice as to why it had been built.

Some said that the owner of Palazzo Contarini del Bovolo, a great gambler, had lost all his money and in order to pay off his debts he had sold the palace, keeping only the top floor for himself and had the external staircase built to access his flat.
Others thought that the owner was a libertine and that he had the staircase built so that his mistresses could enter and leave the palace without being seen or heard by his wife.

It has never been discovered whether these stories were true or gossip, the fact remains that today we can admire and climb to the top of this architectural masterpiece.