Van Gogh’s works have become great masterpieces of history of art only after the death of the artist.
The life of Van Gogh is the most interesting example of a misunderstood genius, because almost nobody knew his talent when he was still alive and nobody recognized in his brushstrokes the major impact which would have on next generations of artists.

There are several Van Gogh’s works to know but some are unmissable. Among Van Gogh’s works this one depicts a place beloved by the artist.
The artist had moved to Provence, enchanted by the colours and nature of southern France, hoping that he could find serenity, and this was one of the places frequented by the painter, who was fascinated by the lights and shadows emanating from this café.
The work is important not only because there are vivid and strong colours typical of Van Gogh’s artistic maturity, but also because this is the first painting in which he used starry background, a theme that would be central in other next painting. Little time after having painted “Café Terrace at Night”, Van Gogh began painting the night and created what is considered one of his most important masterpieces:“Starry night over the Rhone”.
It’s a painting characterized by dark shades and which plays with the glare of the light of the stars and the nearby town. Van Gogh was in Provence when he made this painting, which is now part of the collection of works of the Kröller-Müller Museum in Otterlo.
The landscape is typical of autumnal Provence, which fascinated van Gogh so much and where the sun seems to be the starting point for the vital energy that spreads everywhere.

This work was created in a happy period in the artist’s life, a particularly creative period in which, as he himself wrote to his brother Theo, he painted tirelessly. To find out more about this painting, I wrote an in-depth study entitled Pollard Willows at Sunset by van Gogh: description and curious facts, where you can learn more. 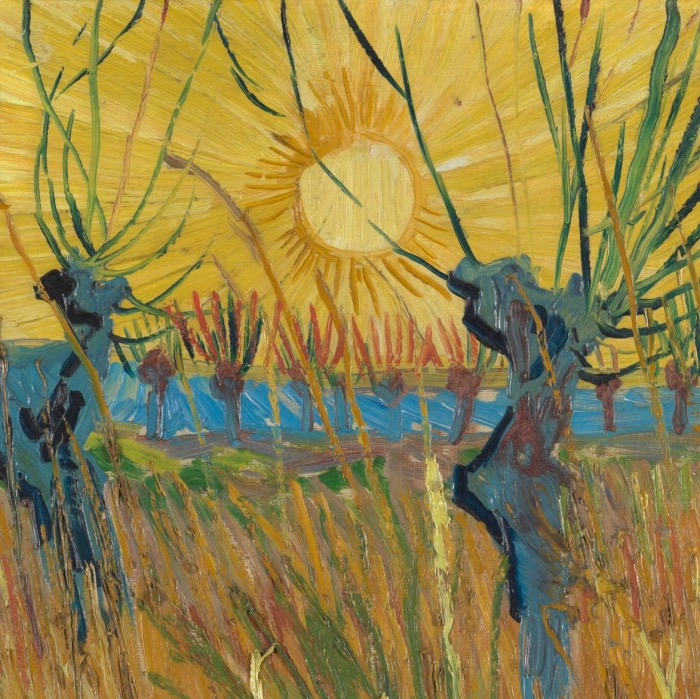 Among Van Gogh’s works this is important because is connected to a particular period of his life, when he was in the asylum in Saint-Rémy-de-Provence, few kilometers from Arles.
In this place the artist of Post-Impressionism felt safe for a while and he was allowed to paint.
It was in his room that he saw what he depicted in this work, where reality is completely transformed into an inner landscape.
For more informations about this works read also The starry night by Van Gogh: what it represents The list of Van Gogh’s most important works must comprise the “Sunflowers”.
Like cypresses, wheat fields and starry nights “Sunflowers” are a subject often painted by the artist.
For Van Gogh sunflowers represented light and heat, and in a sense trust and optimism.

BOOKS RECOMMENDED TO KNOW THE WORKS OF VAN GOGH

To learn more about van Gogh’s life and works, I recommend reading the following books: