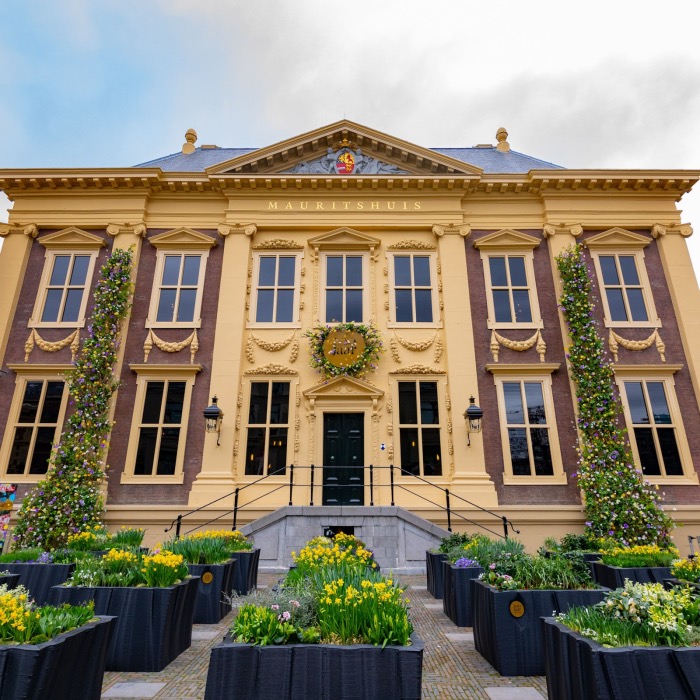 If you are in the Netherlands and have the chance to pass through Den Haag (The Hague), you cannot miss the artistic gem this city has in store for you.
The Mauritshuis Museum is a small art gallery that houses the major works of the Dutch Golden Age of the 17th century.

From Rembrandt’s works to Vermeer’s famous still lifes, for which the Dutch were so admired, in this treasure trove of beauty you will find paintings to suit all tastes in an equally impressive location.
The Mauritshuis in fact owes its name to Johan Maurits, the first occupant of the residence and Count of Nassau-Siegen, who had the building constructed between 1633 and 1644.
You will thus find yourself strolling through the rooms of the museum admiring not only the wonderful paintings, but also the palace itself.

Chiara Bressan visited the Mauritshuis for The ART post Blog this fascinating museum and here she proposes some of the must-see works.

VISIT TO THE MAURITSHUIS

One of the first paintings we come across is Apollo portrae Campaspe, by Willem van Haecht. It is an example of meta-painting: a painting within a painting.
A large number of paintings, all actually existing, from Flemish, German and Italian art are in fact depicted within the scene, together with some famous classical sculptures. 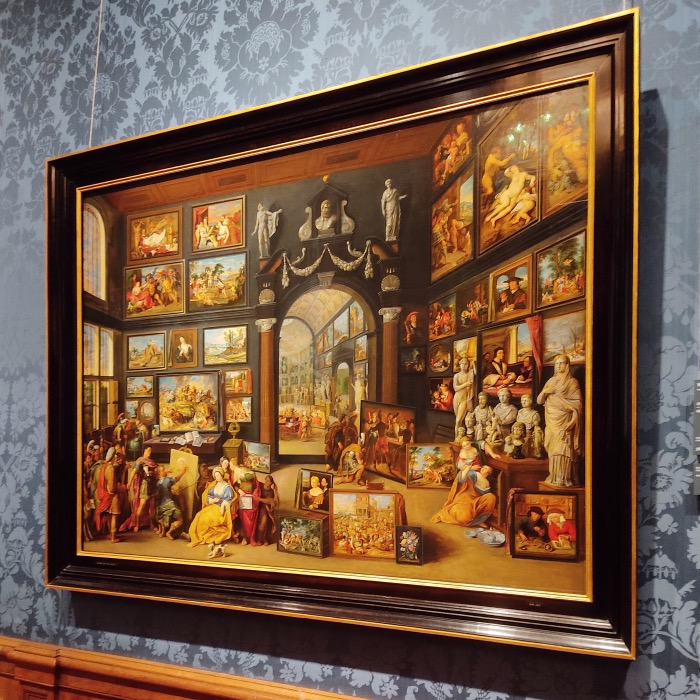 The protagonist of the scene, which then gives the work its title, is on the left and is intent on portraying the beautiful Campaspe, Alexander the Great’s lover.
Legend has it that the great leader, once he saw the work completed by Apelles, fell in love with it so much that he preferred it to the real Campaspe, giving the latter to the artist. A patron Alexander the Great therefore and a profound lover of art is what emerges from this story.
Could this also be why the room is so full of works?
The fact is that the attention to detail in the painting is maniacal and already reveals one of the main characteristics of Flemish art.

Within the walls of the Mauritshuis are the works of one of the best known artists of the 17th century: Paul Rubens.
In Old Woman with Boy and Candles, two things are visible above all: the extraordinary use of light, characteristic not only of Rubens but of the greatest Dutch painters, and the undoubted influence of the works of Caravaggio, whom Rubens had the opportunity to admire in Italy and whose plastic use of chiaroscuro served as a model for several European artists of the 17th century. 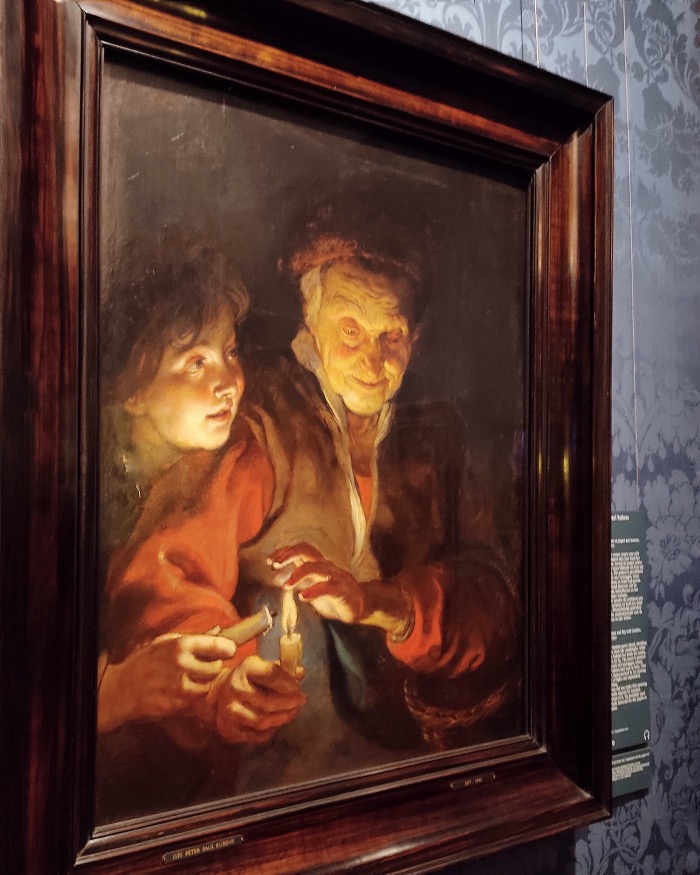 The warm light of the candle illuminates one part of the old woman’s face, leaving the other half in shadow. The same happens with the boy’s face, slightly tilted in profile.
It is the light and shadows that give shape to the figures and draw the scene, making it look incredibly natural and realistic.
Note that although Rubens takes Caravaggio as an example, his personal style remains unmistakable. The colours are always a little muted and the lines are never too sharp, giving the picturesque and peaceful atmosphere typical of his painting.

The Anatomy Lesson of Dr. Nicolas Tulp is probably Rembrandt van Rijn’s most famous painting.
The use of light and shadows is almost exaggerated here.
The painting has very dark tones, the predominant colour being black, with a few touches of light and white on the body of the corpse and on the surgeons’ collars. The light comes from the left and illuminates Dr. Tulp, the protagonist of the scene and commissioner of the painting. 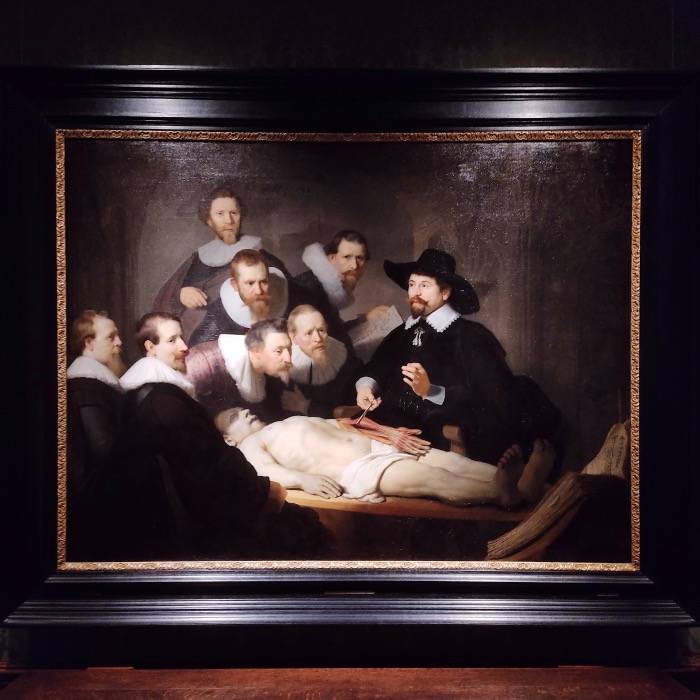 Dramaticity and dynamism are conferred not only by the dark colours and shadows, but also by the lines and structure. The focal point is the anatomy book positioned in the bottom right-hand corner, but each of the characters looks in a different direction, creating lines in each direction.
Dr. Tulp is the only one looking in the opposite direction. The tangle of lines and the arrangement of the characters makes the entire composition appear pyramidal, angular, in line with the scene depicted.
Curiosity: the right hand of the corpse was not originally present and was added later.

The Girl with the Pearl Earring, Johannes Vermeer

The main reason why many visit the Mauritshuis is this painting. Nicknamed ‘The Mona Lisa of the North’, Johannes Vermeer’s The Girl with a Pearl Earring and one of the most important works in the Mauritshuis attracts throngs of visitors because of its mysterious and celebrated fame, made even more popular by Tracy Chevalier’s book of the same name. 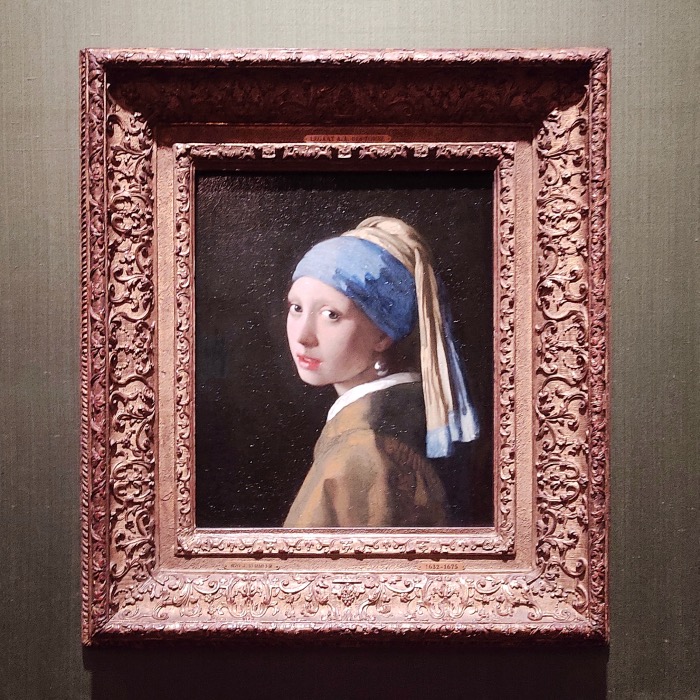 Vermeer’s black background and soft, ethereal light perfectly emphasise the contours of the figure, that angelic, simple face that never actually existed.
The girl is in fact a ‘tronie’, the painting of an imaginary figure, an idea in short.
With her face slightly in profile, her mouth half-closed, her gaze directed at the viewer, the pearly reflection of the jewel in her ear and the bright colours of her clothes, this figure is almost hypnotic.
He scrutinises us, seeming to want to tell us something. Or perhaps he has just finished talking. Is she turning towards us or is she about to turn her back on us and leave?
The girl with the pearl earring is a snapshot of a suspended moment, an ideal so well portrayed that we think she really existed somewhere, if only in the painter’s mind.

Marcel Proust called it ‘the most beautiful painting in the world’.
Johannes Vermeer’s View of Delft is an idealised portrait of his hometown. Once again, the light is unmistakable: delicate, very clear, it lends calm and peace to the whole scene. 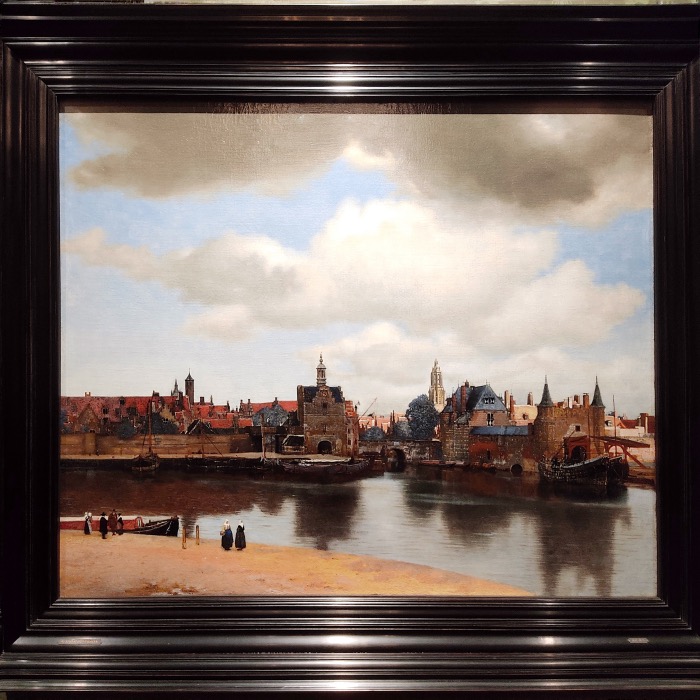 The colour of the sky is a soft blue dotted with white and grey clouds: a storm is coming. The buildings and boats are depicted in extreme detail, the few human figures present are tiny in comparison to Vermeer’s landscape, which is the real protagonist of the work.
The reflections on the water, the colour of the sky, the gentle light falling from above on the roofs of the houses, everything is peace.

Lovers of literature and in particular of the dark academia genre will be well pleased to recognise among the corridors of the Mauritshuis a painting made famous by one of the best-known books of its kind.
Carel Fabritius’s Goldfinch is in fact the same painting that appears on the cover of Donna Tartt’s 2014 Pulitzer Prize-winning book of the same name, and which gives that book its title.

A simple goldfinch perched on a manger can become the symbol of an entire artistic current. The Dutch Golden Age indeed marks a break with the previous period. What he wanted to depict was real life, be it scenes from everyday life or still life or animals painted as realistically as possible.
The goldfinch was painted with coarse brush strokes, in some places clearly visible, and has a golden feather. The colours are soft and the shadow is reflected on the wall.
However, this little bird is chained to its feeder. Does it believe it is free only to discover it cannot fly far?