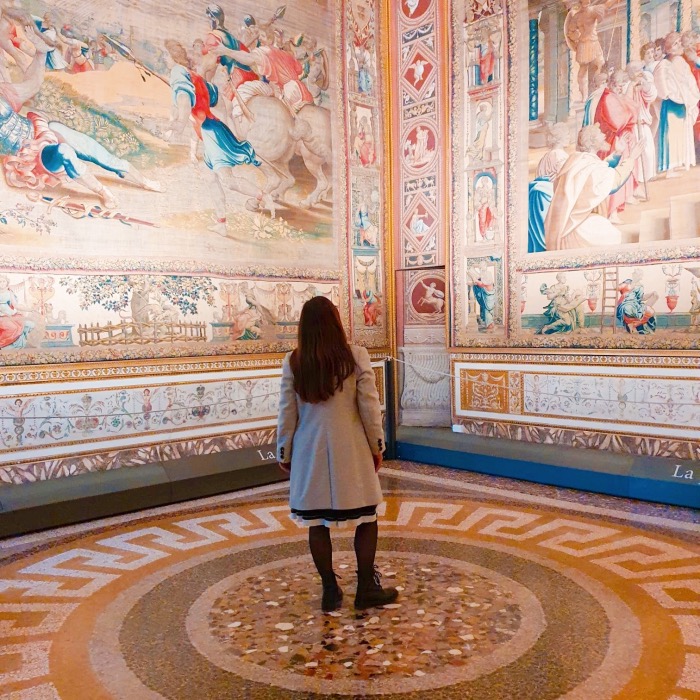 WHAT TO SEE AT THE DUCAL PALACE IN MANTUA

When people ask me what to see in the Ducal Palace in Mantua, I always reply with a list of works of art and rooms that, in my opinion, everyone should see at least once in their lifetime.
Don’t think, however, that a list of four or five rooms means that a visit to the palace is within the reach of those who have little time.

Visiting the Doge’s Palace in Mantua takes at least half a day, but if you want to explore the whole palace at your leisure and get to know a good deal of its history, it might take even longer.
In this post I’ve made a list of what you absolutely must see at the Doge’s Palace in Mantua, but once you’re inside, you’ll be blown away by the vastness of the itinerary and the stories the works of art can tell.

What to see at the Ducal Palace in Mantua 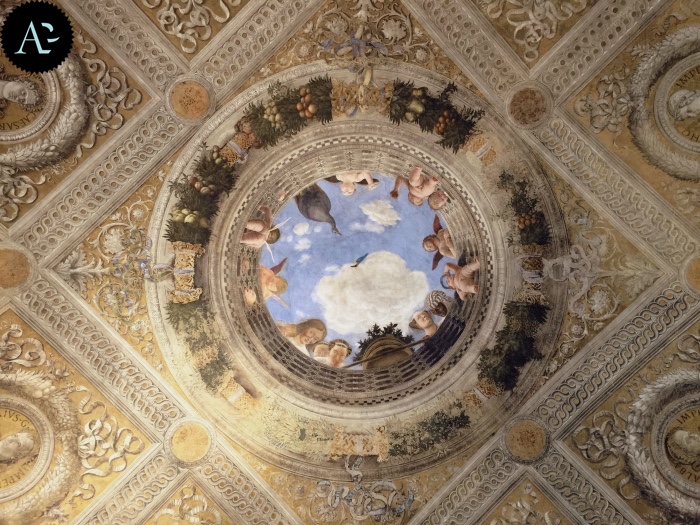 A masterpiece by Andrea Mantegna, the Bridal Chamber was built between 1465 and 1474 for Ludovico Gonzaga and his wife Barbara of Brandenburg.
Despite its name, it is not a wedding room but a reception room where the decorations celebrate the Gonzaga family, amaze the visitor and where the wealth and power of the Dukes of Mantua is clear.

All the characters represented on the walls are faithful portraits of the family and members of the court, but it is the oculus on the ceiling of the room that surprises.
An incredible illusionistic effect for the time, in which it seems as if the ceiling really does have an opening for observing the sky. A decorative element that opened the way to countless other inspirations and variations.

Pisanello was one of the main exponents of ‘flamboyant Gothic’ and in 1433 he began work on the important cycle of frescoes in the Ducal Palace in Mantua.
Scholars believe that it depicts the events of the Knights of the Round Table as told in the Breton novel ‘Lancelot’.

A curiosity: Pisanello’s frescoes were only discovered in the 1960s when, during a restoration project, it was discovered that this marvellous work, which has yet to be studied, existed beneath the wall paintings.

HALL OF THE LABYRINTH

The famous ceiling gives this room its name.
If you look up, you can admire the labyrinth with the motto “Forse che sì, forse che no” (“Maybe it is, maybe it isn’t”), taken from a famous 16th-century love story and alluding to the uncertainty of life.

This room inspired Gabriele D’Annunzio’s novel “Forse che sì, forse che no”, published in 1910, which narrates the love affair between Paolo Tarsis and Isabella Inghirami.
However, there is also a room created in the 19th century and inspired by the Labyrinth Room. This is the Passaggio del Labirinto (Labyrinth passage) in the Museo Bagatti Valsecchi in Milan, in the centre of which the inscription SIC ITUR PER ANGUSTA AD AUGUSTA (So one comes through difficulties to lofty things) stands out. 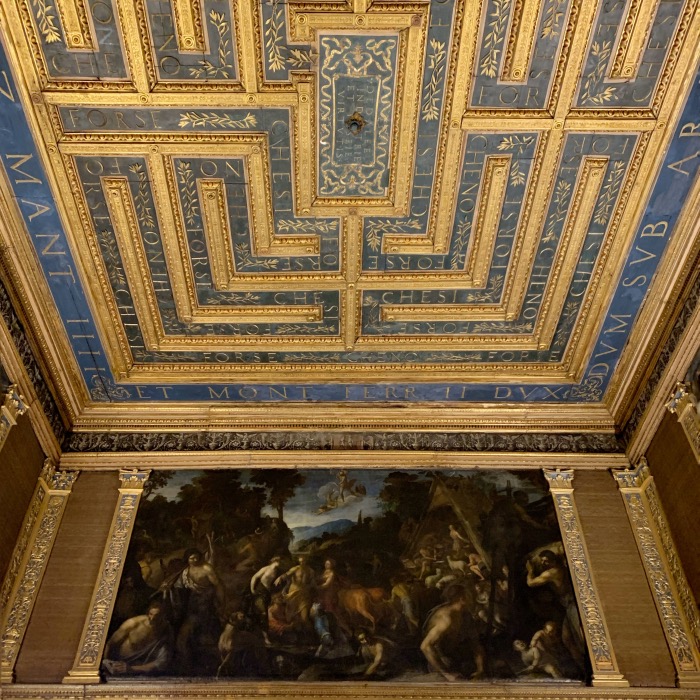 ROOMS OF THE TAPESTRIES

There are four rooms that house nine precious tapestries from the 16th century that reproduce stories from the Acts of the Apostles that Raphael made for the Sistine Chapel.
These are authentic copies taken from Raphael’s cartoons, now in the Victoria and Albert Museum, and which were used by Brussels tapestry makers to create this cycle of refined and rare works.

It was Cardinal Ercole Gonzaga who bought them in 1559 for the Basilica of Santa Barbara.
In the eighteenth century the tapestries were moved to the rooms where they are now and where canvases were made, painted as mock tapestries, with scenes from the Old and New Testaments.

The Galleria delle Metamorfosi reopened to the public on 9 April, with a brand new collection and layout recalling the Wunderkammer of the Gonzagas.
An event that not only marks the reopening of an area previously closed to visitors for years, but an opportunity to offer the public a completely new section to see at Mantua’s Ducal Palace with an entirely new collection that evokes the Gonzagas’ famous Wunderkammer (“chamber of wonders”).

The Galleria delle Metamorfosi (Gallery of Metamorphoses), so called because of its decorations inspired by the work of the Latin poet Ovid, is also known as the “Galleria di Passerino” (Passerino’s Gallery).
It was here that the Gonzagas preserved the mummy of the previous Captain of the People, Passerino Bonacolsi, who was killed in 1328 to take his place as leader of the city.

These rooms housed the naturalistic collections of the Gonzagas, which, like a sort of science museum, were used to admire and study animal, mineral and vegetable finds that were rarely seen at the time.
A collection that was also used to amaze popes, princes and diplomatic delegations visiting the Palazzo Ducale in Mantua. A display of power!

Of the legendary naturalistic collection of the Gonzagas, only the hippopotamus, now in the Kosmos Museum in Pavia, on which Passerino Bonacolsi was placed, remains today. The rest of the objects that are now part of the collection on display in the Galleria delle Metamorfosi are the result of reconstruction and a series of acquisitions.

The Metamorphosis Gallery is also interesting for its architecture and decoration.
Divided as it is into four rooms, each of which recalls a natural element. The stucco and paintings were designed in the late 16th century by Antonio Maria Viani and the four-part gallery has an extraordinarily Central European appearance. 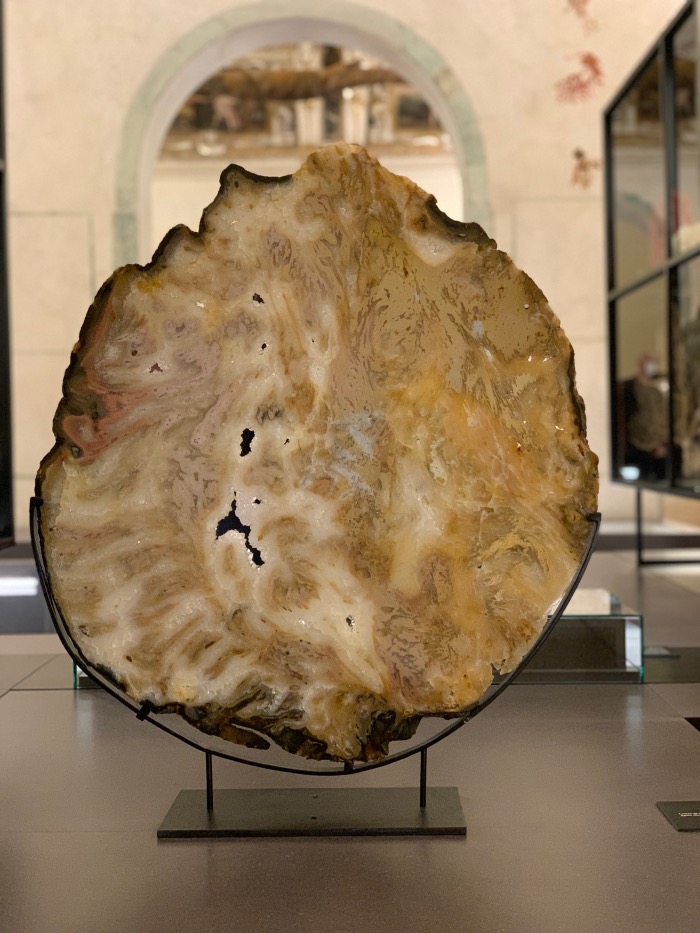 The opening of this new section also makes it possible to visit other sections of the Doge’s Palace: to access the Galleria delle Metamorfosi the public will be able, from the Appartamento di Troia in Corte Nuova, to follow the route that includes the Galleria dei Mesi (currently under restoration) and the extraordinary Galleria della Mostra, overlooking the Cortile della Cavallerizza.

Among the precious and rare exhibits in the Metamorphosis Gallery is also a Unicorn Horn, or narwhal tooth.
Until the mid 17th century, the narwhal, a cetacean from the northern seas, was not suspected of existing, at least in Italy, and its long tusk was mistaken for the horn of the mysterious and mythological unicorn.

The famous ‘monoceros‘ has been written about since antiquity: at least since the 5th century BC, when Ctesia of Knidos, physician to Artaxerxes II Mnemon king of Persia, wrote that in Hindustan, an alluvial plain crossed by the Ganges and Indus rivers, there lived this species of donkey with a white fleece and purple head on which a single horn stood out, white near the head, black in the middle and crimson towards the tip.
Since then, descriptions multiplied and the unicorn became a splendid white horse with a horn on its forehead. According to other descriptions it could have the features of a donkey and even a goat.
The tendency to describe it as white, candid, also became established because the animal took on a symbolic meaning linked to purity. 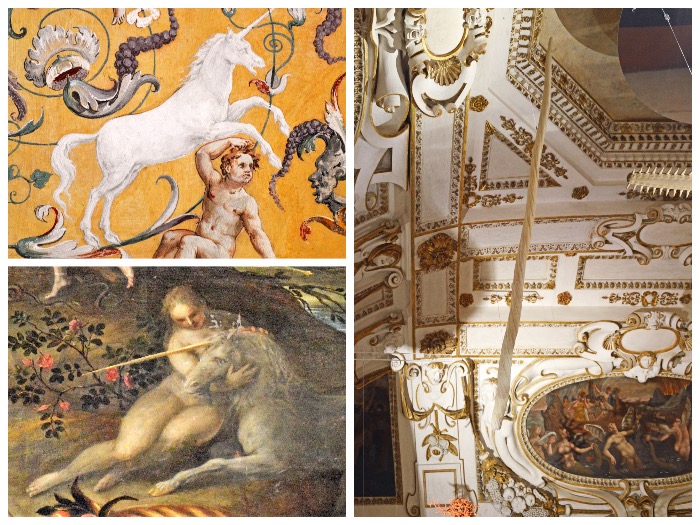 The horn of this beautiful, snow-white animal became synonymous with power.
The ‘Throne of Consecration’ of the royal family of Denmark, in Rosenborg Castle in Copenhagen, is largely constructed using these horns.
Of course, the Unicorn horn could not be missing in Italian Renaissance courts either.
Isabella d’Este exhibited, at the Ducal Palace in Mantua, in her Grotto ‘an alicorn horn seven and a half palms long, which is placed above the armarii, on the top of two twisted ramps’ and this horn was reputed to be the most beautiful in Europe, together with the specimen in the possession of King Sigismund of Poland.
The value of the object was linked to its rarity, its mysterious origin, its allegorical value and its alleged therapeutic properties.
The horn, in fact, when pulverised, was considered by the medicine of the time to be the best possible antidote against poison.

Inside the Ducal Palace in Mantua, there are at least three representations of the Unicorn: 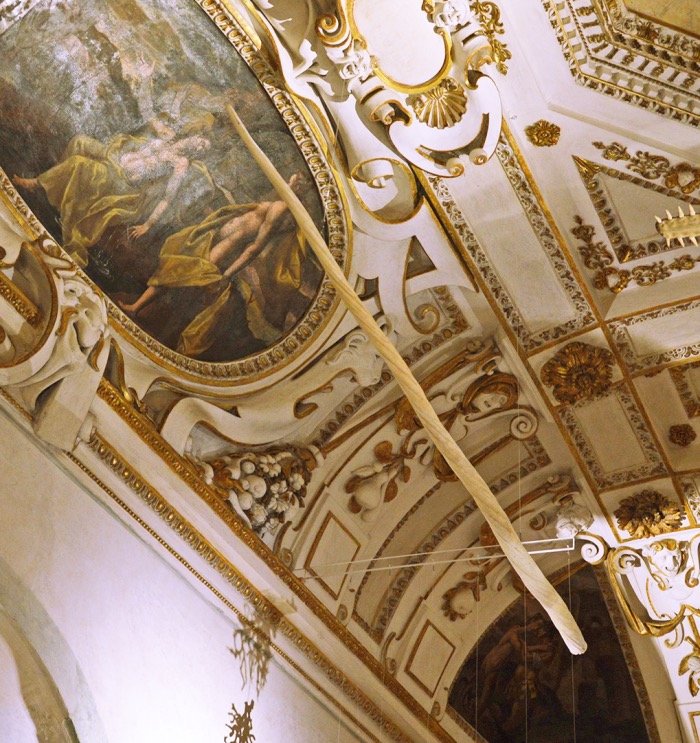 It was in the 17th century that the narwhal tooth lost its mythical value.
It was the Danish physician Olaus Worm who hoped for the spell in 1655, later followed by other scholars, claiming that unicorns did not exist!
It was he who revealed that it was the tooth of the narwhal, a cetacean that inhabits the North Seas and whose male specimens possess a tooth that protrudes from the upper lip to form a tusk up to two metres long.
Isabella d’Este, however, did not know this, and neither did Ulisse Aldrovandi, a famous naturalist who lived in the second half of the 16th century, who, in 1571, saw and described the Unicorn horn of Mantua:

“A unicorn of the length of nine palms … Made in a spiral, it is fluted and twisted, of a whitish colour’.

The Narwhal tooth recovered and displayed in Mantua’s Ducal Palace arrived after a long journey, with certificates proving that the object did not come from illegal hunting.
The Inuit, in fact, can hunt the narwhal from August to October each year and the harvested tusks can only leave Canada for special reasons.
Finally, a Unicorn horn has returned to Mantua and it is precisely 178 cm long, like the one owned by Isabella d’Este.