WORKS BY CANOVA: THE MOST BEAUTIFUL AND THE MOST IMPORTANT ONES

Works by Canova. A photo gallery dedicated to Antonio Canova.
The main works by one of the main neoclassical artists and the last great Italian artist at European level, as well.

Canova’s white marble statues are characterized by harmony and refinement and they represent the universal idea of beauty.
The subjects of his sculptures are two: mythological allegories and funerary monuments.

READ ALSO: Antonio Canova. Life and works and see also the photos of the Sale Canoviane at the Museo Correr in Venice. 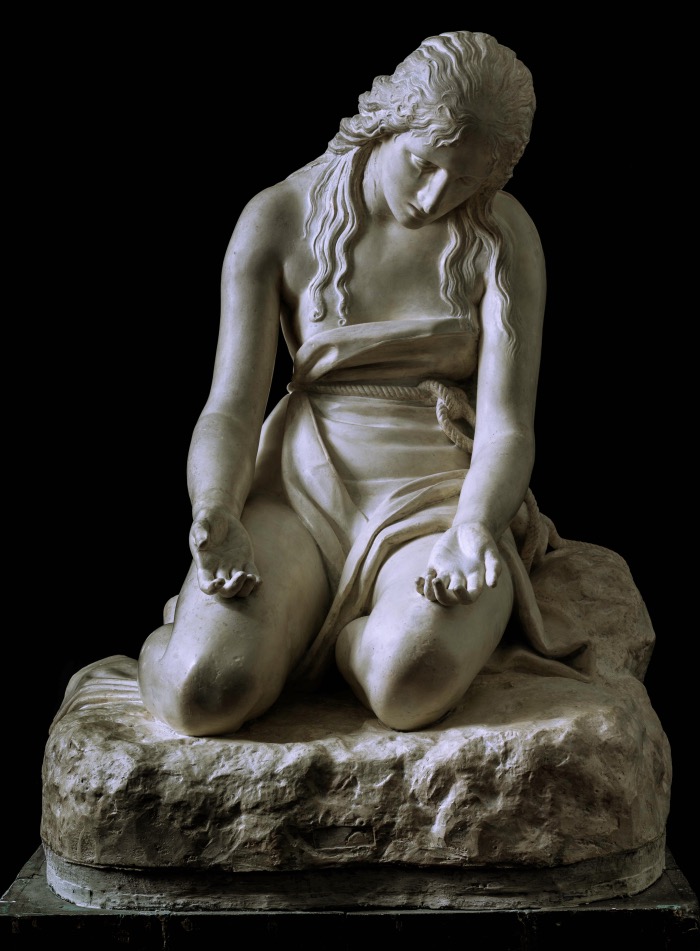 The figure of the Penitent Magdalene (c. 1812) immediately imposed itself as one of Canova’s most successful inventions, capable of arousing emotion and rapture in the minds of both the more orthodox supporters of neoclassical dictates and those who theorised a romantic and sentimental turn in the visual arts not unlike what had long been undertaken in literature.

Antonio Canova’s Penitent Magdalene, which is part of a long and successful tradition in Venetian art but which undoubtedly also looks with originality and intelligence to the model of Caravaggio’s Penitent Magdalene that has always been part of the collection of the Galleria Doria-Pamphilij in Rome, Canova painted two versions: The first dates back to 1794-96 and he was never very satisfied with it, while the second was sculpted in 1809 and is the source of this magnificent cast, recently rediscovered, which came to the Accademia di Bologna at an unfortunately unspecified time, it is not known whether as a direct gift from the artist or through other channels. Paolina Borghese was Napoleon’s sister and wife of Prince Camillo Borghese.
This sculpture was commissioned in about 1805 precisely by Paolina’s husband to celebrate the beauty and power of his wife: a beautiful 25-year-old woman and protagonist of the social life of her time.

I dedicated the post Paolina Borghese to this spectacular sculpture: where to see Canova’s sculpture that I recommend you read 😉 The Lion of the Gallerie dell’Accademia was created by Antonio Canova for students of the Academy of Fine Arts in Venice.
This Lion was conceived by the artist as a didactic tool for the students of that school where he himself had studied and to which he remained attached throughout his life.
This lion is not of marble, it was not made for a rich nineteenth-century businessman, it was not placed in the hall of a sumptuous palace.

This Lion is part of the museum itinerary of the Gallerie dell’Accademia in Venice, which exhibits a series of works that Canova had designed for educational use and therefore reserved for students.
All information on this section of the museum can be found in the post CANOVA IN VENICE: CANOVA AT THE GALLERIES OF THE ACADEMY OF VENICE Daedalus and Icarus was commissioned to the artist by the prosecutor Pietro Vettor Pisani for the Pisani Moretta palace on the Grand Canal.
The artist was only 27 years old and, despite his young age, he manages to create a masterpiece that represents a turning point in his career. In fact, with the fee agreed with the client Canova he moved to Rome to complete his training, going to the Eternal City to observe live the works of classicism. 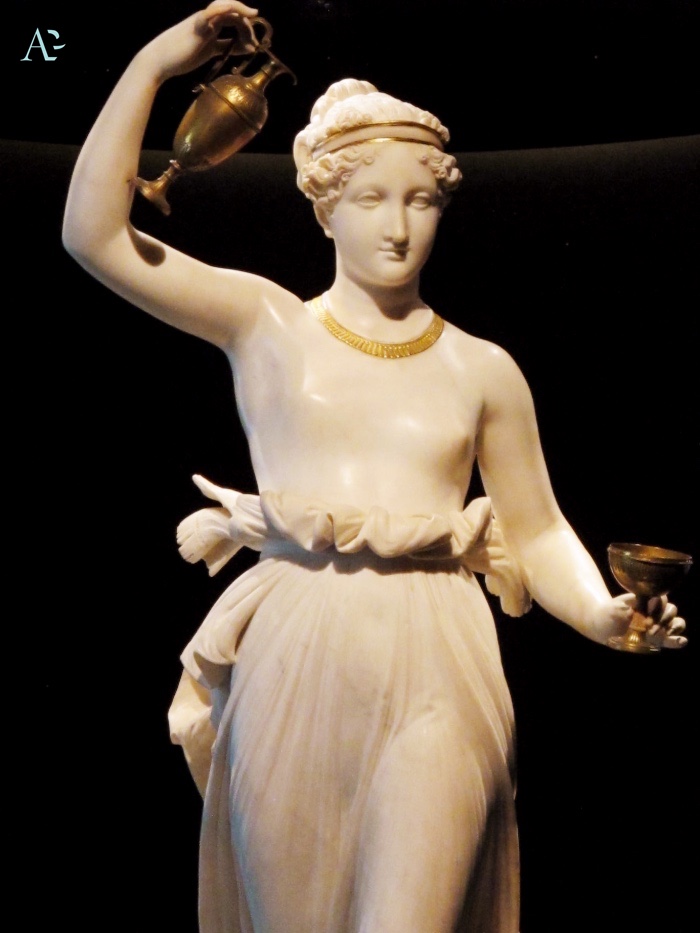 Antonio Canova’s Ebe is a sculpture preserved in the San Domenico Museums of Forlì.
It was commissioned to the artist by Countess Veronica Zauli Naldi Guarini in 1816.
The sculpture was sold by the heirs of the countess to the municipality of Forlì and it is now possible to admire it at the end of the museum itinerary.

The peculiarity of this work is that Canova inserted a mechanism that allowed the sculpture to rotate, so it was possible to admire it at 360 degrees and without turning around. Orpheus and Eurydice (1775-1776) is Canova’s first great masterpiece, which with this sculptural group can demonstrate his talent and abilities.
The artist creates this work for the residence of Senator Giovanni Falier in Asolo and consists of two sculptures that must be placed close to each other.
Now the sculptural group is exhibited at the Correr Museum in Venice. Cupid and Psyche is probably the most beautiful sculptural group that Canova has made.
It represents the love encounter between two young people and the struggle between heart and mind.
Love went to Psyche every night to be with her but could not show her face. Until one day, driven by curiosity, the girl wanted to look at the face of her beloved, infuriating the god.

The work was commissioned to Canova in 1788 and I told its whole story in the post Amore e Psiche: where it is and why Canova created it. 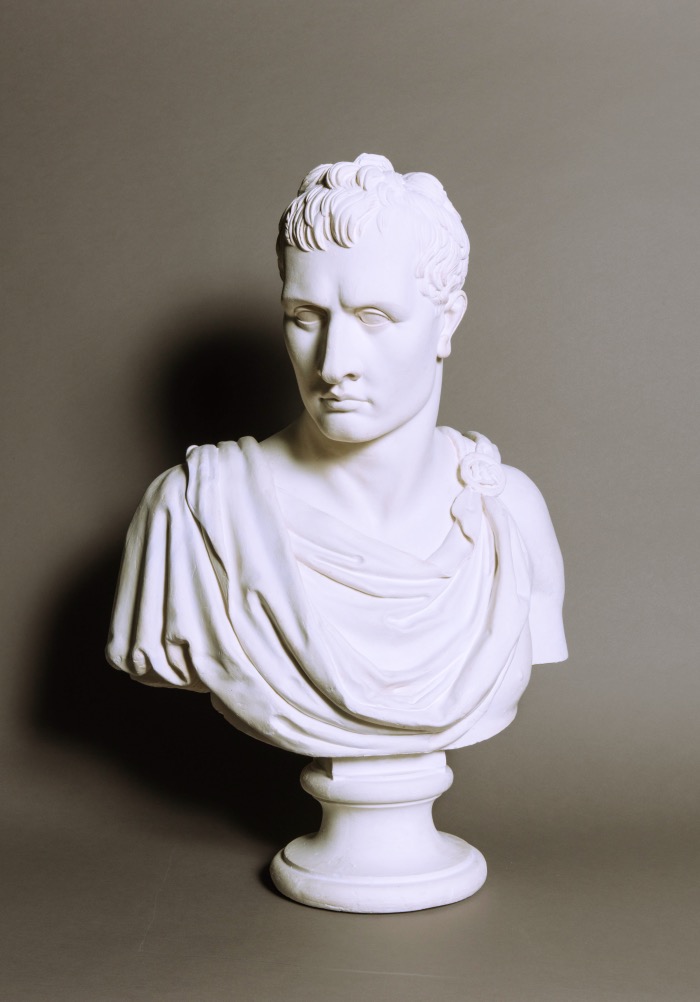 Invited by Napoleon to go to Paris to paint his portrait, Canova arrived in early October 1802 and set to work on a clay model in just five sittings.
From the clay model he then made a plaster cast and returned to Rome at the end of December to complete the work.
From this first portrait, a perfectly frontal half-length bust dressed in modern clothing, Canova sought the form that most convinced him and which eventually led to the creation of a bust of Napoleon as Mars the Peacemaker.

The bust of Napoleon I (c. 1803) represents one of the most interesting representations of Napoleon by the artist. It is a little known bust and rarely exhibited to the public, kept in the Civic Museums of Bassano del Grappa. 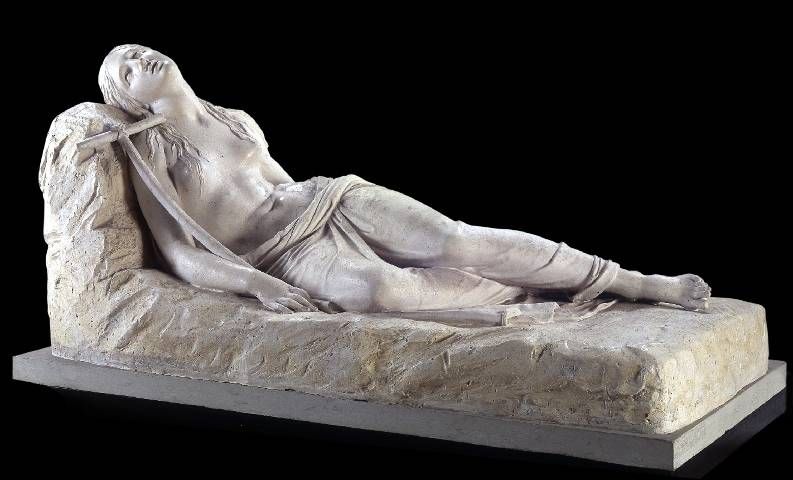 Created by Canova in the last years of his life, for years it was thought that the work had perished. In fact, it had been bought and sold by various owners until, at the beginning of the 21st century, an English couple bought it at a garden statue auction for £5,179 (more or less €6,000).

Commissioned in 1819 by the then English minister Robert Jenkinson, 2nd Earl of Liverpool, for 1,200 guineas (about 13,000 euros today), the statue is one of the last works by the neoclassical artist, made in the 1820s.
After the death of the client in 1828, his brother put it up for auction in 1852 until, after several changes of ownership, the work was never heard from again.
When it appeared at an auction in 2002, it was catalogued as a “classical figure”, without attribution. It was the last owners who realised that the sculpture was too beautiful and refined to be the work of a stranger, so they persuaded themselves to contact an art expert who unravelled the mystery.

The Recumbent Magdalene will be exhibited at Christie’s in London on Saturday 19 and Sunday 20 March 2022, before moving on to New York (8-13 April 2022), Hong Kong (27 May-1 June 2022) and finally returning to the British capital for three weeks in June. Antonio Canova was the last great artist born in what was the ancient Republic of Venice.
His talent crossed the borders of his homeland and conquered Europe and the world.
Suffice it to recall that he even made a sculpture of the First President of the United States of America, George Whashington. Work that was destroyed by a fire but its appeal remains in sketches, drawings and copies.
To find out more about this brilliant artist, I suggest you also read the post on the life and works of Antonio Canova.