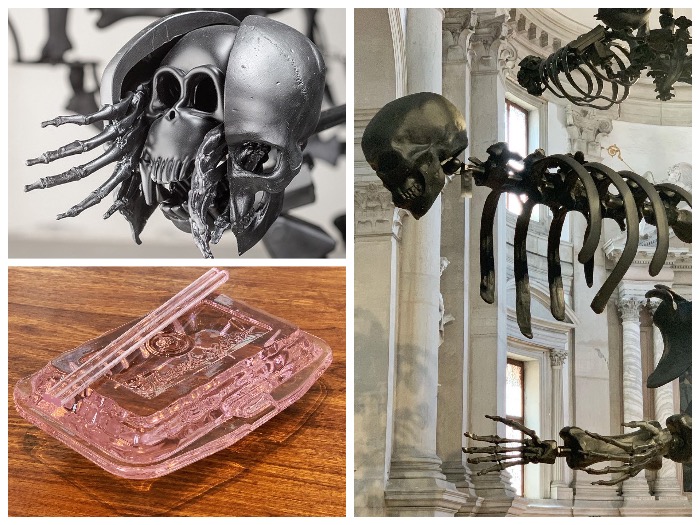 Ai Weiwei plays with materials, with history, with the location and creates Ai Weiwei. La Commedia Umana – Memento Mori, the strangest, funniest, freest exhibition there is.

From 28 August to 27 November 2022, the Chinese artist Ai Weiwei presents a solo exhibition in Venice, at the Abbey of San Giorgio Maggiore, featuring the largest suspended glass sculpture ever made and a selection of some of his works. 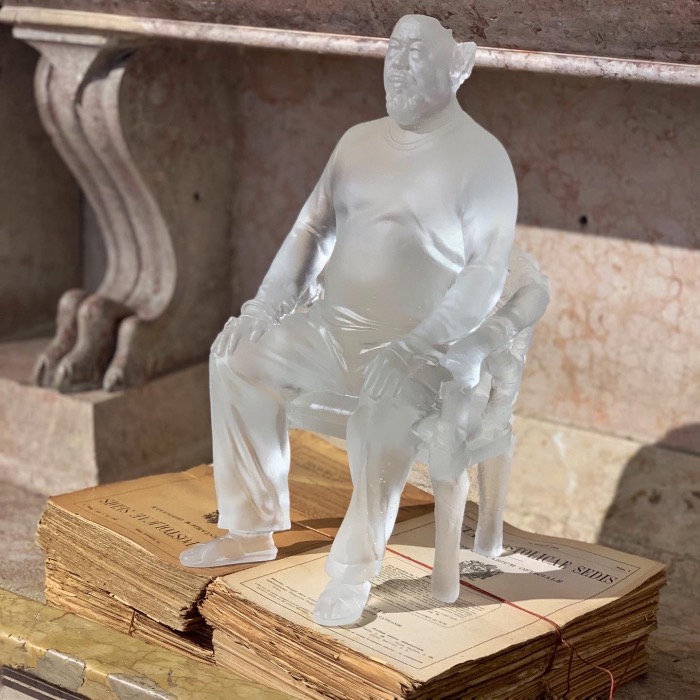 Picasso said that ‘every child is an artist. The problem is then how to remain an artist when you grow up’.
There is in Ai Weiwei’s works that irony and that view of the world that only a child has and that allows him to create sculptures with glass that look like metal, to create images with Lego that look like paintings, and to create ironic and unconventional sculptures.

It consists of over two thousand pieces of black glass, the result of a three-year collaboration with the master glassmakers of Berengo Studio, La Commedia Umana is a colossal work.
More than 6 metres wide by almost 9 metres high, it is in fact the largest suspended sculpture ever made of Murano glass.

The work is a complex monument consisting of a cascade of bones, organs and objects that you don’t expect (from Twitter birds to cameras to tilts) and that call to mind many elements of the artist’s long career.
It is a manifesto that, according to the artist, “attempts to talk about death in order to celebrate life”.

The symbols of Ai Weiwei’s poetics are distorted and reinvented in this monumental work, finding a new collocation and joining a noble material such as Murano glass.
Moreover, Ai Weiwei reinterprets the traditional Murano glass chandelier and distorts its function to reflect on the alienating relationship between Man and Nature, reminding us that our every action always has an impact on the environment in which we live.
An even more important message if Ai Weiwei chooses Venice, at the centre of the delicate lagoon ecosystem, to launch it.

THE GLASS WORKS OF AI WEIWEI

In the exhibition route Ai Weiwei. La Commedia Umana – Memento Mori one also encounters some glass works that the artist created in collaboration with Berengo Studio.
These works document a friendship and a journey that began in 2009 and which allowed the artist to experiment and create new forms and sculptures. 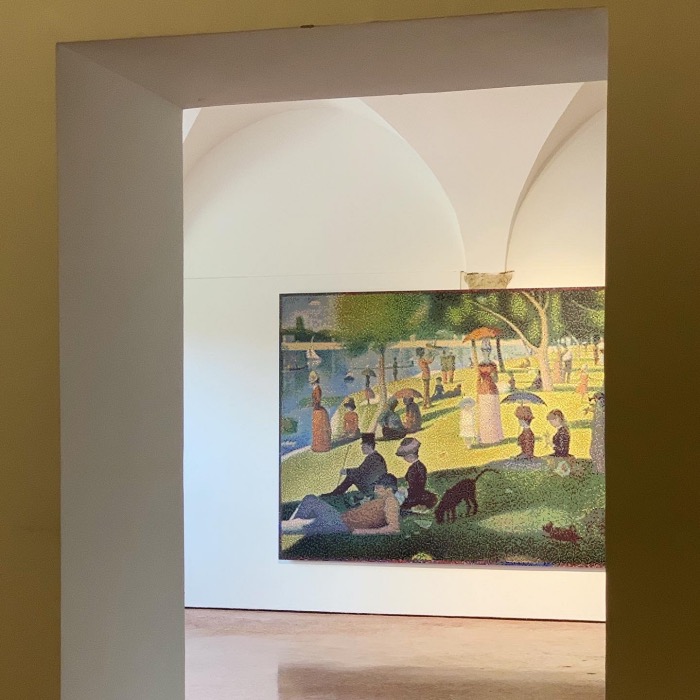 The exhibition also allows visitors to admire Roots, the result of a trip Ai Weiwei made to Brazil in 2017.
Inspired by a poem written by the artist’s father, Ai Qing, about how trees can communicate through their roots placed underground, the remains of an ancient Pequi tree have been put together and speak to us of natural death but also deforestation. 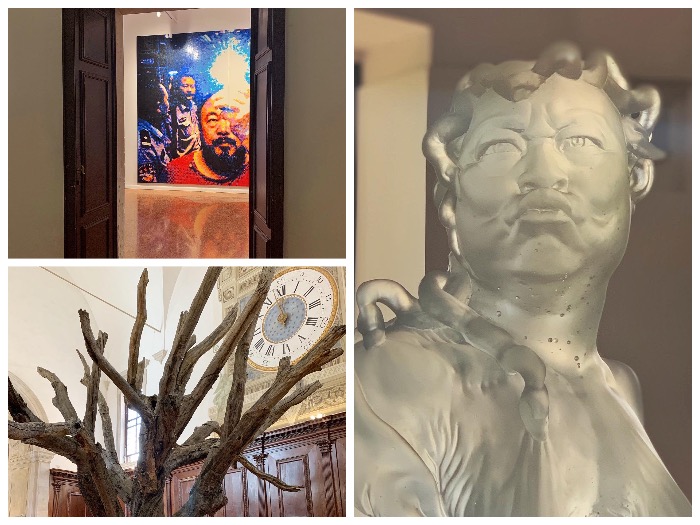 When discovering Ai Weiwei and his works, one cannot help but notice how the dimension of play is always present in him.
On show are some works from the LEGO series, which since 2007 have allowed him to experiment with new forms of art.
In the exhibition there are reproductions of some of his famous photographs and some great masterpieces of art history, thus questioning the boundaries between ‘high’ and ‘low’ art, between masterpiece and product.

Ai Weiwei considers LEGO bricks to be a material of infinite possibilities, of great adaptability and accessible to everyone.
In each of its small elements we can see a child’s game, a pastime but also a pixel-like element of a perpetually connected society that now admires the works of art of the great masters through a screen.

Ai Weiwei’s works made with LEGOs look two-dimensional, but they are more than that. They lie somewhere between installation, painting, sculpture, pixelart and mosaic. It is impossible, in fact, to observe them without remembering that the fabulous mosaics of St Mark’s Basilica are just a short distance away. 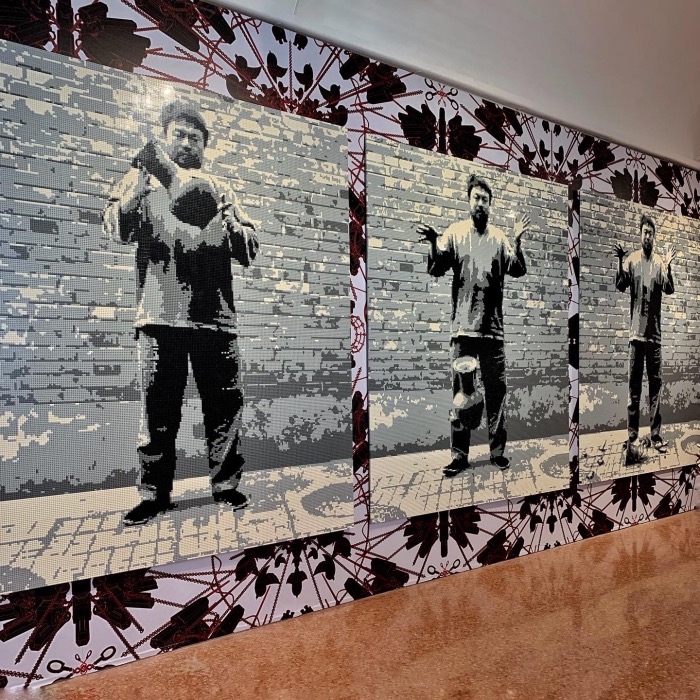