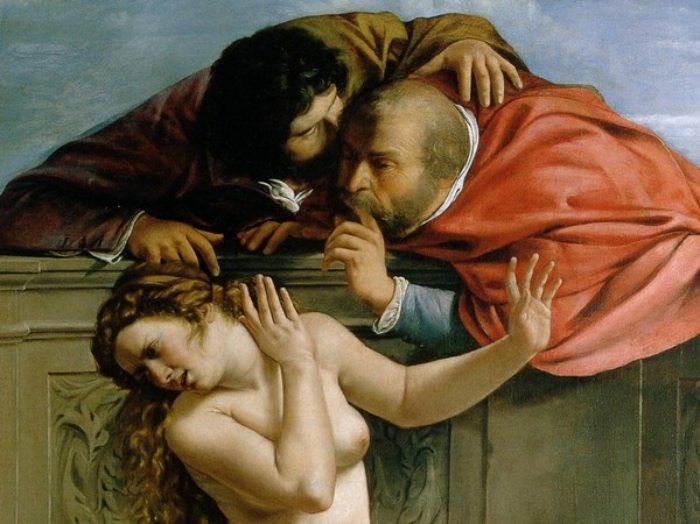 WORKS BY ARTEMISIA GENTILESCHI: THE MOST IMPORTANT ONES AND WHERE TO SEE THEM

Works by Artemisia Gentileschi you must know to understand the greatness of a one-of-a-kind artist in the artistic community of the 16th century.

In this post you’ll find some of the most important works by Artemisia Gentileschi with all useful information about where you can admire them.

Artemisia Gentileschi. Susanna and the Elders

Susanna and the Elders (1610)
This is the first work painted by Artemisia Gentileschi, where she put her father’s teachings into practice with close attention to anatomy and the use of chiaroscuro technique to highlight volumes.
The painting is part of the Graf von Schönborn collection, in Pommersfelden.

Judith Slaying Holofernes (1612 -1613)
The canvas was painted a short time after the trial in which Artemisia Gentileschi accused Agostino Tassi of sexual assault.
Since the two events were so close, many scholars think that the violence portrayed in the painting is the result of the feeling the artist felt at that time. Although Artemisia had to stand up for herself publicly, she was able to execute a realistic painting, by using the colour to highlight the excited moment of beheading.
The painting is displayed at the Capodimonte Museum in Naples. 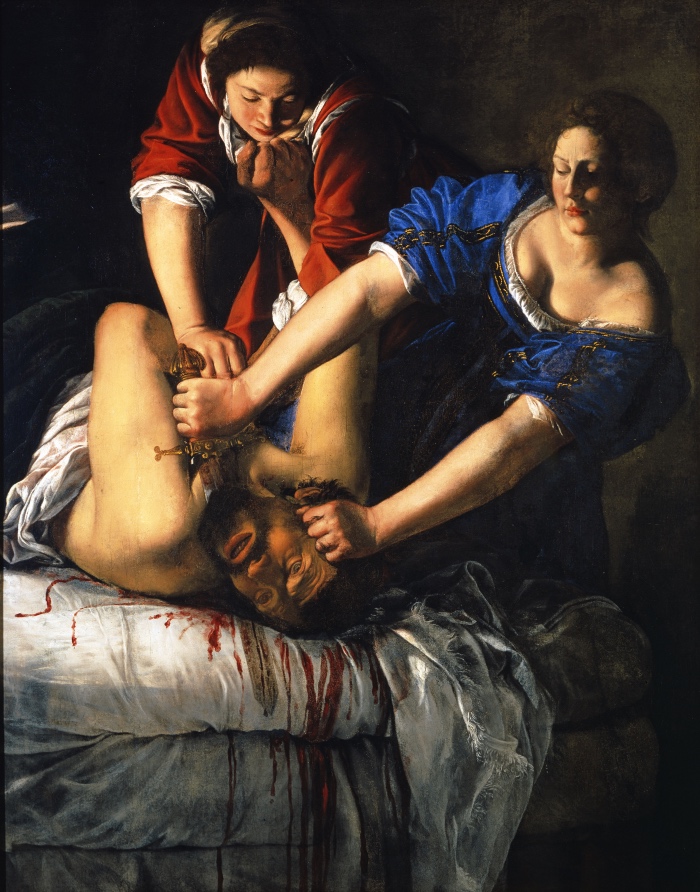 Judith and Her Maidservant (around 1618-1619)
The painting was executed during Artemisia’s stay in Florence, and the two women portrayed are lit by a light which seems to come from a candle, which gives the scene a dramatic atmosphere.
Artemisia Gentileschi depicts again the biblical story of Judith and Holofernes, and the painting illustrates the precise moment in which the women are taking the enemy’s head away, hidden in a basket, but they look scared by something or someone.
The painting hangs in the Palatine Gallery in the Pitti Palace in Florence. 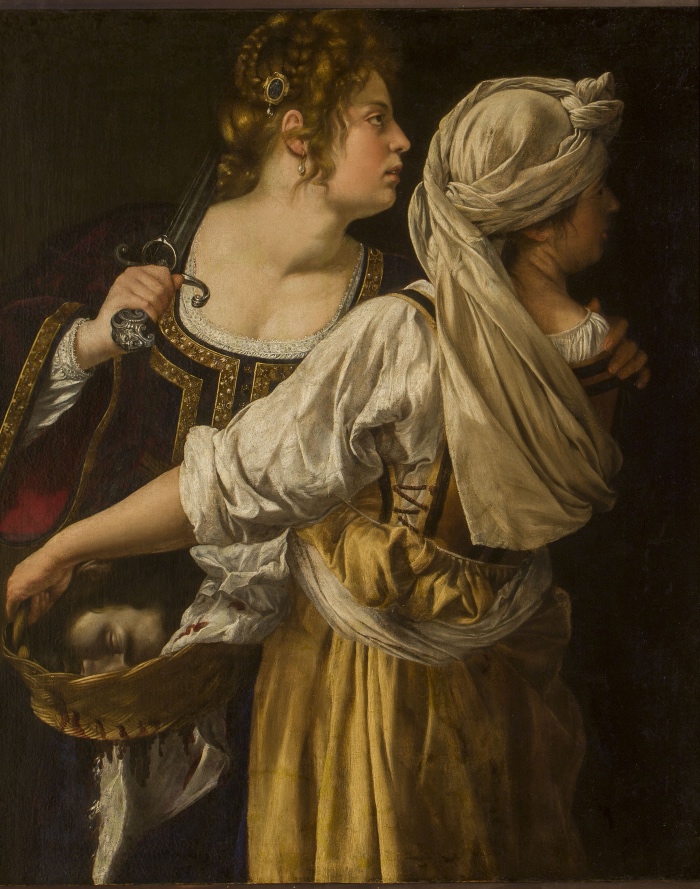 Artemisia Gentileschi. Judith and Her Maidservant

The Conversion of the Magdalene  (1615 -1616)
Once again this is an all-female subject, and Artemisia portrays the story of Mary Magdalene, the only female follower of Jesus, but with a talked-about past because she had been a prostitute.
She wears a lavish and golden yellow dress which gives the painting a noble and elegant aspect, differently from other representations of the same subject where the Magdalene was depicted in a sensual way.
The painting hangs in the Palatine Gallery in the Pitti Palace in Florence. 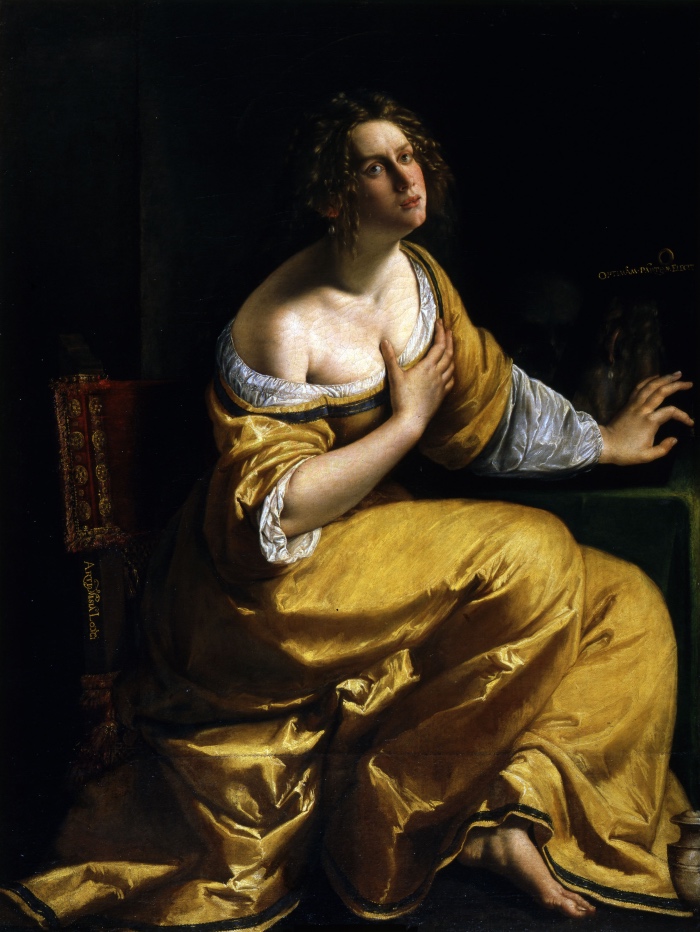 Artemisia Gentileschi. The Conversion of the Magdalene

Giuditta e la sua ancella (1625-27)
Judith and Holofernes is the biblical theme that Artemisia has treated most often in her paintings. He described both the beheading of Holofernes and the escape of Giuditta and her handmaid, as in this case.
This work was made in Rome, where Artemisia saw the paintings of Northern European painters who had arrived in Italy and painted in the style of Caravaggio.
Evidently the artist was struck by the representation of the night scenes, typical of Nordic works, in which the light comes only from a candle and makes the scene even more dramatic.
Looking at this painting, one cannot help but think of the works of Gerrit van Honthorst, also known by the name of Gerardo delle Notti, who was the main representative of candlelight painting.
The work is kept at the Detroit Institute of Arts. 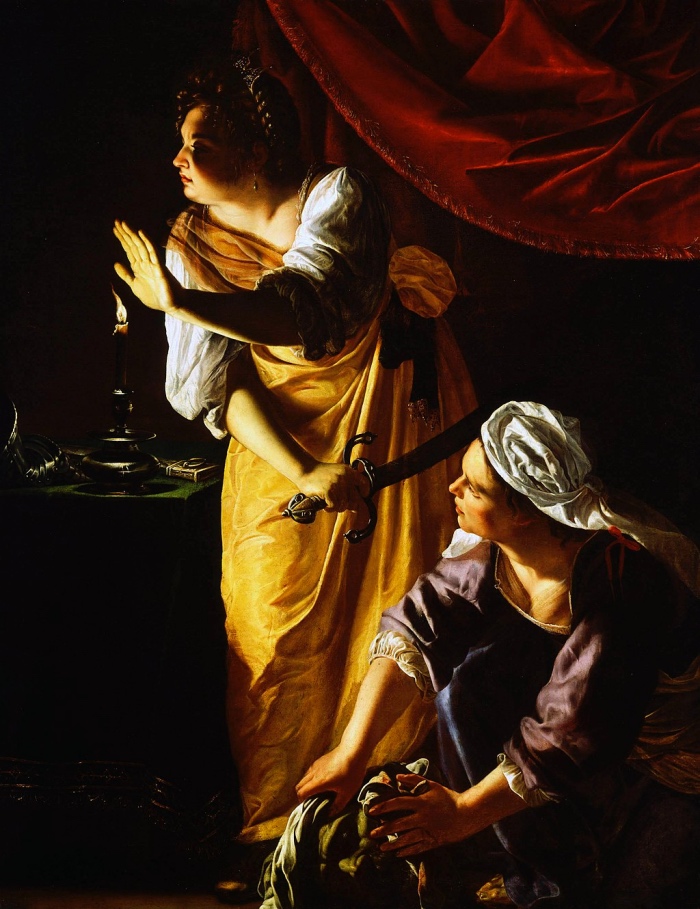 Self-Portrait as the Allegory of Painting (1638-1639)
In this self-portrait Artemisia depicts herself as a woman wearing a long chain of gold from which hangs a mask, her hair is untidy and she holds in her hands the instruments of her job: a paint brush and a palette.
The painting hangs in Kensington Palace in London. 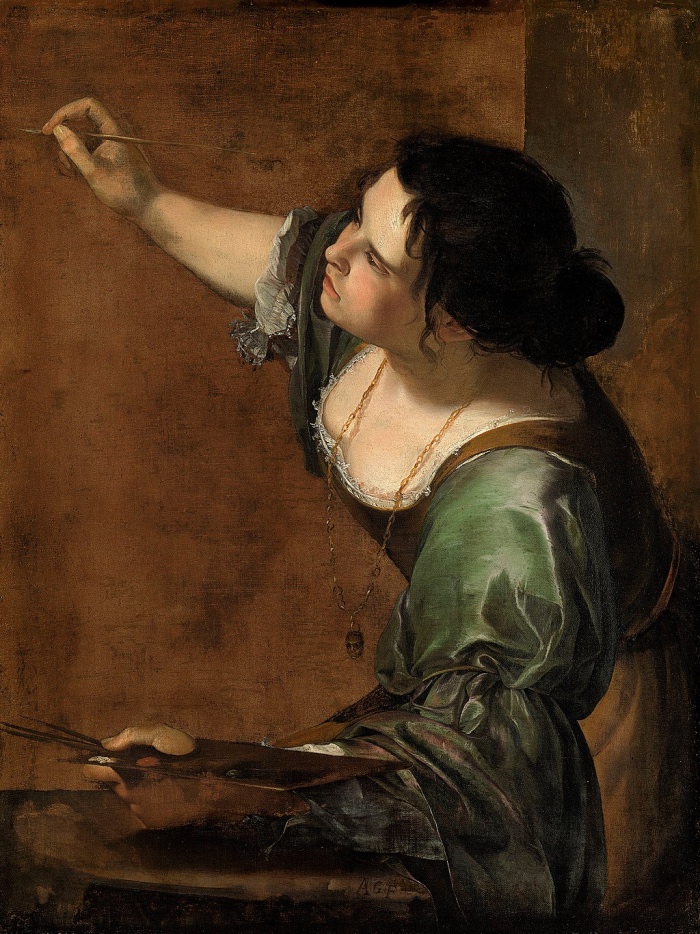