Rodolfo Aricò’s works explore the concept of spatialism and provoke a discussion on the infinite possibilities of the canvas form.
It is precisely the canvas in Rodolfo Aricò’s life’s work that becomes a space that can be transcended through the principles of perspective axonometry or even through a special application of colour.

Space and the viewer’s perception of it are the main themes one encounters in Rodolfo Aricò’s works.

The works of Rodolfo Aricò

Rodolfo Aricò, born in Milan in 1930 (died 2002), developed his archetypal figure in the 1960s from the axonometric translation of a diagonal disc in space.
Throughout his life he dedicated himself to artistic research that led him to create paintings on shaped frames, with which he established an unprecedented relationship with the surrounding space and a perceptive challenge with the observer.

Rodolfo Aricò’s works are composed of the cycles of Axonometries, Orphic Structures, Anomalies and Perspectives.
It is matter but also colour that is moulded to create something beyond materiality.
In Rodolfo Aricò’s works, for example, colour is sprayed using a pump normally used in the countryside to spray vines, which gives a new sense of depth.

THE DESCRIPTIVE GEOMETRY OF RODOLFO ARICÒ

Descriptive geometry is one of the central themes in Rodolfo Aricò’s work.
Influenced by Kenneth Noland, but also by the perspective experiments of 15th century Italian art, through his shaped canvases the artist constructs ‘object-paintings’, where colour acts as a medium to allow an emotional perception of the work that transcends the structural rigour of his works.

Rodolfo Aricò was a protagonist of Italian art in the second half of the 20th century. With his shaped canvases he emphasised the paradox of geometry as an instrument of representation, on a painting that presses on the edges.
Rodolfo Aricò’s works live of exactitude and instability, in a balance in which colour is knowledge of space, in a continuous tension between surface and depth.

The dissonant image of Rodolfo Aricò, which is also the title of an exhibition celebrating his work twenty years after his death, is a continuous balance between geometry, structure, colour and light. 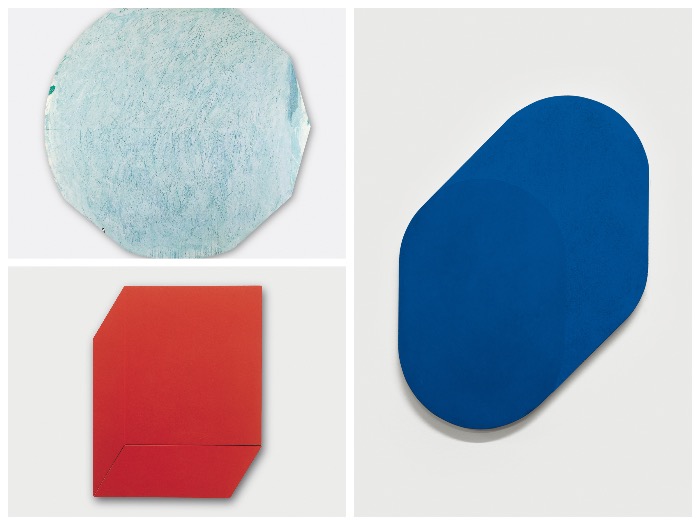 RODOLFO ARICÒ AND THE SIXTIES

The 1960s were particularly important for the artist.
In 1964, Rodolfo Aricò’s works were presented at the XXXII Venice Biennale.
On this occasion, the artist exhibited Trittico dell’esistenza, a work consisting of three large canvases in which the rhythmic scattering accentuates his temporal research.
The serial rhythms are identified in the square shapes placed on a diagonal guideline.

In 1965, animated by Delaunay’s ‘Orphic’ poetics, he conceived an archetype in the phenomenon of two displaced discs, in which the circumference of one passes through the centre of the other. In the same year, he participated in the 9th Quadriennale in Rome, on which occasion the Galleria Nazionale d’Arte Moderna acquired his work Work in Progress. Delaunay’s ‘simultaneous forms’.

In 1968, he was invited to the XXXIV Venice Biennale, which entrusted him with an entire room in which he created an environmental space consisting of large works from which the structural character of his object-painting emerged.