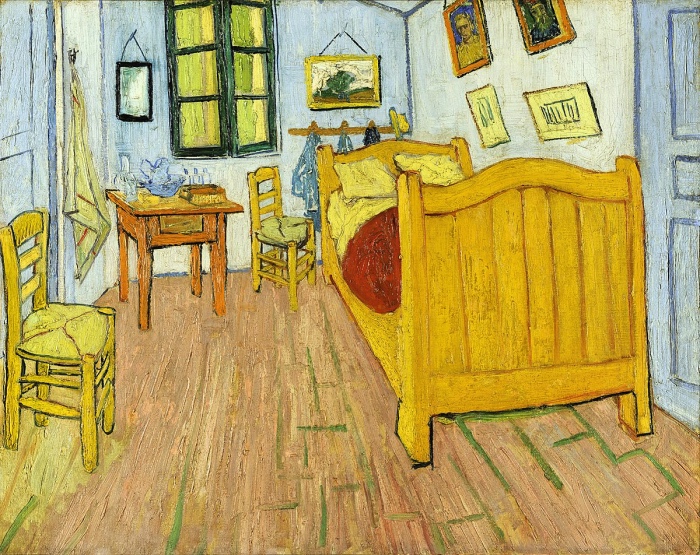 BEDROOM IN ARLES BY VAN GOGH: 5 THINGS TO KNOW ABOUT THE PAINTING AND WHERE TO SEE IT

Do you know the famous painting entitled Bedroom in Arles by van Gogh and do you know its meaning?
In this post you’ll find an in-depth study in five points on one of the most famous paintings by Van Gogh, of which there are three versions housed in some of the most important museums in the world.

Bedroom in Arles by van Gogh

WHEN VAN GOGH PAINTED HIS BEDROOM

Van Gogh painted, between 1888 and 1889, three similar paintings depicting his bedroom in Arles.
The artist, as soon as he arrived in southern France, rent a room in Arles and here discovered the power of colour and began using it on his canvas like an expression of his own feelings.
His stay in Arles was short, but it was a so intense period that the French city has linked forever its name and landscapes to van Gogh. You can’t think of Arles without thinking at least of one of the paintings the artist painted in this city.

In October 1888 van Gogh painted the first canvas where he depicted his bedroom in Arles, and his enthusiasm was so immense that he wrote to his brother Theo:

“I think this bedroom is my best work”

Bedroom in Arles by van Gogh is a serene environment for the artist, and the composition and colours are thought by the artist to communicate all his positive feelings he had at that time.
For example, the artist painted the version housed in the Musée d’Orsay for his family, so that they could feel the serenity that place gave him.
Actually, his mood swings were the order of the day and short time later he would die (in 1890).

DESCRIPTION OF BEDROOM IN ARLES BY VAN GOGH

Van Gogh’s aim was not to describe faithfully his bedroom and objects it housed.
In fact, for the artist the photographic reproduction of reality was not interesting, because he wanted to express what he felt in that moment. So, the representation of Bedroom in Arles by van Gogh is a way for the painter to express, through colours, his feelings.

The painter used complementary colours: red and green, yellow and purple, blue and orange. In addition, he used black and white to give the painting more balance, while it was van Gogh himself who suggested to his brother that he should use a white frame to make the whole composition stand out.

MEANING OF BEDROOM IN ARLES BY VAN GOGH

Portraying his bedroom, van Gogh wanted to communicate an intimate and quiet atmosphere, but it was also his first step towards the creation of a circle of artists who had to reach him in Provence and join him to give birth to a new painting.
The one, and only, who reached van Gogh, in autumn 1888, was Paul Gauguin who left after few months, because of incessant quarrels and van Gogh’s fragile mental health.

BEDROOM IN ARLES BY VAN GOGH: WHERE TO SEE THE PAINTING

There are three versions of Bedroom in Arles by van Gogh housed in three different museums.
One hangs in the Van Gogh Museum in Amsterdam, other is on display at the Art Institute of Chicago, and the third is housed in the Musée d’Orsay in Paris.

The three versions of Bedroom in Arles by van Gogh