THE PORTRAIT OF CARAVAGGIO AT THE ROYAL PALACE OF NAPLES

If you visit the Royal Palace in Naples, don’t forget to look for Caravaggio’s portrait, which can be found in one of the oldest frescoed vaults in the palace.

The artist who frescoed the vault, and who painted the portrait of the great master, is Battistello Caracciolo. One of the most important 17th century Neapolitan artists, who more than any other incorporated Caravaggio’s teachings when he came to Naples. 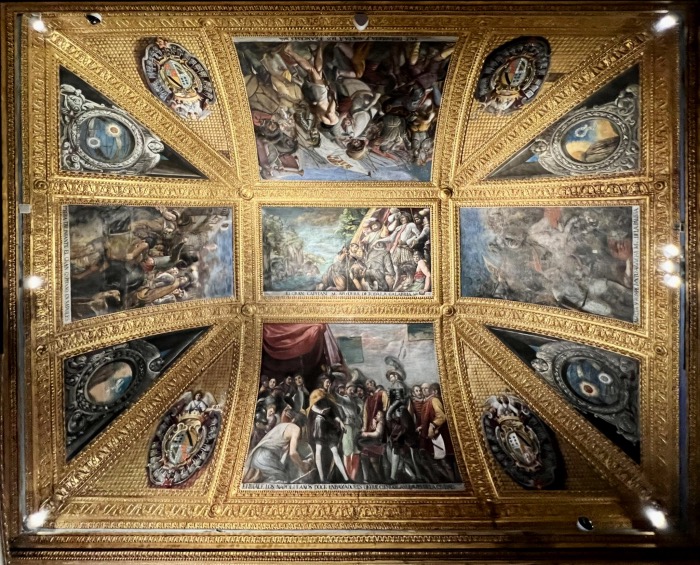 At the Royal Palace in Naples, there is a room whose vault was frescoed by Battistello Caracciolo with the stories of the first viceroy of Naples, Gonzalo Fernández de Córdoba known as the Gran Capitano.
The frescoes in the Great Captain’s room are beautiful and hide a secret: a famous portrait.

One only has to raise one’s eyes to the sky and scan the frescoed vault to recognise, among the figures depicted in the panel with the scene depicting The Meeting of Gonzalo de Córdoba with the ambassadors of Naples who offer him the keys to the city, Battistello’s portrait of the great Michelangelo Merisi da Caravaggio, of whom the Neapolitan painter was one of the first followers.

There is in fact a man’s face, with a black moustache and goatee, protruding between two figures in the centre of the scene and bearing the recognisable features of Caravaggio.
This portrait is a tribute by the Neapolitan painter to his ideal master, as Battistello was one of the few painters who experimented with Caravaggio’s innovations in fresco technique.

THE FRESCOES OF THE CAPTAIN’S VAULT

The frescoes in the Captain’s vault depict Stories of the Great Captain Gonzalo Fernández de Córdoba, who after twice defeating the French army became the first Spanish viceroy of Naples (1504-1507).
The corners show the coats of arms and deeds of Don Pedro Fernández de Castro, 7th Count of Lemos, and place the frescoes in the period of his viceroyalty (1610-1616). It is therefore one of the oldest painted vaults in the Royal Palace of Naples, predating the two cycles frescoed by Belisario Corenzio in the second antechamber and the Ambassadors’ Room.

The frescoes, repainted in the mid-19th century and restored in 1990, depict the various stages of the Spanish military conquest of the Kingdom of Naples, led by Gonzalo Fernández de Córdoba, known as the Great Captain, as also indicated by inscriptions in Spanish: The Great Captain takes possession of Calabria (centre), assault on the French at Barletta (north wall), duel with Monsieur de La Palice at Ruvo (west wall, much ruined), meeting with ambassadors from Naples who offer him the keys to the city (south wall), triumphant entry into Naples (east wall).

HOW TO SEE CARAVAGGIO’S PORTRAIT IN NAPLES

To visit the vault of the Sala del Capitano and see Caravaggio’s portrait in Naples you must enter the Royal Palace. Choose a date from the calendar and book your entry.

You can also take the opportunity to visit other places of artistic and historical interest in and around Naples.