GUSTAVE CAILLEBOTTE AND THE FLOOR SCRAPERS

Gustave Caillebotte and the Floor Scrapers are the most representative example of how much artists and masterpieces are ignored by the general public and which, instead, are more significant than they look.
Gustave Caillebotte is the Impressionist painter who more than others was overcome by Claude Monet and for this reason he is considered almost an amateur painter.
But it was thanks to Gustave and his brother that many paintings by the greatest Impressionist artists found a place in the French national collections.
The Caillebotte brothers, wealthy bourgeoises, bought several artworks to help the movement when nobody else wanted them.

In 1875 Caillebotte painted The Floor Scrapers, a work which is the manifesto of the urban working class, and added Impressionism the subject matter of manuallabourjobs.
Inside a room three workers are depicted while working. Caillebotte loves focusing on the city and in particular on what’s happening inside rooms and houses.

Therefore he opens a door onto people living inside the buildings of Paris while his colleagues preferred immerse themselves in the nature, painting French landscapes and gardens.
Caillebotte’s tale of the Parisian everyday life doesn’t convey any social or moralizing message. City workers, who until then were ignored by art, became the protagonists of a painting, like some time before happened to peasants and humble country workers.

Caillebotte’s look is a magnifying glass of reality: that wood shaving, those woodworking tools on the floor, the bottle of wine on the table as a relief after labour, no details escape his careful gaze.

Caillebotte portrays the reality as a photographer, by reproducing faithfully what happens in real life.
He uses a view from above which allows him to maintain the perspective, with the floorboards heading to the back of the room where the space widens and the eye can observe other details.

Despite his poor fame, Gustave Caillebotte was a modern painter who was able to understand the importance of photography, which has been a big success in Paris since 1850, by drawing inspiration from framings, points of view and angles for his paintings.

Gustave Caillebotte and The Floor Scrapers describe a different Impressionism, which could tell with precision and in detail Paris in the mid-19thcentury, the modern man and the progress. 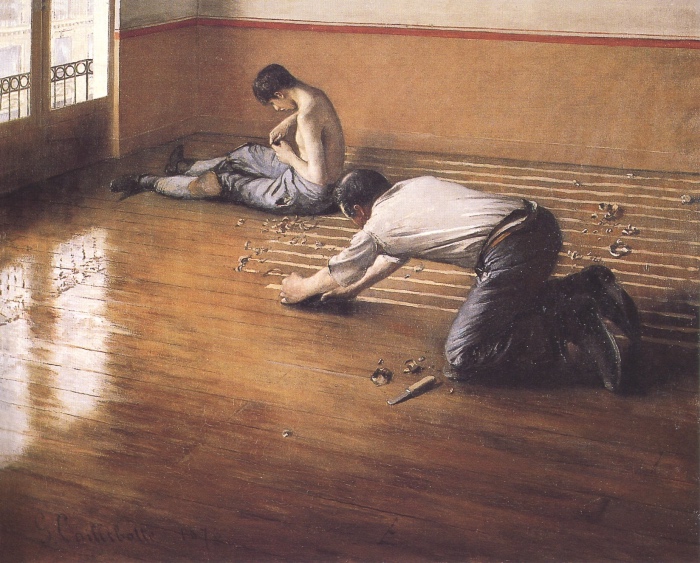 One thought on “Gustave Caillebotte and the Floor Scrapers”