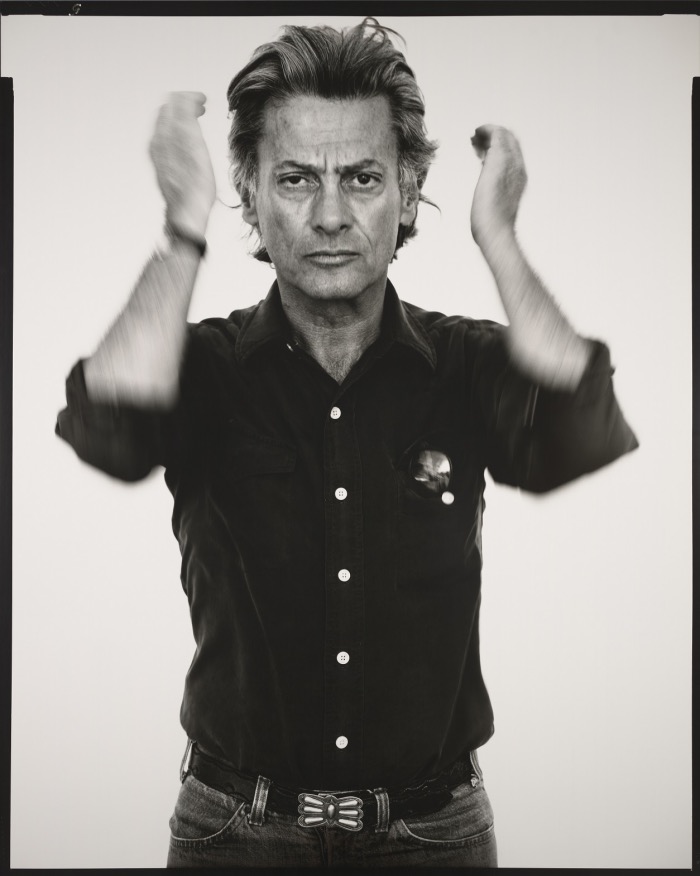 Richard Avedon’s portraits and photos are among the most innovative images of the 20th century.
Not only did Avedon revolutionise the way models were photographed, transforming them from static subjects to leading actresses of the set, showing their human side as well, but his striking celebrity portraits, in black and white and often in large format, were the first shots capable of revealing the innermost psychological side of the person portrayed.

For this reason, Richard Avedon is one of the undisputed masters of 20th century photography, who has taken photos that have made history and have that capacity, that only masterpieces have, to inspire in the observer the desire to create a story around that image, trying to build the plot of the events that happened before and after that shot.

The photographs of Richard Avedon 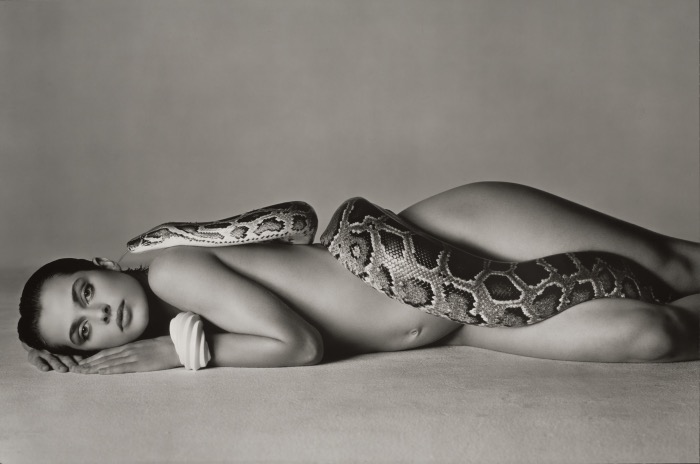 Richard Avedon’s early photographs (those before 1960) are more than just representations of clothes.
Created for the pages of women’s magazines such as ‘Harper’s Bazaar’ and ‘Vogue’, a publication he worked with until 1988, they transport the viewer into a world of glamour and fun in which women move casually through a life of leisure.
These cinematic images encourage the viewer to create a narrative and construct an imaginary plot.

Some of the scenes have a minimalist background and few environmental details, while others include locations and different ‘actors’.
In both cases, Avedon makes the viewer feel they are witnessing a more articulate story of leisure and pleasure, which the audience could even experience first-hand if only they had the right clothes.

Working primarily with a large format camera, he shot his subjects close enough so that they occupied a large section of the frame, reinforcing the viewer’s awareness of the negative space between figure and edge.
The interplay between figure and void, body and space, solid form and the defining power of the edge is key to the power of his images.

he appeal of Richard Avedon’s photographs is not only in their composition, but also in the sense of intimacy they evoke.
Avedon creates powerfully descriptive portraits that bring the viewer closer to the subjects portrayed. The ability to see facial details, even the smallest ones, places the observer at a distance usually reserved for spouses, lovers, parents or children.
For instance, in the photograph The Sculptress Louise Nevelson, New York, 13 May 1975, we can admire the seventy-five year old artist’s very short haircut, the way her eyes peer out at us from behind heavily mascara-covered eyelashes, the subtle shimmer of her lip-gloss or the beautiful appliqués on the sleeves of her overcoat.

THE PORTRAITS OF RICHARD AVEDON

When it comes to portraits, Avedon is known for his particular style, developed from 1969 onwards.
Among the salient features of his approach was his use of a white background, which allowed him to eliminate the potential distracting elements of a given photographic set in order to emphasise the qualities of pose, gesture and expression. An example of this is the 1981 photograph of Nastassja Kinski, softly lying on the floor and embraced by a snake.

There were many supermodels with whom Avedon worked intensively and who completely changed the way fashion photography was done.
The favourite was Dovima but there were also China Machado, Suzy Parker, Jean Shrimpton, Penelope Tree, Twiggy and Veruschka.
Her extraordinary affinity with Dovima, for example, resulted in spectacular images, such as the iconic Dovima with elephants.
A series of images depicting Penelope Tree or Jean Shrimpton, on the other hand, reveal how Avedon knew how to exploit the particular qualities of a model’s face or body, and how he could transform the subject through different locations and outfits to make them impersonate distinct roles and characters. 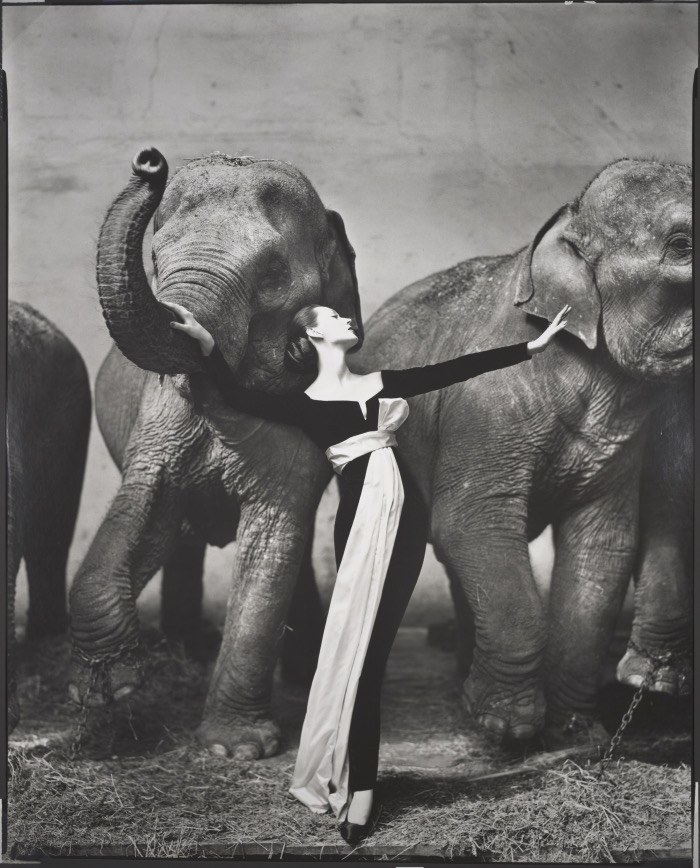 Avedon was able to photograph many of his subjects years later. This was the case with the painter Jasper Johns in 1965 and 1976, the writer Carson McCullers in 1956 and 1958, the politician George Wallace in 1963 and 1976, the poet Allen Ginsberg in 1963 and 1970.
But the most striking case of a photographic relationship prolonged over time is perhaps that involving his friend Truman Capote.

Avedon first photographed Capote in 1949. Then, in 1959, the two collaborated on Avedon’s first book, Observations, a collection of portraits of celebrities, including opera singer Marian Anderson, painter Pablo Picasso and marine scientist and explorer Jacques Cousteau. The book was accompanied by an essay by Capote and his comments on the photographs, while the graphics were by Aleksej Brodovič, the legendary art director of ‘Harper’s Bazaar’.
Capote and Avedon worked together again the following year. While the writer was in Garden City, Kansas, writing In Cold Blood, Avedon joined him on four separate occasions to photograph alleged murderers Perry Smith and Richard “Dick” Hickock, awaiting trial.

In Truman Capote, New York, 10 October 1955, the writer was only thirty-one years old. The image shows him undressed, his eyes closed and his arms behind his back, his chin shaved. The pose chosen by the photographer emphasises the vulnerability of the young man, laid bare in front of the observer’s inquisitive and complacent gaze.
The last portrait of Capote, now in his fifties, dates back to 1974.
The supple sensuality of the previous photo has now disappeared.
Avedon now focuses on the writer’s head, which fills most of the frame and is off-centre.

Richard Avedon’s photographs for Versace describe the unique relationship that was created between the fashion designer and the photographer, which led to the creation of images destined to become timeless.
Something very similar happened between them to what happened with Oliviero Toscani’s photographs for Benetton, namely they managed to create stories that went beyond the narrative they were originally intended for, linked to the seasonality of fashion, to revolutionise the history of photography.

Through his gaze, Avedon was one of the few photographers to interpret the avant-garde of Gianni Versace, illustrating the style and elegance of the Italian fashion designer, as well as the radical nature of his fashion.
With his photos, Richard Avedon exalts the figures by making them absolute and by making the choreography of the bodies of some of the most celebrated supermodels of the time explode in convulsive, syncopated movements that highlight the form and materiality of the clothes they wear.
From this point of view, the campaign for the spring/summer 1993 collection, starring Linda Evangelista, Christy Turlington, Kate Moss, Aya Thorgren, Shalom Harlow, was innovative and shocking.

From 22 September 2022 to 29 January 2023, the Palazzo Reale in Milan celebrates Richard Avedon (1923-2004) with an exhibition entitled Richard Avedon: Relationships that traces his more than 60-year career through 106 images from the collection of the Center for Creative Photography (CCP) in Tucson (USA) and the Richard Avedon Foundation (USA).

The exhibition allows us to delve into the innovative characteristics of Avedon’s art that made him one of the most influential authors of the 20th century; if on the one hand, he revolutionised the way of photographing models, transforming them from static subjects to actresses protagonists of the set, also showing their human side, on the other hand, his surprising portraits of celebrities, in black and white and often in large format, are capable of revealing the most inner psychological side of the person portrayed.

The exhibition promoted by the Municipality of Milan-Cultura, produced and organised by Palazzo Reale and Skira Editore in collaboration with the Center for Creative Photography and the Richard Avedon Foundation is curated by Rebecca Senf, head of the Center for Creative Photography’s collection, and has Versace as its main partner and Vogue Italia as its media partner.

The catalogue is published by SKIRA editore.