THE NEW STILL LIFE IN THE WORKS OF ENRICO MINGUZZI

Enrico Minguzzi’s works are inspired by an artistic genre in vogue in the 17th and 18th centuries and renew it: still life.
His are new forms, with new ‘natural’ objects and new colours.

The works of Enrico Minguzzi

The last great exponent of Natura Morta was certainly Giorgio Morandi, now it is Enrico Minguzzi’s turn to bring back a forgotten and somewhat underrated artistic genre.

In Enrico Minguzzi’s works, the objects are placed in the centre of the scene, on risers or vases resting on a plane. The predominant colour is grey in various shades, but it is the relationship between the painted object and nature that disorients and makes these still lives something new.

Enrico Minguzzi describes parts of the ‘natural’ world and transforms them into still lifes, extracts them from the environment they belong to and offers them the possibility of becoming objects in their own right, different from what they were originally.
Enrico Minguzzi’s works can be seen as portraits of elements taken from the mineral and plant world: stones, concretions, flowers and herbs, all of which can be traced back to something that really exists in nature, but is actually the result of a vision, perhaps a dream, of the artist.
It is a new still life that seems more alive than ever.

Enrico Minguzzi (Cotignola, Ravenna, 1981), after graduating from the Academy of Fine Arts in Bologna with a thesis entitled L’inattualità della pittura, moved to Milan where he held his first solo exhibition Liqueforme, at the Studio d’Arte Cannaviello in 2008.

Before creating a new still life, there was landscape in Enrico Minguzzi’s works.
He devoted himself to depicting the places where he was born and lived, the plains of the Lidi of Ravenna that run through the lagoon to the Adriatic Sea, below the Po River delta.
His landscapes describe atmospheres reminiscent of Turner’s works and in which the elements of water, air, earth and fire are rendered using dark colours enlivened by patches of fluorescent colour, which could be berries, flowers, fireflies, but also fatuous fires, sparks of a fire smouldering in the brushwood.
Magical or perhaps natural elements that have always been a part of his work and have also found their way into Minguzzi’s still life.

From these elements, in fact, the artist has drawn the characteristic features of his still lives, which look like plants and flowers of an undefined species, perhaps real but probably imaginary.

Enrico Minguzzi’s works, landscapes and still lifes, have already been exhibited in solo and group exhibitions.
He has realised site-specific projects and residencies at Areacreativa42 (2019) and Museo Civico Luigi Varoli (2020), where the new ‘still life’ cycle originated.

Since 2014, in parallel with his artistic work, he has been a founding member of the MAGMA collective, in which he develops projects combining visual arts, musical research and territorial investigation. 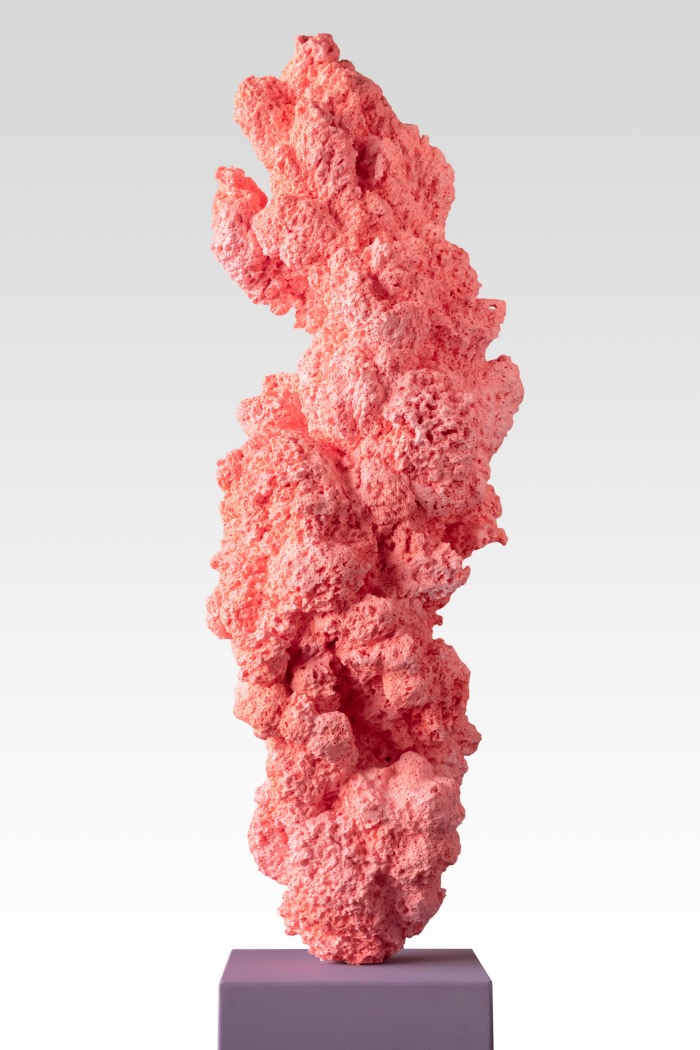 Now the artist seems to be ready for a new phase and has decided to try his hand at sculpture to give three-dimensionality to these still lifes, which now seem to want to leave the paintings and start a new life.

On the occasion of the exhibition Enrico Minguzzi. La piena dell’occhio (The Fullness of the Eye) presents some sculptures and finds a three-dimensional extension to the figures in his paintings.