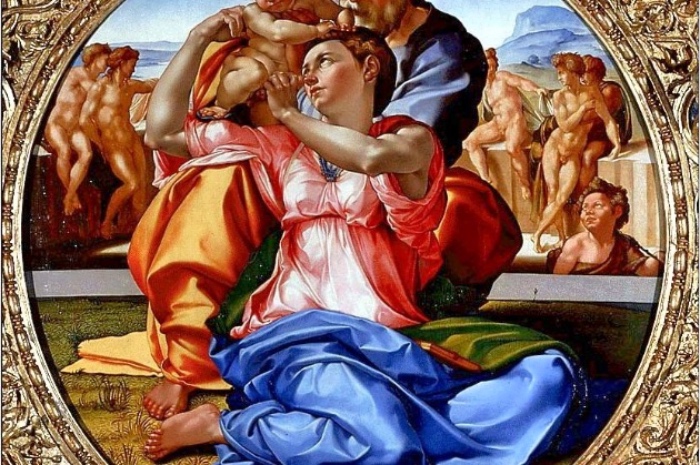 THE DONI TONDO BY MICHELANGELO: WHERE IT IS HOUSED AND WHAT IT REPRESENTS

Admiring for the first time The Doni Tondo by Michelangelo Buonarroti was thrilling. I was at the Uffizi Gallery for the traditional high school trip and when I came across it, I understood that art must be experienced at first hand. You must close the books and leave to admire art where you can admire it!

After a feeling of wonder,I wanted to know everything about this masterpiece, and after writing the post dedicated to Michelangelo’s David, it was time to talk about Buonarroti’s most amazing painting.

The Doni Tondo by Michelangelo: where it is housed and what it represents 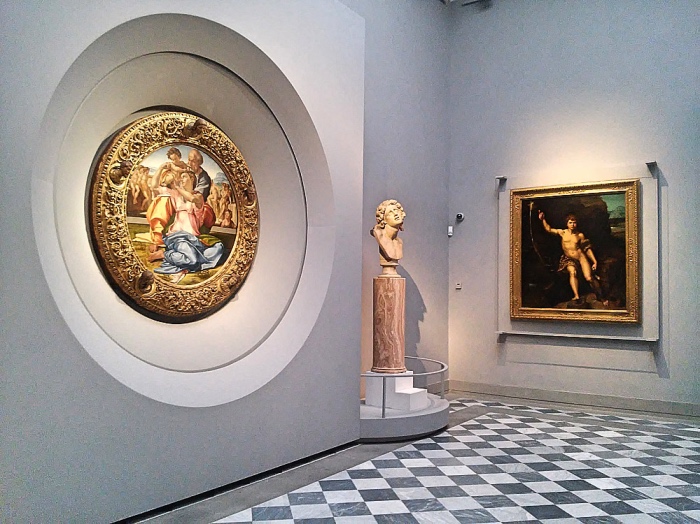 The Doni Tondo at the Uffizi Gallery.

After the sculpture of David, a new masterpiece came from Michelangelo’s mind and hands, but this time is a painting, the Doni Tondo.
The work was commissioned by Agnolo Doni, who wanted a representation of the Holy Family.

THE DONI TONDO BY MICHELANGELO: WHAT IT REPRESENTS

We don’t know on which occasion the painting was made. Maybe on the occasion of the marriage between Agnolo Doni and Maddalena Strozzi, whose coat of arms appears on the frame, or the birth of their daughter Maria in 1507.
However, Michelangelo painted a Holy Family in which the figures look like sculptures, the colours are gaudy and the twisting of the bodies will inspire future generations of artists, up to the present day.

The beauty and the importance of this painting lie in the central part where Mary, Joseph and the child Jesus are like a sculpture group. Behind them you can see Saint John the Baptist, and in the background the young nude figures which foreshadow the sculptures of the Prisoners for the tomb of Pope Julius II.
To Michelangelo the best painting was that similar to sculpture, there’ s no doubt about it!

THE DONI TONDO BY MICHELANGELO: CURIOSITIES

But you know that I do love stories illustrating artworks and the Doni Tondo by Michelangelo has a marvellous story which is worth knowing.
When the painting was finished Michelangelo gave it to Agnolo Doni, who didn’ t want to pay the agreed-upon amount.
Let’s say that he wanted a small discount!

Doni was a merchant and believed that he could fetch a lower price. But, obviously, he didn’ t know who he was dealing with, or underestimated Michelangelo’s pride, who, in fact, meant the fact that the patron didn’ t want to pay the full amount as a personal insult.
So, the artist got the painting back and brought to his home, telling Agnolo Doni that the price had changed and he had to pay double for it.
The only thing the merchant could do was pay, and so he neither got a discount nor a good bargain. He had to pay the double amount!

This is the first recorded case of an artist opposing his patron and demanding not only his payment but also putting himself in a higher position and treating the merchant as a “client”.
Michelangelo was a great artist even in this situation and changed the market rules.

THE DONI TONDO BY MICHELANGELO: WHERE IT IS HOUSED

The Doni Tondo by Michelangelo is housed and on display in the Uffizi Gallery in Florence, and is still in its original frame, which is a very rare thing in so ancient masterpieces, and it has been assumed that it was carved following a drawing made by Michelangelo himself.
It’ s a refined frame containing, among decorations and leaves, the coat of arms of the Strozzi family and heads of Christ, angels and prophets. 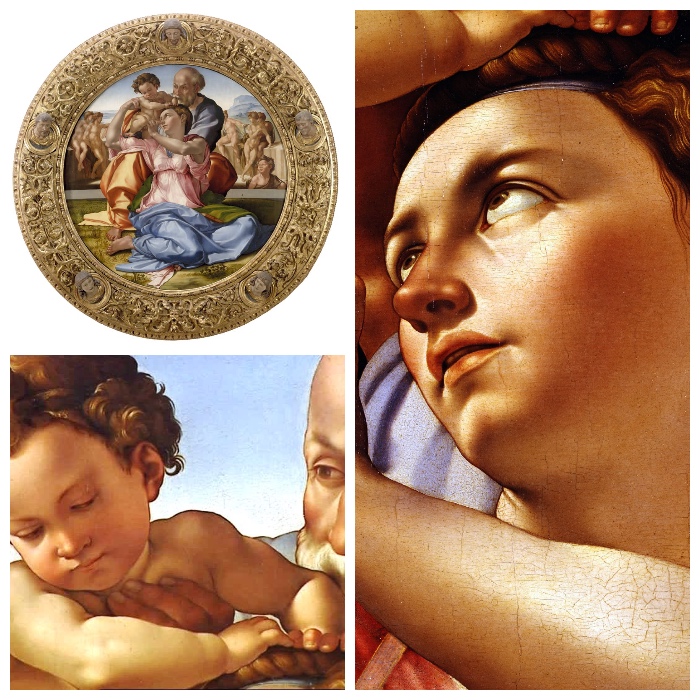 READ ALSO – Michelangelo’s works: which ones they are

5 thoughts on “The Doni Tondo by Michelangelo: where it is housed and what represents”