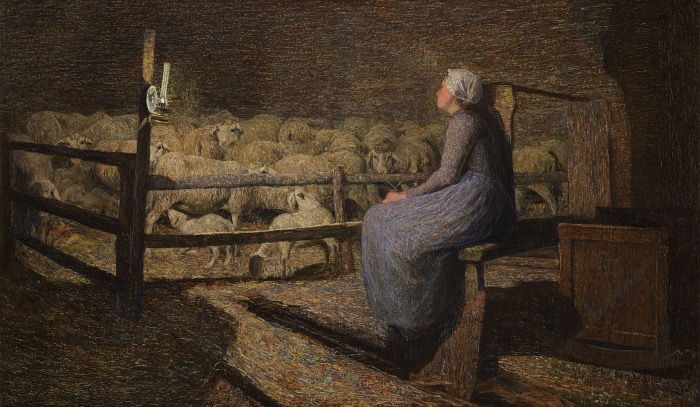 GIOVANNI SEGANTINI’S SHEEPFOLD: A MASTERPIECE WAITING TO BE DISCOVERED

The painting All’ovile by Giovanni Segnatini is one of Segantini’s masterpieces of Italian Divisionism and late 19th century European painting.
It is a painting in which the artist used both the Divisionist technique and the addition of gold in the brushstrokes to give it a symbolic value.

All’ovile is one of three paintings that focus on the effects of artificial light in a stable and, being the last, concludes this quest.

At the Barn by Giovanni Segantini 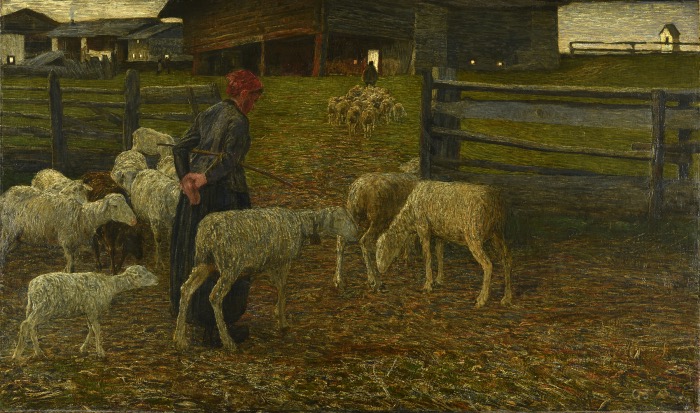 Giovanni Segnatini’s All’ovile is part of a cycle of three paintings dedicated to the effects of lantern light in an enclosed, dark environment that re-propose, in a modern, experimental language, the 17th century luminist tradition, the one seen in the works of Caravaggio to be precise, but also observed in Flemish painting, which Segantini knew well.

TO THE FOLD AND THE CYCLE OF THREE PAINTINGS

The first of the works in this cycle is also the most monumental: ‘The Two Mothers. Studio di lanterna’ of 1889, which is in the Civica Galleria d’Arte Moderna in Milan.
The second is ‘All’arcolaio’, from 1891, and has been in the National Gallery in Adelaide, Australia, since 1898.
The third is ‘All’ovile’, of 1892, in which the magical effect of the light enveloping the scene is more successful because it gives the painting a more intimate dimension.

Segantini was fascinated by the light that a lantern reproduced in an interior and associated a symbolic value to this element, so much so that he reproduced it in many works.

SEGANTINI’S SHEEPFOLD AND THE DIVISIONIST TECHNIQUE

With regard to the Divisionist technique, in All’ovile by Giovanni Segantini, light is realised using dashes of pure colours juxtaposed, and the artist also used gold in powder and particles incorporated into the fresh mixture. A stratagem that allowed him to accentuate the vibrations of light.

As always, Segantini’s ability to find the true essence of things and their physicality is striking: from the fleece of the sheep to the fabric of the woman’s dress, to her face and the wood of the manger and cradle.

SEGANTINI’S OTHER WORKS ENTITLED ‘RETURN TO THE FOLD

If the light from the lantern inside the stable is a symbol of warmth, security and respite, even if only temporary, from the toils of the shepherd’s life, Return to the Shepherd’s Fold of 1888 depicts instead an exterior dominated by the cold, hostile light of an autumn twilight. The atmosphere of sadness and resignation, accentuated by the curved figure of the tired shepherdess returning from work, is mitigated by the brightly lit entrance to the stable, a promise of shelter and rest.

In the later drawing Return to the Barn of 1891-1892, the same motif is represented in a symbolically accentuated form.

By the time Segantini painted ‘At the sheepfold’, he had already moved to Switzerland a few years earlier with his family.
In August 1886, the painter settled with his family in Savognin, a mountain farming village in Oberhalbstein (Canton Graubünden), after a long exploratory trip.
It was above all the mountain landscape with its intense light that fascinated Segantini and induced him to reproduce the beauty of nature in art, to search for a new pictorial language that he enriched with symbolic content over time.

The nature in which he immersed himself, his continuous experimentation and a spirit free from academic conventions, led Segnatini to create alpine landscapes as allegorical visions of rare luminosity, which were a great success among the collectors and art critics of the time.

After eight years in Savognin, Giovanni Segantini moved to the Engadin with his family. In 1894, he rented the Chalet Kuoni in Maloja, but in 1899, at the age of 41, the artist died suddenly of peritonitis while on the Schafberg mountain above Pontresina, while he was working on the central painting of his ‘Nature Triptych’. 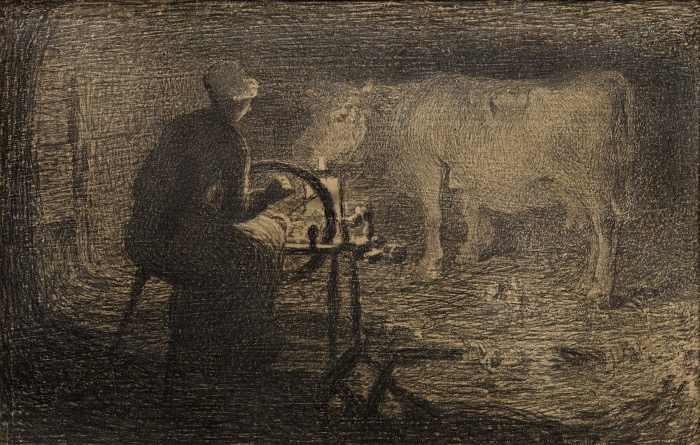 All’ovile makes its first appearance in Switzerland, at the Segantini Museum in St. Moritz, after a long period of absence from the scene.
The occasion is a dossier exhibition that, in comparison with the photographic documentation, witness to the scientific investigations conducted by the two Italian scholars Davide Bussolari and Stefano Volpin, allows us to discover its slow genesis, from the blank canvas to the final result.

GIOVANNI SEGANTINI. AT THE OVILE.
Genesis of a masterpiece
20 May – 20 October 2022
St. Moritz (Switzerland), Segantini Museum

All’ovile is one of Segantini’s masterpieces of Italian Divisionism and late 19th-century European painting.
The painting boasts a rich exhibition curriculum: from the Grafton Gallery in London in 1893, to the retrospective in Room 3 of the 15th Venice Biennale in 1926; then, the exhibition organised by Antonio Maraini in 1935 at the Musée du Jeu de Paume in Paris; finally, the XXVI Venice Biennale in 1952 and the room dedicated to Italian Divisionism.
Since then, Giovanni Segantini had disappeared from exhibition stages, until he was exhibited at the Castello Visconteo Sforzesco in Novara in 2019, for the exhibition ‘Divisionism. The Revolution of Light’.