Magritte’s kisses and lovers are frequent themes in the surrealist artist’s paintings.
There is one work, however, that still fascinates today as the two lovers depicted have their faces covered by a white cloth and one cannot help but wonder why and what the meaning of the painting is 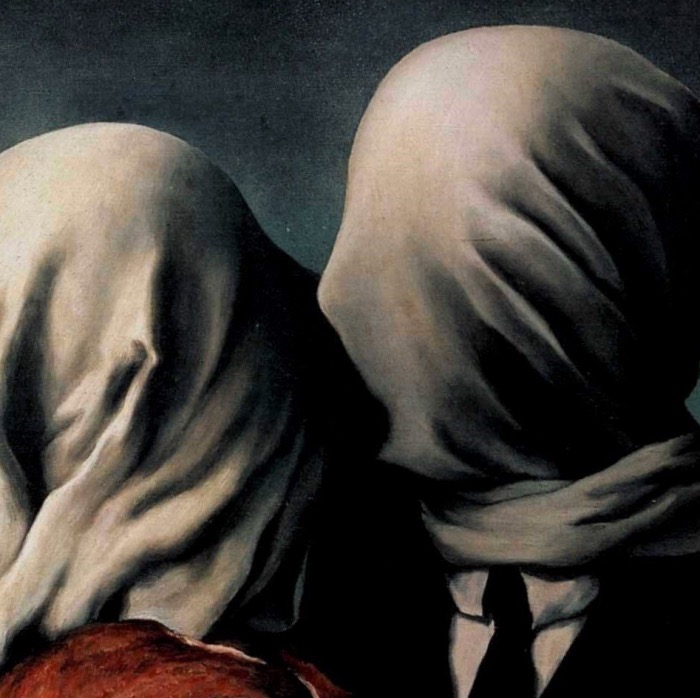 The key event in Magritte’s life was the suicide of his mother, which occurred when the artist was twelve years old.
René Magritte’s mother had thrown herself into the Sambre River and when she was recovered, her face was hidden by her nightgown.
That tragic event shook the artist’s life forever and he never ceased to remember his mother in his works.

There are two versions of Magritte’s Two Lovers, one held at the MoMA in New York and the other at the National Gallery of Australia.
In the painting, the two lovers are exchanging a passionate kiss but are each separated by a white cloth, which covers their faces.
Not only can we viewers not see who they are, but their kiss is almost virtual because their lips are never meant to touch, separated as they are by two white cloths.

The location of this man and woman is undefined.
We guess that they are either in a room or in a room looking outwards. Impossible to determine for sure as what could be the back wall has a colour similar to a leaden sky.

The white cloths covering the faces of Magritte’s two lovers, but also the concealed faces (e.g. by an apple) are an element that Magritte often used in his paintings.
This could be a clear reference to his mother’s suicide, but also a reference to the complex question of the visible and the invisible.
For instance, the artist wrote in 1929 in ‘Words and Images’:

An object may imply that there are other objects behind it.

The love of Magritte’s lovers is silent and speaks to us of death and, above all, of incommunicability, another theme dear to an Italian artist and much loved by Magritte such as De Chirico.
Indeed, looking at the Belgian artist’s painting of the two lovers, one cannot help but think of one of De Chirico’s most beautiful works: Hector and Andromache.
Also in that work, from a few years earlier, the two mannequins attempt to approach each other but their embrace is almost impossible. 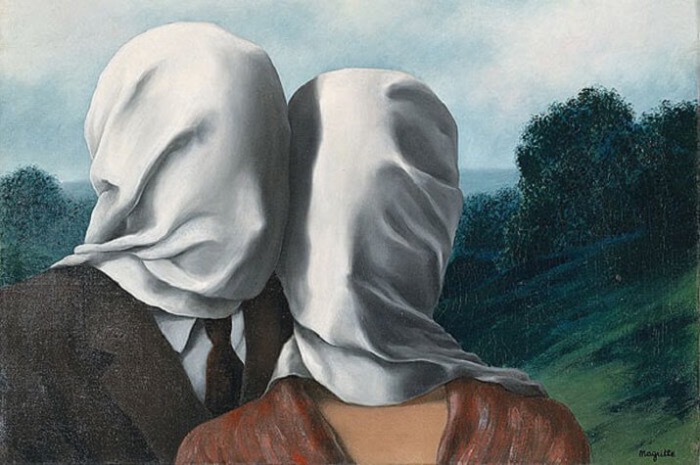