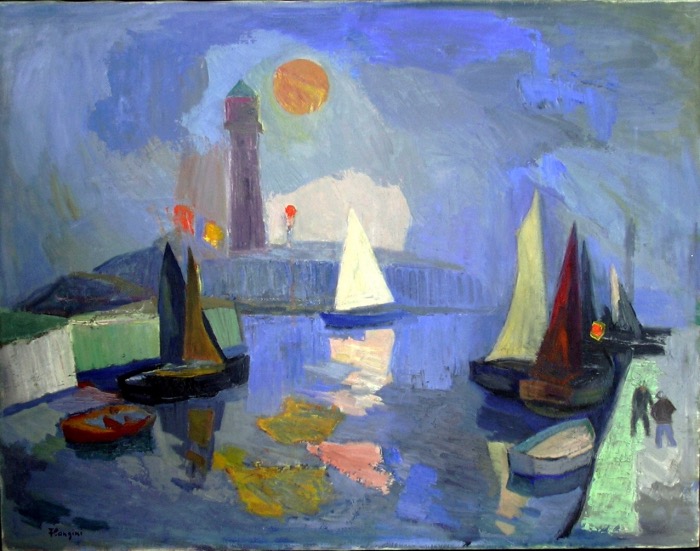 TALES OF LIGHT AND COLOUR IN THE WORKS OF GIUSEPPE FLANGINI

It is the tales of light and colour that prevail in the works of Giuseppe Flangini, who has left his mark on the history of art.
He was born in Verona, the first of five children, on 12 October 1898 to Silvio and Maria Sterza, a teacher, daughter of Alessandro Sterza, mathematician and inventor of the acetylene lamp, gold medal winner at the Brussels Exposition of 1897.

Dramatist, ceramist, illustrator as well as painter, Giuseppe Flangini had important relationships with the major artists of his time.

The works of Giuseppe Flangini 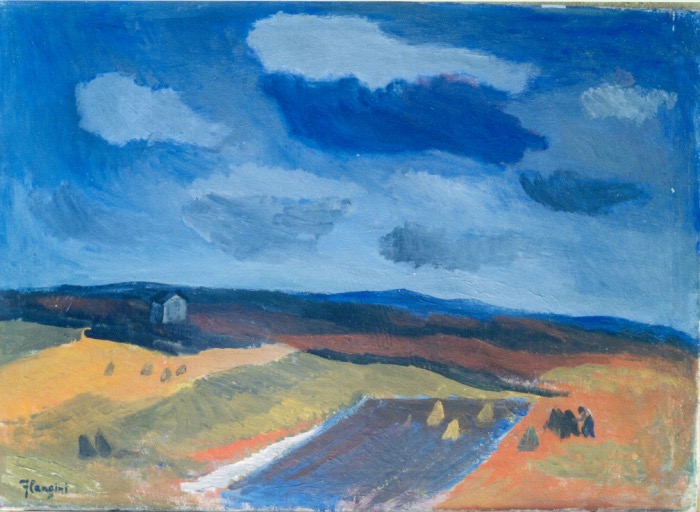 After graduating from the Scuola Normale ‘A. Manzoni’ in Verona on 27 June 1916, but having to support his mother and siblings, Giuseppe Flangini began his profession as an elementary school teacher, which he continued even after escaping to Milan, possibly in 1943, following a brief imprisonment in Fascist jails for political reasons: he had in fact collaborated with the Corpo Volontari della Libertà.

Giuseppe Flangini created posters and book covers, as an illustrator he collaborated with the Corriere della Sera, the Corriere d’Informazione, and the theatre magazine ‘Controcorrente’. As the author of dramas, for which he often also took care of the direction, creating the sets and the entire coordinated image, he won awards and recognition that made him well known in the philodramatic theatre circuit.

His lively exchanges of correspondence and animated discussions with his friends from the Gruppo degli Artisti di Corso Venezia – Il Caffè San Babila allowed him to develop a unique style and also a network of artistic relationships that enriched his life and artistic production.
In the 1950s, he frequented Carlo Carrà in Forte dei Marmi and, during his years of collaboration with the famous La Colonna Gallery, Migneco and Sassu.

Flangini’s first trips abroad began in 1922, to meet the relatives of his young wife, the painter Gina Zandavalli, who had emigrated to Belgium for political reasons. However, it was not until 1946 that he began to visit museums in Paris, Germany, Brussels museums and Amsterdam museums in search of the ideal masters.

When portraying the landscape, he paid particular attention to the environment characterised by water: numerous works have seascapes, Mediterranean and northern European seas, rivers and lakes as their subjects.
The mountain environment was almost exclusively Trentino, a reminder of the First World War in which he took part, the prison camp (almost two years in Austria) and two particularly happy seasons, the summers of 1959 and 1961.

On the other hand, the urban and industrial landscape returns frequently, the depiction of the work of miners in Belgium – then almost exclusively Italian – fishermen, dockers, breeders, sandmen and farmers.

GIUSEPPE FLANGINI AND THE CINEMA

From 1950 onwards, he deepened the expressionist matrix of his painting, especially after meeting Vincente Minnelli, director of the film about Van Gogh ‘Lust for Life’.
Flangini, following the troupe as ‘official’ painter, drew and painted actors, extras and Van Gogh settings.
During one of his summer stays in Belgium, he befriended Ensor in Ostend, with whom he often discussed art.
Paintings such as the Kermesse, i.e. the representation of popular masked festivals, are an ideal homage to the master as well as an exploration of a theme, that of the mask, which was very dear to Flangini, a man of the theatre.

The artist’s last years, from 1959 to 1961, were characterised by the birth of a new and felicitous chromatism that can be traced back to the experiences of the Fauves and Vlaminck in particular.
In works such as ‘Countryside in Charleroi’ (1961), ‘Windmill in Hetchel’ (1960), ‘Landscape in Gilly’ (1961) his vision of life seems to be more serene and the colours he uses most often are yellows, reddish ochres and browns, vivid and bright in a clear and clean atmosphere.

THE UNFINISHED WORK OF GIUSEPPE FLANGINI

‘Lighthouse of Ostend’ (1961) and above all ‘Mill at Bruges’, the artist’s last unfinished work on the easel of his studio at the time of his death, remain as testimony to the continuation of a research that is still open and vital’.

In August 1961, Flangini, after a short illness, died suddenly of colour poisoning.

THE SUCCESS OF GIUSEPPE FLANGINI

Guseppe Flangini was one of the Italian artists of the 20th century most represented in international exhibitions.
His artistic and painting career began at a very young age, with works that were immediately appreciated and important exhibitions.

Among the many he took part in during his lifetime were the Biennale Nazionale di Arte in Verona from 1921 to 1959; the Esposizione Nazionale Quadriennale d’Arte in Rome, the uninterrupted participation in the Palazzo della Permanente in Milan from 1948 to 1961.
After his death in 1961 from colour poisoning, there was still a long series of exhibitions in Italy and abroad (Amsterdam, Ostend, Munich, Sao Paulo, Brazil), around eighty, culminating in his participation in Belgium at the International Europalia 2003, where Flangini was chosen by the Ministry of Foreign Affairs to represent Italian art during the Italian six-month presidency of the EU, receiving the patronage of the President of the Republic and the King of Belgium.

The exhibition in the Complesso del Vittoriano commissioned by the City of Rome in 2008 and the one organised in Washington in 2012, promoted by the Italian Ministry of Foreign Affairs and the International Academy of Fine Arts, were also very important.
At the suggestion of his friends Carlo Carrà, Ernesto Treccani, Carlo Carpi and others, a few years after his premature death the City of Milan dedicated two important retrospectives to the artist, in 1967 at Palazzo Reale and in 1970 at the Arengario, now the Museo del Novecento.

THE WORKS OF GIUSEPPE FLANGINI ON SHOW

An exhibition scheduled in Milan, at Palazzo Pirelli, from 7 October to 10 November 2022 is dedicated to Giuseppe Flangini, who contributed to writing the history of 20th century Italian and international art.
An exhibition that was proposed in 2021 to commemorate the 60th anniversary of the artist’s death but was postponed due to anti-vice restrictions.